None of the tech companies on the Dow have outperformed the index since joining, which says as much about the Dow's methodology as it does about the stocks themselves.

From the day they joined the Dow onward, not one of these big tech stocks has outperformed the index, even when reinvested dividends come into play. IBM joined on June 29, 1979: 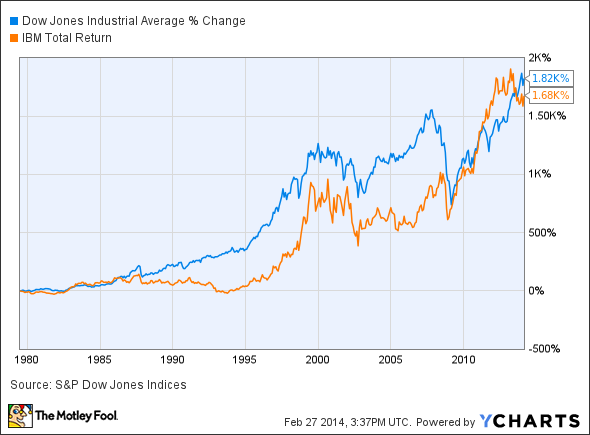 Microsoft and Intel both joined on Nov. 1, 1999 (which may be one of the worst possible starting points from which to assess their performance): 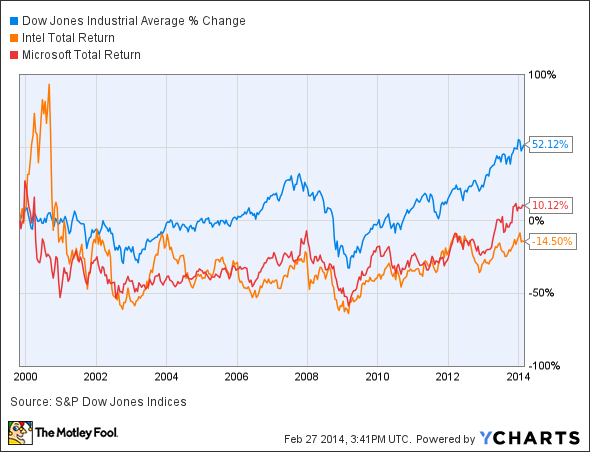 Cisco joined on June 8, 2009, just as the Dow was beginning a multiyear rebound from the worst financial crisis since the Great Depression. That should have provided ample opportunity for a beaten-down stock to outperform an index that is often a step behind the times, but that's hardly what's happened: 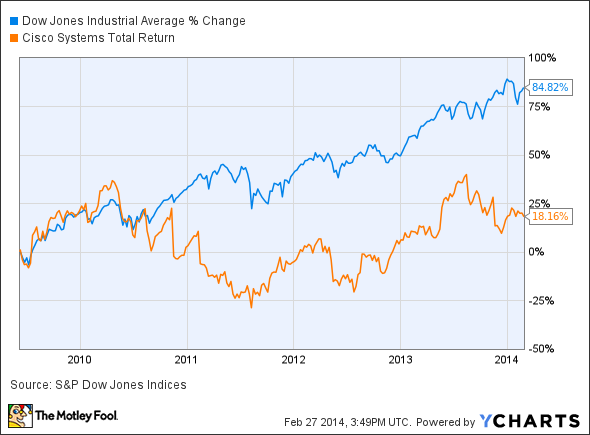 Four tech stocks, four underperformances. Why has the Dow gone zero for four in this sector?

One major reason is that all four of these companies were added after they claimed the title of "largest market cap on the market," or came pretty close. The New York Times awarded IBM that title in 1967, a full 12 years before it joined the Dow. By 1979, it was the second-most profitable company in America, behind only General Motors, despite generating only a third as much revenue as the carmaker. Microsoft and Intel were in similar positions in 1999 -- Intel crested $500 billion in market cap shortly after the start of the new millennium, while Microsoft reached its $616 billion peak market cap less than two months after it joined the Dow. Cisco's all-time peak market cap fell somewhere between Microsoft's and Intel's, and for a little while it held the market-cap crown as well.

That alone can't account for underperformance, but perhaps other factors can be blamed.

IBM's net income has grown from $3 billion in 1979 to $16.5 billion today, which seems impressive on the surface until you consider that this growth is weaker than that enjoyed by the rest of the American economy over the same time frame -- nominal U.S. GDP has grown by more than 500% since the end of 1979, compared to a 450% improvement on IBM's bottom line.

It's  a little easier to pinpoint why Microsoft and Intel have underperformed. Since joining the Dow, both companies have recorded a significant improvement in earnings per share, but at the same time, their valuations -- hugely inflated by the dot-com bubble -- have collapsed: 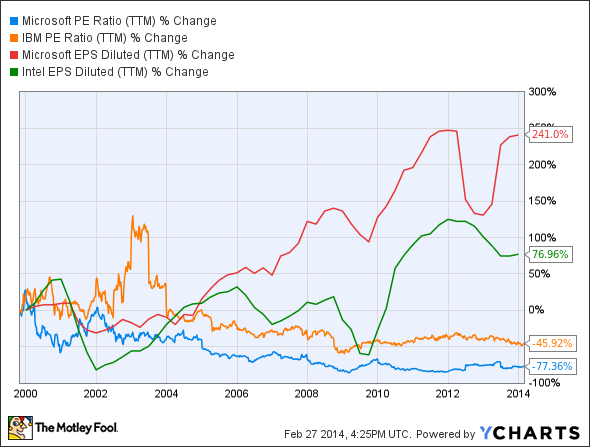 Both of these companies put together EPS growth that bests the growth of GDP (which is up 72% since the end of 1999), but they started their index tenure at such a high valuation that their share prices had nowhere to go but down once the bubble popped. Valuation does matter over the long run, regardless of what anyone says in the middle of a bubble-driven euphoria.

Cisco, on the other hand, had the misfortune to merely do OK earnings-wise during a period in which big business has done incredibly well. Its earnings growth since joining the Dow has been nothing to sneeze at, but as you can see, it's actually trailing the growth in overall corporate profits, as has been the case for much of the past five years: 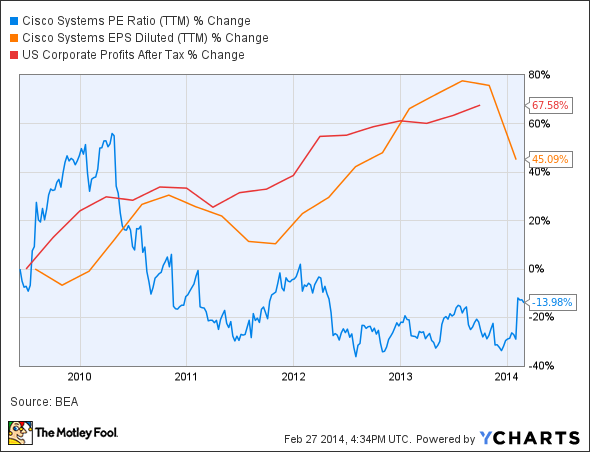 So why has the Dow gotten it wrong on tech stocks every time? In the end, it seems to boil down to two things: either the companies chosen don't have what it takes to sustain their earlier successes by the time they're inducted to the Dow, or they can't justify the valuations that helped bring them to the attention of the Dow's handlers in the first place. Does that mean that all tech companies the Dow might induct in the future will suffer the same fate? It may not -- but the Dow's focus on only the largest and strongest tech companies seems likely to prevent it from inducting long-term outperformers from an industry where being the biggest simply makes you an easier target.

Alex Planes owns shares of Intel. Add him on Google+ or follow him on Twitter @TMFBiggles for more insight into markets, history, and technology.

The Motley Fool recommends Cisco Systems, General Motors, and Intel. The Motley Fool owns shares of Intel, International Business Machines, and Microsoft. We Fools may not all hold the same opinions, but we all believe that considering a diverse range of insights makes us better investors. The Motley Fool has a disclosure policy.