When most investors think of advances in health care technology, they tend to think of fitness bands from Nike, fitness apps for Apple (NASDAQ:AAPL) iOS and Google (NASDAQ:GOOGL) Android devices, and native iPad EHR (electronic health record) apps from companies like Allscripts.

Yet Microsoft (NASDAQ:MSFT) is rarely mentioned, despite its notable presence in telehealth and EHRs. That's due to the fact that most investors recognize Microsoft for its Windows operating systems, Office software, Xbox consoles, and Windows Phones.

Although those businesses account for the majority of Microsoft's revenue, the company's growing footprint in hospitals shouldn't be ignored. The health care market could represent a new way for Microsoft to boost sales of its Windows operating system across desktops and tablets.

The connection between desktop and tablet EHRs
Microsoft controls more than 90% of the global PC market with five versions of its operating system, from Windows XP through Windows 8.1.

Microsoft's biggest problem is the lackluster adoption of Windows 8 and 8.1, which only have a combined market share of 10.6%, compared to the 47.5% for Windows 7 and 29.3% for Windows XP.

Since Windows is installed on the majority of hospital PCs, older EHR software was usually designed for Windows first. However, there are three major problems with traditional Windows EHR software:

To address these complaints, leading EHR providers such as Allscripts, Cerner, and Epic have developed "native" iPad apps that are tethered to the cloud, rather than a desktop workstation. 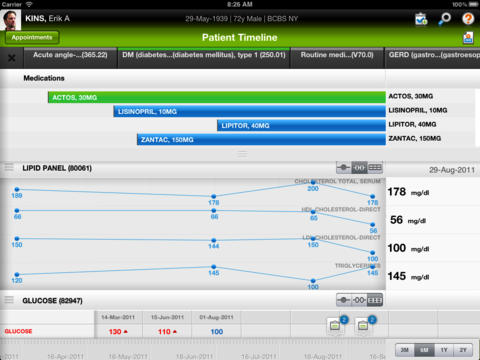 Allscripts Wand, one of the most popular native iPad EHR apps. Source: Apple.

iPads can be carried to the patient's bedside, onboard cameras can be used for patient documentation, apps feature simple touch menus, and backing up data over the cloud is more reliable than keeping it in an on-site desktop. In other words, native iPad apps completely cut Windows computers out of the equation.

Now that Microsoft is ending support for Windows XP in April, hospitals must upgrade their systems or risk security breaches. Since iPads are gaining ground in hospitals, hospital administrators could abandon more PCs in favor of iPads.

Offering the same experience on both platforms
Despite these challenges, Microsoft has one key advantage -- cross compatibility.

The same EHR app, for example, can be installed on a PC and tablet running Windows 8/8.1 (not RT). By comparison, an Apple user can't install a Mac program on an iPad or vice versa. When we combine Microsoft's cross-compatibility with the rise of Windows 8/8.1 hybrid devices -- which allow a user to detach the screen as a tablet -- we can see how Microsoft intends to respond to the rise of native iPad EHR apps. 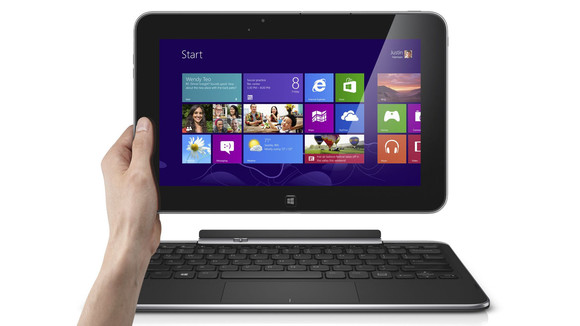 Dell's XPS 10, an example of a Windows 8 hybrid. Source: Techradar.com.

A physician working at a desk could use a keyboard within the EHR app, then detach the tablet screen while attending to a patient. This idea has appealed to EHR market leaders Allscripts, Epic, and Greenway.

Allscripts is the market leader in EHRs, according to a May 2013 report from SK&A, with an overall market share of 10.6%. Epic trails in third place with a 10.3% share, and Greenway is ranked 11th with a 2% share.

Microsoft also launched a Windows 8 version of its own cloud-based EHR, HealthVault, which can integrate other health tracking features with third-party EHR apps like PrimeMOBILE. 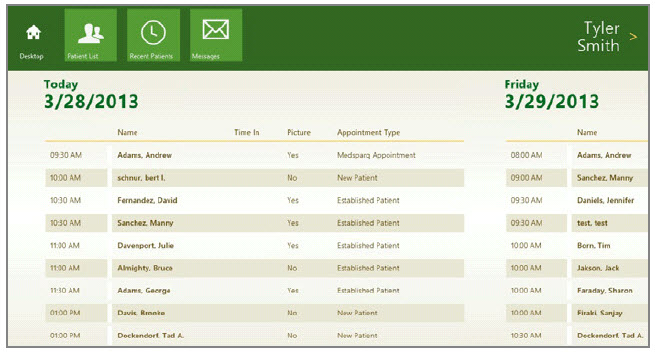 A second chance for the Surface
It's no secret that Microsoft's Surface, which originally launched in October 2012, is still considered a niche device by most consumers.

Last quarter, Microsoft reported that Surface (Surface, Surface RT, Surface 2, Surface Pro) sales more than doubled sequentially from $400 million to $893 million. However, Microsoft didn't report sales by individual units or types, which has led to estimates that the company actually sold less than 2 million Surface units during the quarter. By comparison, Apple sold 26 million iPads in its most recent quarter.

In terms of overall market share, Microsoft finished 2013 with a 3.4% share of the tablet market, compared to Apple's 35%, according to year-end numbers from IDC. Yet rising adoption of Windows 8 tablets/hybrids in hospitals could boost those numbers by the end of 2014.

Here are three major reasons that the Surface could eventually displace the iPad in hospitals:

Will Microsoft be able to offset weakness in global PC shipments, which fell 10% year over year in 2013, with this slow but steady growth in health care? Investors should keep an eye on these developments in Windows 8 EHRs and Surface sales to find out.