Target came into 2013 with high hopes. Instead, it had one of the worst years in company history.

Target just closed the books on one of its worst years ever.

First, Target underestimated the challenges of diving headfirst into the Canadian market, leading to big losses there. Second, Target's recent data breach, which compromised customers' credit cards and other personal information, caused a big loss of confidence in the retailer. Target's sales fell sharply after customers found out about this issue. Both of these problems could continue to cause headaches for Target in 2014 and beyond.

Target's Canadian dilemma
In early 2013, Target expected a relatively smooth launch for its 124 stores in Canada. The company's initial FY13 guidance called for $0.45 of EPS dilution from Canada, with half of that loss coming in the first quarter. Target expected to be profitable in Canada by year-end.

When Target finally closed the books on 2013, the company had a pre-tax loss of nearly $1 billion in Canada on sales of $1.3 billion. That caused EPS dilution of $1.13 for the full year.

So far, Target has had trouble changing Canadian shoppers' habits to drive frequent Target visits. This has led to weak sales performance, which in turn has caused a persistent inventory overhang. These problems culminated in severe clearance markdowns during Q4 that drove gross margin down to 4.4%. (30% is a typical gross margin rate for Target.)

On Target's recent earnings call, executives noted that the company managed to reduce inventory per store in Canada by 30% during the fourth quarter. That puts it in a much better position to reach a "normal" gross margin rate in 2014. Management also expects sales in Canada to double this year, as the Canadian stores were only open for a little more than half of 2013, on average.

However, that still won't get Target's Canadian operations anywhere close to breakeven. Based on the company's recent expense rate in Canada, Target would need to reach about $4 billion in sales to hit breakeven. In other words, even if sales double in 2014, Target would still need to drive 50% comparable-store sales growth to become profitable in Canada.

Target has a lot of work to do just to break even in Canada.

Target will probably be able to reduce that breakeven point a bit by optimizing its operating expenses over time as it gets more data on shopping patterns. Still, Target is years away from making money in Canada. The best investors can hope for in the meantime is that the losses will shrink each year.

The data breach: a big wild card
Before word got out that criminals managed to steal credit card numbers and other information from tens of millions of customers, Target was experiencing a solid fourth quarter. While many value-oriented retailers have been struggling recently, Target was tracking ahead of its guidance for flat comparable-store sales through mid-December.

It is impossible to predict how long it will take for Target to recover from the data breach. It's certainly plausible customers will decide to "forgive and forget" by the middle of the year. However, it's also possible it will take years to rebuild trust with customers, and Target may need to ramp up promotional activity in the meantime to drive store traffic.

This guidance suggests Target is banking on meaningful improvements throughout the year. Even so, the midpoint of the guidance fell below what analysts had expected. Surprisingly, Target stock still managed to climb 7% on Wednesday. (Perhaps some investors feared the earnings results would be even worse than they were.) 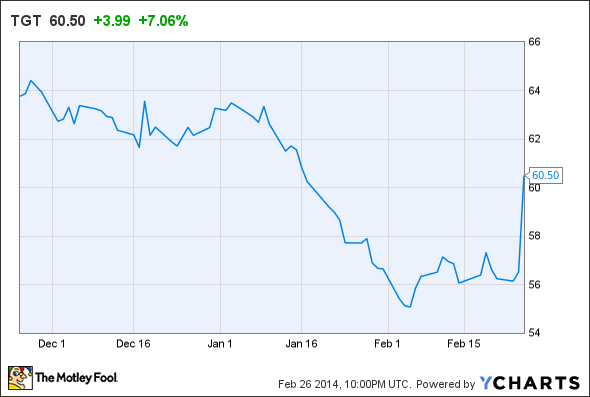 Target shares now trade for 15 times projected 2014 earnings. That seems reasonably cheap, assuming Target can quickly regain the trust of its U.S. customers while growing to profitability in Canada in the next two to three years. However, I would recommend waiting for Target to show it's making progress toward these two goals before jumping in. Target underestimated the challenges it would face in 2013, and it could be doing the same today.

Target's Q4 Could Be Even Uglier Than Warned
363%