Tesla Motors (TSLA -2.44%) officially announced plans for its $4 billion-$5 billion Gigafactory to manufacture lithium-ion batteries for use in its all-electric cars. Tesla is directly investing $2 billion in the project, with the remaining cash coming from the EV maker's battery supply partners, including Panasonic. Tesla will fund its portion of the venture with cash from a $1.6 billion convertible bond. However, perhaps more interesting, is the fact that Tesla is considering Texas as one of four states now in the running for where the massive plant will be located. 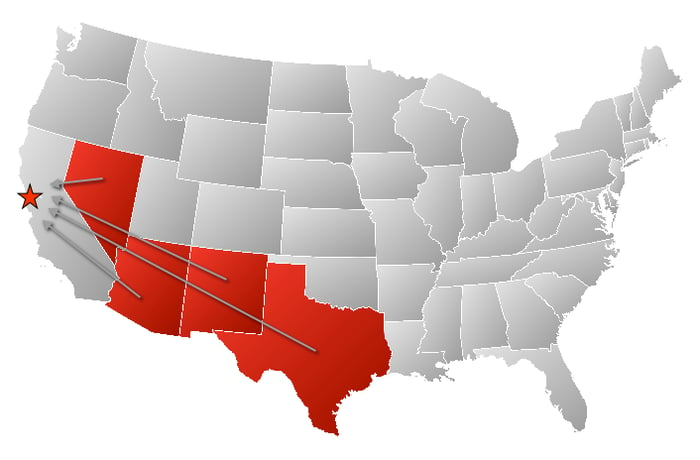 If Tesla were to build its Gigafactory in Texas, it would contribute billions of dollars and upwards of 6,500 manufacturing jobs to the Lone Star state. Importantly, this gives Tesla a serious advantage over the Texas Automobile Dealers Association, which, up to this point, has been successful in getting Texas lawmakers to ban the sale of Tesla cars in the state.

Giving Tesla the boot
Last year, Tesla lost a crucial fight with the Texas dealers group to sell its zero-emissions cars directly to Texans. Texas currently has strict regulations in place that forbid manufacturer-owned dealerships in the state. However, that could change now that Tesla's bringing a multibillion-dollar opportunity to the table. Perhaps the red star in Tesla's rendering above is a subtle jab at what the company really wants: Texas.

After all, being shut out of Texas is a major setback for the upstart auto company, particularly given the sheer size of the Texas market. Let's not forget that Texas is the second largest and second most populous state in the entire United States. On top of this, the Texas Auto Dealers Association spends millions of dollars each year lobbying for bogus laws that protect the big auto dealers from competition. This hardly seems fair, as this country was built on competition.

In fact, the Texas Auto Dealers group spent a whopping $2.5 million on legislative elections in Texas in 2012, according to a CNBC report. Not to mention, franchised dealerships generate significant amounts of sales tax for the various counties within Texas. Yet, instead of crying injustice in the corner, Tesla's visionary chief executive Elon Musk has come up with a better plan: Make Texas an offer it can't refuse.

Wake up, Texas! Tesla is an American company, creating American jobs -- and what's more American than Texas? The way I see it, this is a win-win for the state. Not only would the Gigafactory create more than 6,000 new jobs in the state, but allowing Tesla to sell its cars in Texas would mean Tesla investing "tens of millions of dollars" in the state to open new stores and service centers there.

Shares of Tesla are trading at record highs this week amid wild optimism over the company's plans for a Gigafactory. However, things could get even better for Tesla shareholders if the EV maker's ploy for Texas works in its favor.