Please ensure Javascript is enabled for purposes of website accessibility
Log In Help Join The Motley Fool
Free Article Join Over 1 Million Premium Members And Get More In-Depth Stock Guidance and Research
By Aimee Duffy - Feb 27, 2014 at 10:16AM

Anheuser-Busch InBev spends record $4.3 million lobbying in 2013, much of it geared toward a bill that will never pass.

News outlets have been quick to point out that lobbying in Washington has trended down in recent years. Someone forgot to clue in beer giant Anheuser-Busch InBev (BUD 0.39%) on that, however, as the beer behemoth is spending more money lobbying politicians than ever before, plunking down $4.3 million in 2013. In contrast, MillerCoors (the SABMiller and MolsonCoors joint venture) forked over $2 million, while Sam Adams manufacturer Boston Beer spent a measly $130,000 on lobbying in 2013.

Even stranger than the lobbying growth was the fact that A-B InBev had a laser-like focus on two bills that stand little chance of getting passed. Today, we're covering what investors need to know about Big Bud's activity in the nation's capital.

Die-hard beer enthusiasts know there are two significant pieces of beer legislation kicking around Washington right now: the Brewers Excise and Economic Relief Act of 2013 and the Small Brewer Reinvestment and Expanding Workforce Act of 2013. The former is known as the BEER Act and proposes reducing the per-barrel tax on beer from $18 to $9 and implementing a bigger reduction for small brewers that would virtually eliminate excise taxes on the first 15,000 barrels. The latter is known as the Small BREW Act and it proposes increasing the qualifying maximum barrel production from 2 million barrels annually to 6 million barrels, while reducing the excise tax by half on the first 60,000 barrels produced, and by $2 per barrel for the next 1.94 million barrels.

According to the website govtrack.us, the BEER Act and the Small BREW Act have approximately a 0% chance and a 2% chance, respectively, of being enacted by Congress. You would never guess those were the odds based on Anheuser-Busch's lobbying strategy. Have a look at the company's 2013 record, broken down by issue: 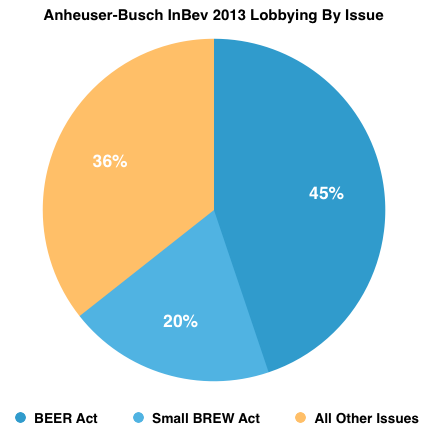 A whopping 65% of AB InBev's total lobbying activity by reports filed revolve around these two bills, which ultimately raises the question: Why on earth would a company spend the bulk of $4.3 million lobbying issues that will never come to pass?

In part, because if the BEER Act did come to pass, the return on that $4.3 million lobbying spend would be mind-boggling. According to its full-year results released on Wednesday, Anheuser-Busch produced roughly 104 million barrels of beer in North America last year. Even if you graciously grant Canada 25% of that volume, you're talking about paying well in excess of $1 billion a year in federal excise taxes at the current rate. If passed, the BEER Act would cut that number in half, resulting in hundreds of millions of dollars in savings, which, again, is a substantial return on a $4.3 million lobbying investment.

Bottom line
As wasteful as it seems to throw away millions of dollars on lobbying bills that will never come to fruition, it is not that much money in the grand scheme of the A-B InBev universe. After all, it is a massive global operation generating billions of dollars in revenue all over the world, meaning its relative success depends on a variety of factors. The willingness to spend more money than it ever has on lobbying may indicate desperation in the current U.S. market, but it alone does not intimate long-term failure.