Priceline, Las Vegas Sands, and Home Depot are trading near new highs for the year; however, it´s not too late to buy these stocks.

The market is on fire lately, and many investors are finding stocks too pricey at these levels. However, investing is about future return potential versus risk, not past performance. Companies like priceline.com (BKNG -0.70%), Las Vegas Sands (LVS -1.89%), and Home Depot (HD -0.82%) have plenty of room to run, even if they're trading near their highs of the year.

Priceline keeps gaining altitude
Priceline is the global leader in online travel services, an industry offering enormous potential for growth as travelers from all over the planet continue going online for bookings and reservations because of price convenience and personal comfort.

The company is truly firing on all cylinders, both from a financial and operational point of view: Gross bookings increased by 39% to $9.1 billion during the fourth quarter of 2013, and this translated into a sales increase of 29.4% to a record $1.5 billion during the period. In addition, Priceline continues building its worldwide supply, with more than 425,000 hotels and other accommodations in 195 countries, an increase of 54% versus 2012.

Margins tend to rise over time as the company spreads its fixed costs in a growing revenue base, so earnings are increasing even more rapidly than sales. Non-GAAP net income during the quarter came in at $8.85 per share, representing an increase of 30.7% versus the $6.77 per share the company earned in the fourth quarter of 2012.

After making new historical highs above $1,375 per share, Priceline trades at a forward P/E ratio of 21. This is an above-average valuation, but the company can certainly justify its valuation premium based on its extraordinary potential for growth in the long term.

Las Vegas Sands is a smart bet
Las Vegas Sands is having some troubles in Singapore, where revenues declined by 8% during the last quarter of 2013. However, the company's biggest market, Macau, is performing remarkably well, as Sands China delivered a 28% increase in sales to $2.53 billion during the period.

All in all, Las Vegas Sands reported a sales increase of 18.8% to $3.66 billion during the fourth quarter of 2013, and adjusted earnings per share jumped by 33.3% year over year, so investors have no reason to worry when it comes to growth and profitability at the company level.

Las Vegas Sands' position in Macau is a key strategic asset for the company. Macau is the only region in China where gambling is legalized, and it still offers enormous room to benefit from the rise of the Chinese middle class and increased discretionary spending for years to come.

Las Vegas Sands is trading near $85 per share, which is a multiyear high for the company. However, the stock pays a dividend yield of 2.4%, and it trades at a forward P/E ratio below 20, so valuation should be no impediment to investing in this profitable high-growth casino.

Home Depot is building growing dividends
Home Depot made new historical highs near $82.70 per share after reporting better than expected earnings on Wednesday.

Total comparable-store sales for fiscal 2013 grew 6.8%, and comparable sales in the U.S. increased at an even higher 7.5% during the year. This was the company's strongest performance in 14 years on the back of solid execution and favorable tailwinds from the housing market recovery.

With a total of 2,263 stores and annual sales above $78.8 billion, the company is the largest home-improvement retailer on the planet. This means economies of scale and brand value in a capital-intensive industry with significant barriers to entry.

Besides, judging by economic variables like housing starts, the industry should have plenty of room for recovery in the years ahead. 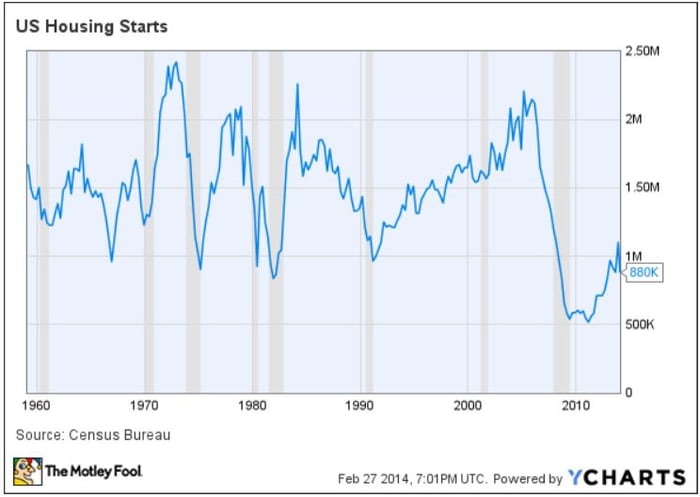 In a sign of confidence about the future, management has recently increased dividends by a whopping 21% to $0.47 per share. This brings the dividend yield to 2.3%, so Home Depot doesn't look overvalued at all considering the company's remarkable performance and leadership position in a promising business.

Bottom line
A rising stock price does not mean a stock is necessarily too expensive -- sometimes the fundamentals provide a fair justification for price increases. Priceline, Las Vegas Sands, and Home Depot have delivered big returns for investors lately, but that could be just the prologue for more gains in the years to come.