The economy didn't improve as much as expected, but there are explanations aplenty for the shortfall.

It wasn't that long ago that GDP was expected to rise by more than 3% in 2013's fourth quarter. What a difference a month (and some horrible weather) can make -- the Bureau of Economic Analysis just updated its estimate of U.S. GDP growth, knocking the number all the way down from 3.2% to 2.4%. The general consensus among GDP-watching economists was that GDP would be revised downward to 2.5% -- so why is the Dow Jones Industrial Average (^DJI 0.10%) rising quickly today? At the time of this writing, the index held a gain of 0.6%, but if its early momentum continues, the Dow could easily top a 1% rise by the end of the day.

There are a few reasons why the markets simply don't seem to care about this disappointing update. For one thing, annualized growth in personal consumption expenditures, a broad measure of consumer spending, was revised down to 2.6%, a higher rate than the anticipated 2.5%. This is still an improvement from the 2% increase in personal consumption expenditures seen in the third quarter, and except for the first quarter of 2012, it is the highest quarterly growth rate for personal consumption since the third quarter of 2010. Growth in business investment, measured as nonresidential fixed investment, also surged to 7.3% for the fourth quarter, a significant improvement over the earlier estimate of 3.8%, and exports increased by 9.4% while imports grew by only 1.5%. The growth in exports was at its highest level since the early recovery phase of 2010. 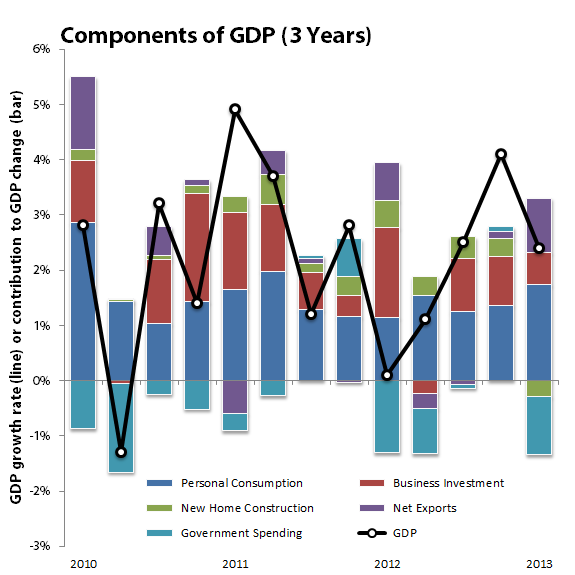 Government spending also plunged -- overall expenditures at all levels were 5.6% lower year over year, as state and local governments reduced spending by 0.5% while the federal government reduced its spending by 12.8%. As the private economy continues to improve, we're likely to see a resurgence in state-level spending as the tax take grows.

The price index, which measures changes in the prices of various GDP components, also grew at a higher than expected rate. For the fourth quarter, overall prices grew by 1.6%, which is a bit higher than the 1.3% estimated last month. This is not necessarily a bad thing, especially when inflation has been running extremely low, but the GDP price index is somewhat less relevant to economic analysts than the Consumer Price Index or other more frequently updated measures of inflation.

Two things stand out in this report that may hold clues to the future direction of the economy. After running at a high rate of growth for several years following a terrible recession-era plunge, new home construction (residential fixed investment) posted its first major decline since 2010. This could be at least partly weather-related, but it is a far more modest drop than that seen in 2010's third quarter, and one quarter doesn't make a trend. Government spending, which has been a drag on GDP for several years, is also in major decline after rising modestly in the third quarter. An uptick in one or both measures for the first quarter could have a major impact on the growth of the overall economy.

There is good news on the homebuilding front -- bank lending for construction projects ticked up slightly in the fourth quarter after bottoming out in the third quarter, and new home sales rose at the fastest rate since mid-2008 in January, indicating sufficient demand to spur further construction. The federal budget, on the other hand, is expected to rise by 2.5% for fiscal 2014, which might wind up being barely enough to keep pace with inflation.

These Are My 5 Highest-Conviction Stock Market Moves for 2023

Want a Stock With a Fortress-Like Balance Sheet? Look for This.
376%