Please ensure Javascript is enabled for purposes of website accessibility
Log In Help Join The Motley Fool
Free Article Join Over 1 Million Premium Members And Get More In-Depth Stock Guidance and Research
By Jake Mann - Feb 28, 2014 at 6:50AM

Jadeveon Clowney will most likely be a top five pick in this year's NFL draft, but how much money will he make?

Are you a member of Team Good Jadeveon or Team Bad Jadeveon? This month's NFL combine has shed light on one of the league's most controversial prospects: Jadeveon Clowney. As his all-universe highlight video shows, the defensive end can make plays never before seen on a football field. But a subpar final season in college has some wondering about his work ethic, and how much he's worth to an NFL team.

A top five pick
If media expectations are any indication, he'll be a top five pick in this year's draft. Although journalists are by no means perfect at predicting where rookies will land, Clowney's lightning quick combine times -- a 4.53 40-yard dash and 1.56 10-yard split -- have many analysts in awe (just look at Warren Sapp's reaction to his 40).

The Houston Texans, St. Louis Rams, Jacksonville Jaguars, Cleveland Browns, and Oakland Raiders are all in play, assuming he is taken in the draft's first five slots and there are no trades. Since the implementation of the NFL's rookie wage scale in 2011, five defensive players have been drafted in this subset, three of whom play on the line.

Including signing bonuses, these draftees are set to make an average of $19.7 million their first four years in the league, though none have gone No. 1 overall. If Clowney is taken first by the Texans -- something SBNation's Stephen White says they "need" to do -- he'll likely get a bump to about $22 million total.

A game-changer
The reason Clowney could be taken No. 1 is simple: he's a game-changer. As White writes, "this kid is friggin' amazing in space.... I'm not sure a left tackle or tight end successfully blocked him a single time in space in any of the games that I watched." In addition to a jump off the edge only a handful of NFL players currently possess (think Julius Peppers and Dwight Freeney) Clowney's open field abilities are simply unreal. Just look at the pursuit speed.

According to a report sent to me from STATS, Clowney was significantly better at pressuring the quarterback than any other top D-line prospect who played between 200 and 250 passing snaps last year. He generated almost the same number of pressures as most peers who received nearly 100 more shots at the QB. 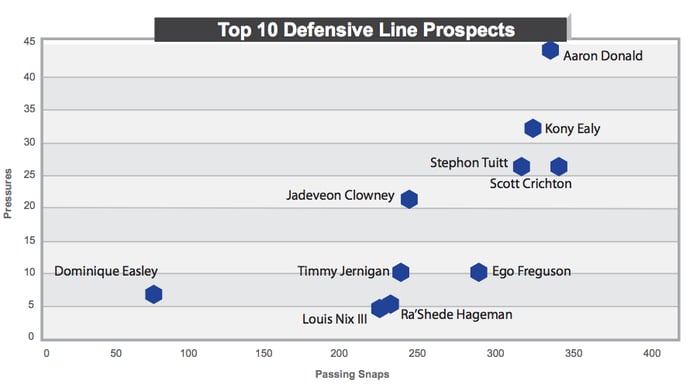 When a truly once-in-a-generation skill set comes around, teams don't let it fall in the draft. Andrew Luck, in 2012, and Cam Newton, a year earlier, are a couple examples of bona fide No. 1 picks that had few -- if any critics -- of their lofty draft spots. Clowney is the rare defensive talent that deserves this status, so why would the Texans pass on him?

A risk
Unlike Luck, Newton, or most other NFL draft picks who have clearly had the most potential of their peers, Clowney comes with a major risk: questionable work ethic. Warren Sapp, despite being amazed by Clowney's physical abilities, told NFL Network that after watching the bulk of his college career, "you don't see that love for the game."

Although he set South Carolina's single season record for sacks (13) and tackles for loss (23.5) in 2012, Clowney recorded just three sacks last year and missed two games. After sitting out of a contest in October, his head coach, Steve Spurrier, told ESPN, "if he [Clowney] doesn't want to play, he doesn't have to play," before later reversing course.

A look ahead
Regardless of exactly how early he goes in the first round, a reasonable estimate for Clowney's salary lies somewhere between $19 million and $22 million over four years, with the majority of that money in the form of a signing bonus. While he certainly wants to be the No. 1 pick, a worst-case scenario will likely cost him no more than 10% of his multi-million dollar deal.

Personally, I'm a member of Team Good Jadeveon because the plays he's made on the football field are some I've never seen before. Quarterbacks like Manziel and Bridgewater exist in the NFL, but a defensive end that's the fastest player on his team does not. The sheer potential that Clowney can become a Freeney-Peppers hybrid with the feet of Chris Johnson, in my opinion, is simply too good to pass up. Regardless of what the Texans do, though, one thing is certain: Clowney is set for a mammoth payday in just a few short months.