Americans love to spend money on outdoor recreation in two forms: the purchase of gear and vehicles for outdoor recreation, and on trips and travel. For every dollar spent on gear and vehicles, an estimated $4 is spent on trips and travel. The outdoor-recreation industry has the distinction of expanding even during the recession, notching about 5% annual growth during the period between 2005 and 2011. This industry in the U.S. is generating around $646 billion in yearly sales and 6.1 million direct jobs.

Considering the industry's size and growth, it is a good idea to examine Dick's Sporting Goods (NYSE:DKS), a prominent player in the outdoor sporting-goods segment, and see how it stacks up against peers like Cabela's (NYSE:CAB) and Big 5 Sporting Goods (NASDAQ:BGFV).

Dick's is outperforming others

A look at revenue growth over the past five years, as shown in the chart below, clearly establishes Dick's as the leader of the pack, closely followed by Cabela's; Big 5 trails the others by a wide margin. 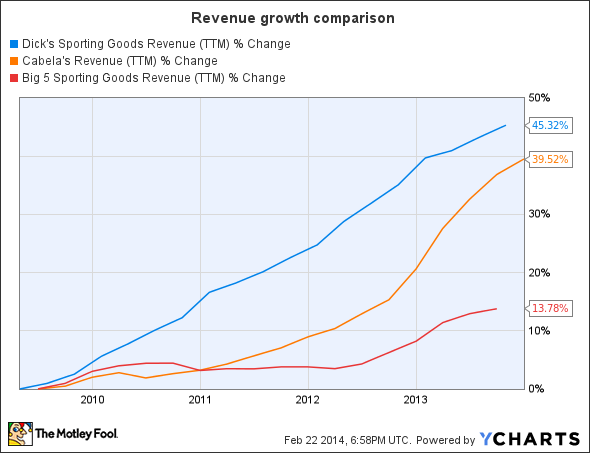 In the third quarter of fiscal 2013, Dick's reported strong performance in the athletic footwear and apparel and team-sports segments. This fueled comparable-store sales growth of 3.3%, on top of a 5.1% jump during the year-ago quarter, despite softness in the fitness and outdoor-apparel categories. On the back of positive comps and new store openings, revenue jumped 6.7% year over year.

Looking ahead
In 2014, Dick's is planning to reallocate square footage to higher-growth categories including youth and women's apparel. However, during the fourth quarter, the company still expects cautious consumer spending.

Retailers are quick to blame bad weather and weak consumer spending, and Dick's is no exception. It squarely blamed both for its bad second-quarter performance. The weather was particularly horrible toward year-end, and this could be a spoiler for the fourth quarter. Although Dick's witnessed good indicators for cold-weather outerwear during the third quarter, I think much of the optimism for the fourth quarter could be tempered as a result of inclement weather. If this happens, then this could be a buying opportunity as the stock declines.

Dick's digital initiatives, including the e-commerce channel, could come to its rescue. In the third quarter, they accounted for 6.5% of revenue. The e-commerce channel has the advantage of round the clock access and ordering, even if the bad weather prevents consumers from going out and shopping. Dick's is increasing product offerings at various price points in the ship-from-store channel to bolster its e-commerce segment.

Peers' moves
Cabela's did not blame the not-so-great weather when it posted its fourth-quarter results this month. However, declining sales of firearms and ammunition continued. As a result, consolidated comps declined 10.1% year over year. Excluding firearms and ammunition sales, comps were down 3.5% versus the year-ago quarter.

Going forward, Cabela's expects sales to shift away from firearms and ammunition and into higher-margin categories like hunting apparel, footwear, men's casual apparel, and non-shooting hunting equipment. Also, its new format stores are outperforming the legacy store base by more than 50% in sales per square foot and more than 60% in profit per square foot. This reinforces the retail growth strategy of the company, and the new format stores will be a game changer going forward.

Big 5 Sporting Goods' growth story is centered on a three-pronged strategy: e-commerce, new store openings, and increasing store efficiency. Expenses for its new e-commerce platform will have an earnings-per-share impact of $0.01 in the fourth quarter of fiscal 2013. The platform is expected to roll out in fiscal 2014. This will allow direct-to-consumer purchases, leveraging the company's new distribution center.

As a result of the new e-commerce platform rollout in 2014, Big 5 can address a larger market than its current store-based presence that's limited primarily to the western region. In addition, this may also allow it to expand its stores in other geographical regions as the brand gains traction in areas where it has no presence.

Bottom line
All three companies are focused on online sales for growth, but in my opinion Dick's looks to be in a solid position. Apart from the e-commerce initiative, the company is focused on pushing its higher-selling products that should result in higher sales. Also, with a P/E ratio of just below 20, Dick's isn't very expensive, and a forward P/E ratio of 16.7 means that there is bottom-line growth expected in the future.