Since its public debut in October, Potbelly (NASDAQ:PBPB) has lost more than one-third of its share price and is now trading near 52-week lows. Fourth-quarter 2013 earnings results and a near-term outlook by the company further pressured the stock.

Many in the restaurant industry are blaming bad winter weather for sluggish sales. Fast-casual competitor Panera Bread (NASDAQ:PNRA) and even fast-food giant McDonald's (NYSE:MCD) have cited Mother Nature as a main culprit for recent slow sales. Given the perception that Potbelly should be growing much faster than either Panera Bread or McDonald's, should shareholders have more patience with Potbelly?

Potbelly's earnings and near-term outlook
Potbelly's fourth-quarter total revenue increased 1.7% to $74.8 million.. Despite an additional operating week compared to the same period in 2012, earnings still fell short of expectations of $76 million. For the year, revenue rose 9% to nearly $300 million.

Another major disappointment for shareholders was the 0.7% comp-sales growth for the quarter, while comp sales for the entire year inched up just 1.5%.

During the conference call, Potbelly execs cited the weather and government shutdown as reasons for the results. However, the company has plans in 2014 to create another hub market similar to the success its had in Chicago and the Washington, D.C. area.

Reasons to be patient with Potbelly
Even with 319 locations, Potbelly is only in 21 states, and its international presence is solely the Middle East. Potbelly has traditionally expanded in slow but calculated steps around successful hub cities. There is a good chance that Potbelly hasn't peaked yet, as it still hasn't touched prime real estate locations like California or Florida. By comparison, there are more than 10 Subway restaurants within a one mile radius around Los Angeles.

Potbelly's comp sales are often compared to other high-growth companies within the restaurant industry. Panera Bread's recent fourth quarter produced comp sales growth of 1.7%,  while the growth leader in fast casual, Chipotle Mexican Grill, had a surge in fourth quarter comp sales of 9.3%. Instead, Potbelly should be compared to Potbelly. While its 1.5% full-year 2013 comp sales growth might look small, it is still positive growth. Furthermore, the company's recent track record has never shown comp sales growth above 7%, and many quarters since 2010 have hovered around 2% growth. Additionally, Potbelly is consistent, as the company has only experienced one negative quarter of comp sales growth in the last 15 quarters.

Potbelly's plans to grow a new hub market in 2014 should excite shareholders. Finding a successful hub market in which to expand would not just benefit 2014 earnings but 2015 and beyond, as it is likely that the company will grow from that hub market. Additionally, Potbelly has historically taken 18-24 months between hub-market expansions.

Potbelly's disadvantages
One of the biggest roadblocks for Potbelly's expansion is the expensive franchising costs. Relative to Subway's initial investment costs of $116,000 to $263,000, for instance, Potbelly's initial investment costs are much higher at $462,000 to $768,000. However, this can be a positive since anyone who decides to go forward and become a Potbelly franchisee will be that much more invested in the company and have a larger incentive to run their particular location successfully.

The perception that Potbelly is a lunch-only establishment is another issue. A recent study revealed that restaurant breakfast sales were estimated to have reached more than $47 billion in 2013, while they are expected to rise another 5% in 2014. Even though Potbelly serves breakfast, it doesn't have the menu variety or restaurant capability to serve the meal as well as Panera Bread or McDonald's.

Likewise, the lack of drive-thru's at the majority of Potbelly locations puts the company at a disadvantage during the morning hours when people are rushing to work. Fast-food breakfast options like McDonald's, Dunkin' Brands, and Burger King all have a leg up on Potbelly in this time slot.

2013 research showed that fast-casual checks on average were $7.40. In contrast, fast-food checks at places like McDonald's and full-service restaurant checks averaged $5.30 and $13.66, respectively. Despite Potbelly prices fitting the mold of fast-casual chains, menu items are often compared to fast-food choices like Subway, Jimmy John's, Firehouse Subs, and countless other sandwich shops.

This borderline of being either a fast-casual or a fast-food chain among casual consumers puts Potbelly at a major disadvantage when it comes to dinner hours. 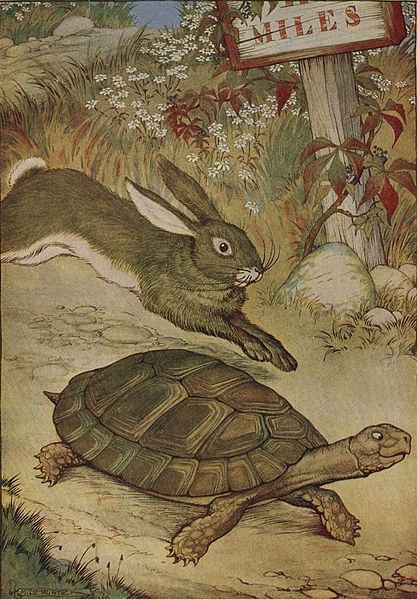 Could Potbelly be the tortoise?

Bottom Line
"The Tortoise and the Hare" is a famous children's story showing how slow and steady wins the race. Potbelly could be today's tortoise. It has several trends going for it. Last year's study showed that fast-casual visits rose 8%, while there was no growth among the rest of the industry. Additionally, another study revealed that 43% of consumers now eat at least four sandwiches per week, up from 39% in 2010.

However, the curse of competition may continue to haunt Potbelly for some time since the $20 billion sandwich and sub industry is highly fragmented with nearly 25,000 businesses.