Fortune magazine recently released a excerpt of Warren Buffett's 2014 annual letter: "What you can learn from my real estate investments." He discusses a 400-acre farm that he bought in 1986 for his son located in Nebraska and investing in a partnership which bought a multi-tenant building adjacent to New York University in 1993.

He has never visited that building and just recently visited the farm for the second time. Yet, these two long term real estate investments have proven to be extremely successful. Here are the three most important lessons to be learned from Buffett's story, as well as three great stocks to consider.

1. A margin of safety
In both cases, he purchased distressed properties that had been taken over by government regulators after an asset class bubble had burst. He bought each of the properties at a price where the unleveraged return was initially about 10%. These were individual assets -- not operating companies. Regarding investing in companies, Mr. Buffett has often been quoted, "I'd rather buy a good company at a fair price than buy a fair company at a good price." A strong balance sheet can help provide a margin of safety when it comes to investing in publicly traded companies. 2. Confidence in management
Mr. Buffett admittedly knew nothing about farming. He relied upon his son to give him accurate information about crop yield and the value of the commodities to confirm that the farm would initially be a wise investment. Likewise, an experienced New York landlord whom Mr. Buffett knew personally tipped him off to the retail property opportunity. An experienced real estate developer well known by Mr. Buffett analyzed the rent roll and was willing to invest his own money and become the managing partner.

Although Mr. Buffett was outside of his circle of competence, he had confidence in management -- and felt in both cases that their incentives were aligned with his own.

3. Assets positioned to perform well in the future
A well-known Buffett idiom is that his preferred holding time is forever. The retail property adjacent to NYU was a superb location with high barriers to entry. The analysis of the leases had revealed that although most existing tenants were paying $70 per square foot, the anchor tenant was only paying $5 per square foot! That lease encumbering 20% of the space was due to expire in nine years.

In the case of the farmland, Mr. Buffett felt confident about the prospects of growing corn in Nebraska, and that over time commodity prices will rise, which in turn would result in a higher valuation for the farm. In fact, earnings have tripled and today the farm is worth five times what he paid for it in 1986. 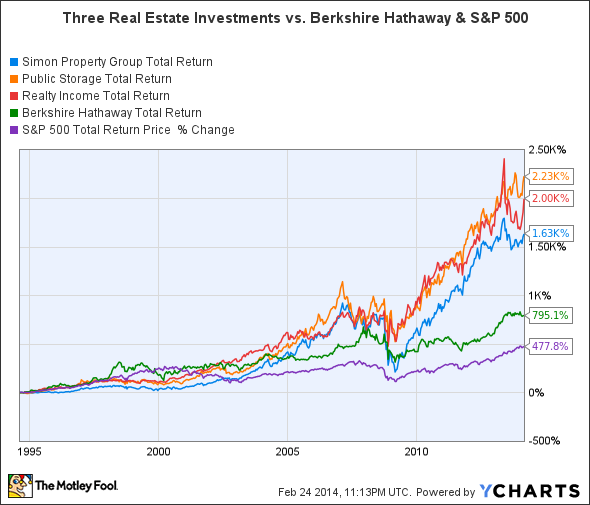 Common sense checklist
Margin of safety: Check. Yes, it would have been great to have timed the market perfectly and bought these stocks at 2009 prices -- including Berkshire Hathaway (NYSE:BRK.A) -- assuming you didn't already own it. However, margin of safety comes from strong investment grade balance sheets and a long history of paying out and raising dividends. Additionally all three of these REITs have profit margins in the neighborhood of 40%! Confidence in management: Check. All three of these companies have leadership teams that are experienced and deliver the promise. Board members and internal management incentives are aligned with common shareholders' interests.

Well-positioned properties: Check. Public Storage has record occupancy with a large percentage of its 2,200 U.S. properties located in urban areas. Simon's 325 U.S. properties are located in areas with strong demographics and are upgraded to improve sales per square foot on a regular basis. Realty Income owns almost 3,900 freestanding single-tenant properties, and only 70 were vacant as of Dec. 31, 2013.

The 20 year performance of these companies has crushed the S&P 500, but they even outperformed Berkshire.

Investor takeaway
Good things happen to good assets. Past results do not guarantee future performance, but these common sense real estate picks are built for the long term. All three of these REITs have recently reported strong earnings for 2013 and are well-positioned going forward.