Please ensure Javascript is enabled for purposes of website accessibility
Free Article Join Over 1 Million Premium Members And Get More In-Depth Stock Guidance and Research
By Michael Finarelli and Mark Reeth - Mar 2, 2014 at 10:30AM

Warren Buffett's recently reported move out of DISH Network may have some investors pondering the Oracle's view on the future of satellite television. Make no mistake, Berkshire Hathaway still holds a stake in rival DIRECTV; however, the shock waves from the surprise wedding proposal between Comcast and Time Warner Cable still has many investors reeling. Does the Oracle see trouble looming on the horizon?

You don't earn a nickname like "the Oracle" for nothing. So when Warren Buffett takes action, investors tend to take notice. Recently Berkshire Hathaway decided to sell out of the holding company's stake in DISH Network ( DISH 0.13% ) after only two quarters, a holding period that is highly uncharacteristic of the man who's been know to hold some of his favorite brands seemingly for life.  So what is it that the Oracle sees?

Buffett, the trader?!
Berkshire reported its purchase of about 547,000 shares of DISH back in the second quarter of 2013, right around the time they dumped their stake in Gannett Company. Back around this time shares were trading in the neighborhood of 15 times annual free cash flow, typically a better measure of value that sidesteps potential distortions in the reported bottom line. Fast-forward to today, when shares are approaching nearly twice that level. While we don't know exactly what Buffett earned, we have a glimpse at what his return could've been given DISH's performance over the time frame. 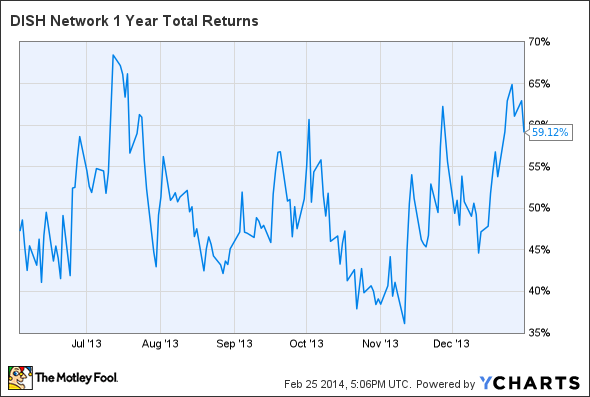 It's certainly been one wild and potentially lucrative ride for Buffett. Just one thing, though: The short span for such a proponent of long-term investing raises the question: Why the quick change of heart?

The cable industry interrupts this broadcast
Satellite TV companies, like DISH and DIRECTV ( DTV.DL ), have carved successful businesses out of their niche, amassing subscribers and, somewhere around the mid 2000s, generating respectable, if not value-adding, returns on capital. But now both companies find themselves facing increasing competition not only from each other, but also from the traditional telecoms and the increasingly more powerful cable companies. The recent deal between Comcast ( CMCSA 0.54% ) and Time Warner Cable (NYSE: TWC) alone would create a behemoth capable of providing television, Internet, and voice services to more than half the nation's population.

The combined entity's 30 million-plus subscribers would give the merged company greater reach to offer its more lucrative Xfinity triple-play package, not to mention the added clout in negotiating affiliate fees with content creators. Comcast shareholders must be happy, but where does this leave DISH?

A bold new world
DISH's lack of a viable Internet offering has helped impede its growth lately. To be sure, the company does offer dishNET at what appear to be competitive price points relative to other satellite Internet offerings. Although available, satellite Internet service, such as DishNET, faces data caps that make, say, streaming the latest episode of House of Cards or assuming "point" to lead your squad into battle in Call of Duty a little, shall we say, problematic. The truth is, America is increasingly using broadband to consume entertainment in ways that mean traditional, stand-alone television just can't compete.

Need more proof? Look no further than the changes made by Nielsen, the long-tenured media industry powerhouse that measures ratings and determines advertising rates for a market ranging in the tens of billions of dollars annually. Back in the fall, Nielsen announced its plans for a unified measurement approach that'll consider content viewed across "screens" and devices. So when you indulge in Frank Underwood's plot for revenge on those who betrayed him, Nielsen will be there but DISH won't.

Making moves for the future
With only 8,000 new customer additions, DISH has had trouble wooing subscribers. Perhaps it's with this in mind the company has been aggressively pursuing wireless spectrum. Why invest money in a maturing industry when you can't out-muscle cable? There's only one problem: buying hordes of spectrum alone won't guarantee success. Industry pundits from all corners seem to agree that the company will need help, but with no signs beyond outright speculation as to a potential partner, or favorable terms, for that matter, uncertainty abounds. Thirty-two times trailing earnings seems to be a pretty rich price tag for such uncertainty. Perhaps this has a little something to do with Buffett's decision.