The promise of potential always sets our imaginations wild: People who buy lottery tickets picture the things they would buy before they've even won the prize; investors in high-flying tech stocks think of their next great move before the ones they've made have generated a return.

We're all guilty of this, and it looks as though Israel is getting caught up in the hype of its own energy boom as well. In a recent article in Commentary, the author explains how Israel is on the verge of being the next great superpower in energy. When you look deeper into the details, though, this looks more like the dreams of potential that what might actually come to pass. Let's look at these ambitious claims and why they probably won't come to be.

The next Saudi Arabia?
For decades, almost all of Israel's energy -- coal and oil -- has been imported, which is a difficult situation to be in, considering that Israel doesn't exactly see eye to eye with many of its neighbors in the Middle East and North Africa, which also happen to be some of the world's largest oil exporters.

Well, those days are over, because Israel has found more than 250 billion barrels of oil, which would be enough to put Israel in the top three in global oil reserves.

Or at least that's the hope the Commentary article portrays.

But there's a reason this massive oil potential has yet to be tapped. It's not a conventional reservoir. Heck, its not even a tight oil reservoir. The oil that can be found under the sands of Israels Negev region is called oil shale, or kerogen -- we'll call it kerogen so we don't get it confused with shale oil, the resource that's taking america by storm. Kerogen is an immature form of hyrdocarbon that hasn't yet had the geologic factors such as pressure and temperature to create crude. Instead, the oil is locked in the pores of the rock itself, and it's extremely expensive to turn it into a finished product.

Royal Dutch Shell (NYSE:RDS.A) (NYSE:RDS.B) has for years been testing methods to extract oil from kerogen. A majority of that work has taken place in the United States, which itself has trillions of barrels of oil locked in keorgen deposits. However, the technology for this process has not proved economically viable, and despite the claims in the article that kerogen can be produced at a breakeven price, in reality it would take oil prices well above what they are today. Otherwise the U.S. would have found a way to produce kerogen decades ago, when it started testing extraction methods. Were still a long way off. The U.S. Energy Information Administration's best projections for economic kerogen extraction are for well past 2035.

So, sure, there may be a large deposit of kerogen in Israel, but that doesn't mean Israel is about to become a major oil producer on the level of Saudi Arabia.

The LNG supplier to the world?
Israel's kerogen deposits are a much more speculative play, but a consortium of offshore drillers led by Noble Energy (NASDAQ:NBL) has tapped some major natural gas fields that equate to about 3.5 trillion cubic feet of reserves. The article says this is about half of the United States' total reserves, but that's just slightly off. It's atually closer to about 1% of America's total natural gas reserves, according to BP's statistical review of world energy.

Still, 3.5 tcf is enough gas to supply Israel for several decades, with enough left over to export. Even better, Noble estimates that the costs for LNG from Israel or Cyprus to the Far East are well under comparable facilities in the U.S. and Australia. 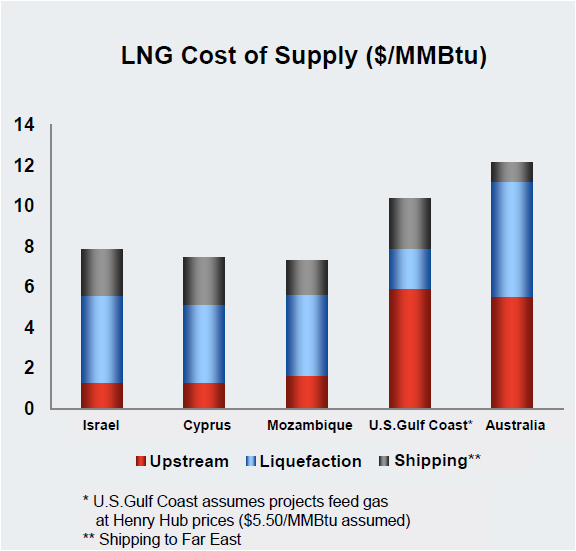 The reality of the situation, though, could make it much more challenging than how it appears on paper. LNG export facilities aren't exactly known for being cheap. One of the least costly options would be to employ a floating LNG vessel much like the one Shell plans to use off the coast of Australia, a project that will cost $12 billion. This could make it extremely challenging for a company like Noble, which doesn't exactly have the financial footing to cover that kind of project. To complicate things even further, exporting natural gas has caused Israel to step on a hornet's nest of geopolitics that has Russia and all of OPEC looking to subdue it.

For all this commotion, this must be a massive facility that will completely change the supply and demand dynamic for natural gas, right? Not really. The proposed 3.4 million-ton-per-year facility would represent just over 1% of the world's current LNG trade, and that doesn't count the nearly 100 million tons per year that ExxonMobil (NYSE:XOM) and Chevon (NYSE:CVX) combined plan to bring on in the next 10 years.

Replacing coal and oil imports with domestic natural gas and exporting extra production will have a profound impact on the Israeli economy. Noble estimates that the fuel savings and additional tax revenue from the conversion should result in an additional $130 billion for the country over the life of the project. However, the nation will hardly ever become a global superpower in the LNG trade.

What a Fool believes
The discovery of natural gas off Israel and the potential of its kerogen deposits can give a sense a promise to the once energy-starved nation. However, don't let the potential of these energy sources distract from the reality of the situation. This is a trap that investors fall for all the time, and it could even lead countries like Israel to make overly ambitious plans for the not-yet-collected revenue from these new energy sources. There are still many moving parts that are involved in the development in the Israel gas fields, and investors and other stakeholders should exercise some patience before making any hasty decisions.