Who are the biggest carbon culprits in the nation?

In Texas, everything is bigger -- including pollution. New data released this week points to the most polluting states around, and you might be surprised by the top contenders.

Patriotic pollution?
The U.S. Energy Information Administration released its latest state-specific data on carbon dioxide emissions, and emissions are down nationwide. In 2011 (most recent data), U.S. emissions clocked in at 5,384 million metric tons, down 3% from the previous year, and 10% from 2007's record high. 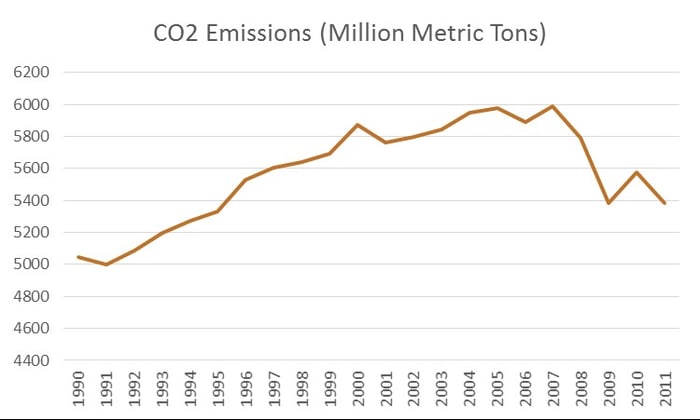 But those numbers aren't representative of our nation's notion to go green. Instead, they're a coinciding sign of a shrinking economy. A chart of U.S. GDP growth shows how much emissions and money-making coincide. In down years for CO2 emissions, GDP growth slid into the red: 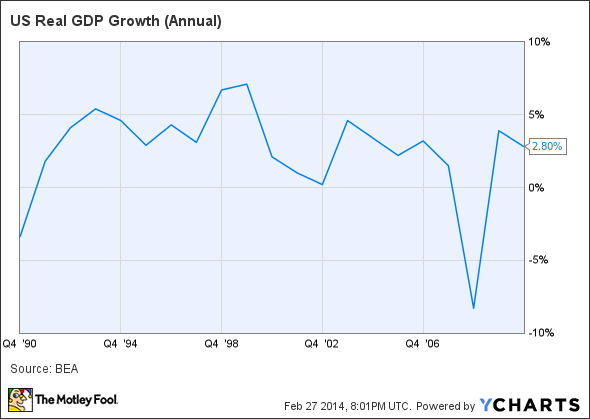 But while CO2 emissions have recently headed lower, some states are coughing out more carbon dioxide than others. Here are the top three carbon dioxide-emitting states, as measured by fossil fuel consumption.

The Lonestar State pushed out a whopping 656 million metric tons of CO2 in 2011 -- almost twice that of its closest competitor.

Taking a closer look at the data, it's not hard to see why. The main fossil fuel consumer is transportation, with petroleum products accounting for 184 million metric tons alone. That's more than New York state's total emissions.

The state also relies on coal to power much of its electricity sector. One of the biggest carbon culprits around, coal added on 159 million metric tons to Texas' books.

Sunny California has a dark side. Despite its position as the biggest solar state around, the Sunshine State can't quit its carbon habit. In 2011, California pumped out 346 million metric tons of CO2. And it's easy to understand why.

With 38 million Californians cramming in, this state has the largest population and largest economy of any in our nation.

California's electricity generation portfolio lets it get away with just 1.9 million metric tons from coal, but transportation once again proves to be this state's Achilles' heel. California residents and businesses clocked in a whopping 198 million metric tons to get from point A to point B.

3. Pennsylvania
While Texas and California are emissions heavyweights, Pennsylvania's 235 million metric tons are nothing to laugh at. While some refer to Pennsylvania as the Keystone State, its alternative nickname of Coal State may be more accurate.

Just like Texas, carbon dioxide emissions from coal-fired power plants play a disproportionately large role in this state's polluting status. At 97.1 million metric tons, generation emissions from coal are around one-third higher than those of Pennsylvania's entire transportation sector.

At the epicenter of the Marcellus Shale, natural gas emissions also contributed to or decreased this state's emissions, depending on how you look at it. Natural gas was the biggest emissions contributor for the state's residential and commercial sectors, and it came in just behind coal for industrial use. But since natural gas emits just 117 pounds of CO2 compared to coal's approximate 215 pounds, Texas and California could probably use some natural gas of their own.

Cleaning up?
Texas, California, and Pennsylvania may be the biggest carbon emitters around, but their excess isn't always their own. The products of these states' economies move around our nation and world, making it difficult to point the finger at even the federal level. But as carbon emissions continue to become a growing concern, we should hope each state does its part to go green.