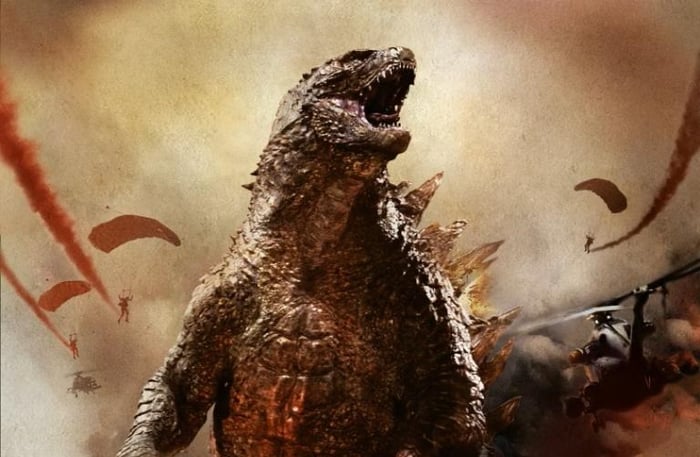 When Legendary Pictures announced it had acquired movie rights to Godzilla from Toho Studios in 2010, its CEO insisted, "Our plans are to produce the Godzilla that we, as fans, would like to see."

Legendary then promptly formed a partnership with Time Warner (NYSE:TWX) to co-produce and co-finance the reboot, which was tentatively slated for a 2012 release. Now, and though it's taken a bit longer to come to fruition, die-hard kaiju fans are eagerly counting down the days until the new Godzilla's May 16 debut.

It's evident the demand for a Godzilla worthy of Toho's original is there: Since the official main trailer was posted Tuesday, it has already racked up more than 15 million views on YouTube.

But is this really the Godzilla we've all been waiting for?

I think so, and here are three big reasons why:

Consider the source
First, look to the humility of Godzilla's 38-year-old director Gareth Edwards, who remained relatively unknown in the industry until he won a slew of awards with his first film in 2010 -- a low-budget, high-quality title called Monsters.

Even now, Edwards admits, "had you told me back then that this would be my next movie, I would have never, ever have believed it."

However, as a self-professed lifelong fan of the 1954 original, Edwards also insists his version will stay as true as possible to Toho's creation. At the same time, he says, his team will keep the project grounded and realistic (well, as much as a 35-story-tall monster can be), while avoiding the common pitfalls of today's big budget remakes. And yes, that's a not so subtle dig at Sony (NYSE:SONY) Pictures' critically panned, cliche-filled reboot in 1998.

And it's been that way from the beginning: Producer Brian Rogers echoed the same sentiment almost three years ago, saying Legendary Films "wanted to go back to the history of the project, but again because it's a reboot, bring it into the 21st century and do a project that was current and exciting to the audience.... Similar to what Legendary did with Batman."

That's not to say Sony's version didn't pique the interest of audiences. To the contrary, it grossed $379 million at the box office worldwide, including $136.3 million in the U.S. But despite its enormous $130 million budget, that was still only good enough to make it the third-highest grossing film worldwide that year, and the ninth-biggest movie in the U.S. Only Armageddon cost more at $140 million, but it also grossed an extra $65 million domestically and ended 1998 as the world's highest grossing film.

The stakes are even higher now given Time Warner and Legendary's estimated $160 million budget, but building it as a labor of love should make a world of difference.

Multiple monsters
Next, Edwards has confirmed his Godzilla will have other beasts to battle, addressing a huge complaint fans maintained with Sony's solo stomping effort.

This in mind, Godzilla's new nemeses won't be based on any existing kaiju (sorry Rodan and Mothra fans). From brief glimpses we get in the trailer, we can see they can apparently walk, swim, and fly:

Trying to design a new creature that feels like something you've not seen yet and looks good is a really hard task. We went for a combo of all our favorite monsters from every movie. Part shark, part Alien Queen, part Starship Troopers, part gorilla … they're kind of an amalgam.

Color me confused, but I suppose Godzilla's official plot description does shed light on the fact these creatures aren't exactly natural:

An epic rebirth to Toho's iconic Godzilla, this spectacular adventure ... pits the world's most famous monster against malevolent creatures who, bolstered by humanity's scientific arrogance, threaten our very existence.

That chilling roar
It might be tempting to think "It's just a roar," but many Godzilla fans have been known to dissect and memorize the nuances of each film's sound. It's unsurprising, then, that one of the three videos in the official Godzilla YouTube feed is an 11-second clip simply titled "ROAR."

When Edwards made Monsters a few years ago, he was working with a shoestring $500,000 production budget.  With the new Godzilla, however, he had access to millions of dollars and some of the best minds in the industry.

That includes renowned sound designer -- and new Godzilla roar creator -- Erik Aadahl who, in Edwards' words, helped him "embrace the classic roar but upgrade it." They even had Toho send over the only original recording, which helped them reinvent it with the necessary sense of realism afforded in today's cinemas.

The end result -- not unlike what I suspect the movie as a whole will achieve -- is a bone-chilling effect both newcomers and longtime fans of the cult classic will appreciate.