The first two months of 2014 haven't been as kind to Ford (NYSE:F) as investors would have liked, at least when looking at sales figures. The Blue Oval reported a 7% decline in year-over-year sales for January and followed that with a 6% sales decline in February. Still, there were a couple of bright spots in Ford's sales figures. Here are the details and a suggestion of what to watch for as spring inches closer.

By the numbers
Ford's total sales checked in at 183,947 units in February. Retail sales topped 125,000 units for the month, which was a 4% decline from February 2013. One reason for the overall 6% decline was that Ford was forced to push back about 10,000 fleet sales from February into March. That will give this month's sales report a little boost at the expense of February's numbers.

Ford also believes the harsh winter in the U.S. softened sales, but that demand increased strongly in the last week. Demand also remained strong in the West, which was affected less by the winter weather.

Lincoln's revival
Ford recently has focused more of its energy and resources into turning around its luxury Lincoln brand. While management has much work left to do, and the turnaround remains in the early stages, the latest sales numbers show a definite improvement this year. Overall Lincoln sales were up 36% in February, and are up nearly 40% year to date, led by strong sales performances from the Lincoln MKZ and MKX. 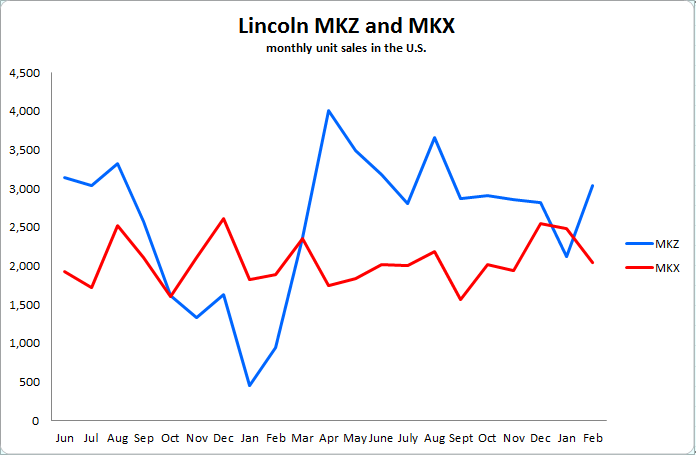 Sales of the MKZ were up a staggering 222% compared to last year, although that's more than explained by the model's botched January 2013 launch. Dealers had to wait months to get needed MKZ inventory which, as you can see above, sent sales plunging. Now that the pent-up demand has been worked through look for sales of the MKZ to stabilize and remain strong heading into the spring selling months. That will keep overall sales of the Lincoln lineup strong until the MKC hits dealerships, which should take the brand's sales to another level.

Ford trimmed many brands as it exited the recession, leaving only Ford and Lincoln. That means the company is serious about turning the luxury lineup around, and it desperately needs to do so as the sales represent higher transaction prices and profit margin.

F-Series hauls profits
Sales of the F-Series, Ford's most profitable vehicles, were another bright spot in February's figures. F-Series sales checked in at 55,882 last month, which was good enough to become Ford's best February result in the last eight years. While sales of the F-Series only increased 2.6% over last year's results, it continues to post positive results while its crosstown rival struggles.

Sales of General Motors' (NYSE:GM) Silverado declined 12% in February and remain 15% lower for 2014. The automaker's redesigned Sierra is also down 6% for the year. GM is obviously disappointed in the results of its newly designed trucks and is planning to boost March incentives significantly in an effort to regain market share. Chevrolet is running a national promotion this month in which it is offering supplier pricing on all Silverado pickup models. This will be the steepest incentive program so far for the Silverado trucks, and GM hopes to take advantage of a March that has five weekends on the calendar.

Looking ahead
Full-size pickups remain the industry's most profitable segment and represent the fastest way to gain or lose market share and profits. Investors would be wise to watch March sales and see if increased incentives send GM's truck sales surging at the expense of Ford and Chrysler. It would also be wise to watch how Ford responds. So far the company has stuck to its guns and kept incentives close to historical norm, about $4,000 per truck. If that remains the case, the company will be more profitable come the first-quarter-earnings report. If Ford doesn't lose market share in the process, it'll be an even bigger victory as the launch of its all-new 2015 F-150 nears.