After reporting earnings for the fourth quarter of its 2013 fiscal year on Feb. 25, shares of Macy's (NYSE:M), one of the nation's largest retailers, rose 6% to close at $56.25. For the year, shares of the company have risen more than 5%; this has brought the business's share price appreciation to 49% from where it stood a year ago. Given this meteoric rise, is now a prime opportunity to take some cash, or does Macy's still have some room to run?

Results were mixed but good!
For the quarter, Macy's reported revenue of $9.2 billion. This represents a 1.6% drop compared to the $9.35 billion that management reported a year earlier and fell just shy of the $9.27 billion that analysts expected. Although there is no excuse for failing to live up to Mr. Market's expectations, comparing its sales this quarter to the fourth quarter of 2012 is a bit unfair because of the extra week the company was able to book last year. Adjusting for this anomaly, Macy's actually saw its comparable-store sales rise 1.4% (2.3% if you account for its store-within-a-store operations.)

While the company fell short of what investors were hoping to see when it comes to revenue, it made up for that by reporting stronger-than-expected profits. For the quarter, management reported earnings per share of $2.16, 18% higher than the $1.83 earned the same quarter last year. This jump in profits was due, in part, to a 6% decline in the quantity of the company's shares outstanding, but was largely due to net income jumping 11% from $730 million to $811 million.

Macy's can move the market!
After seeing mixed results come from retailers like Dillard's (NYSE:DDS) and Nordstrom (NYSE:JWN), it looked like there was no upside in sight. That was, of course, until Macy's reported. Although Nordstrom reported earnings that topped analyst expectations by $0.03 at $1.37, the company's profitability slid from the $1.40 it reported the same quarter a year earlier. However, if you exclude the impact of the extra week the business enjoyed during 2012, its earnings per share would have come in at $1.36.

Despite enjoying a 0.4% rise in sales (5% after adjusting for the higher sales generated from the company's extra week of operations a year earlier) from $3.7 billion to $3.71 billion, Nordstrom was negatively affected by rising costs in relation to sales. The primary driver behind the company's decline in profitability was its cost of goods sold, which rose from 60.5% of sales to 61.1%.

While Nordstrom's performance during the quarter was mediocre, Dillard's was downright awful. For the quarter, Dillard's reported a 3.5% drop in revenue. After adjusting for its extra week during 2013, the business's rise in merchandise sales only amounted to 1%, whereas its comparable store sales rose 2%. This doesn't appear terrible at first glance, but when you look at its bottom line, the picture is anything but decent.

In terms of profitability, Dillard's saw earnings per share come in at $2.71. This represents a 19% decline from the $3.36 the company reported the same quarter a year earlier and is largely attributable to a rise in its cost of goods sold. At 67.4% of sales, the company's cost of goods sold stands considerably higher than the 65.6% of sales it amounted to a year earlier. Even after factoring in certain adjustments, the company's earnings fell 6% from $2.87 to $2.69, greatly missing the $3.00 that Mr. Market anticipated. 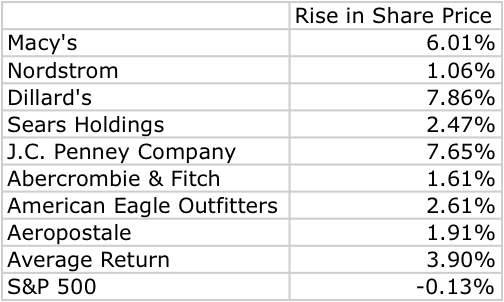 In light of these shortfalls, the strong performance reported by Macy's brought about strong gains in the retail sector. In response to the news, shares of Nordstrom rose 1% while Dillard's jumped nearly 8%. Even Sears Holdings and J.C. Penney, two struggling retailers, saw their shares climb 2.5% and 7.7%, respectively, after Macy's reported.

Foolish takeaway
Based on the performance seen by Macy's this past quarter, it's difficult to argue that the company is a bad investment prospect. Yes, the business is more expensive than some of its peers, but it has demonstrated time and again that it grants shareholders better financial performance and greater stability. Furthermore, it appears that when Macy's comes out and talks retail, the shares of its peers react just as Mr. Market does when Warren Buffett comes on the air. Moving forward, it's impossible to know which retailer will return the greatest value to shareholders, but Macy's looks like one of the best options.