Please ensure Javascript is enabled for purposes of website accessibility
Free Article Join Over 1 Million Premium Members And Get More In-Depth Stock Guidance and Research
By Pratik Thacker - Mar 3, 2014 at 11:53AM

Although consumer spending in the U.S. increased 0.4% for the month of December, the consumer sentiment index does not show the same trend. The index dropped to 81.2 for the month of January from 82.5 in December. Hence, consumer confidence has actually gone down, which is worrying for companies across the retail spectrum.

Toy maker Mattel ( MAT -2.42% ) also witnessed this weakness in consumer confidence when it posted its fourth-quarter results. The numbers were far below the Street's estimates, which led to a sharp fall in the stock price.

Mattel's disheartening numbers
Revenue stood at $2.1 billion, a plunge of 6.3% from last year's quarter. This was far below the estimate of $2.37 billion. Factors such as weather, which affected demand for outdoor games, and lower store traffic dented Mattel's sales. Moreover, there were fewer new toys released, especially ones which were based on children's movies.

According to the NPD Group, the sales of pre-school and infant toys have declined 4% and 6%, respectively, for 2013. One of the reasons for this decline was the growing popularity of interactive toys. In fact, the youth electronics category grew 18% as demand for tablets and other electronic devices increased. Hence, sales of Barbie dolls and other toys decreased.

Although Mattel's bottom line jumped 23% to $1.07 per share, this was far below the estimate of $1.19 per share. This was mainly because of Mattel's lower top line, which led to lower earnings. The toy maker's efforts were not up to the mark, which hampered its sales. First, the company made little effort toward product innovation, unlike the previous year when games such as Hot Wheels cars' new models (based on Angry Birds), and Fijit attracted more customers. Additionally, lower in-store promotional activities led to weak sales.

Mattel stacked against peers...
Although the company posted a lackluster quarter, it has significantly outpaced peers such as Hasbro ( HAS -0.30% ) and JAKKS Pacific ( JAKK -7.22% ) in terms of stock price appreciation. 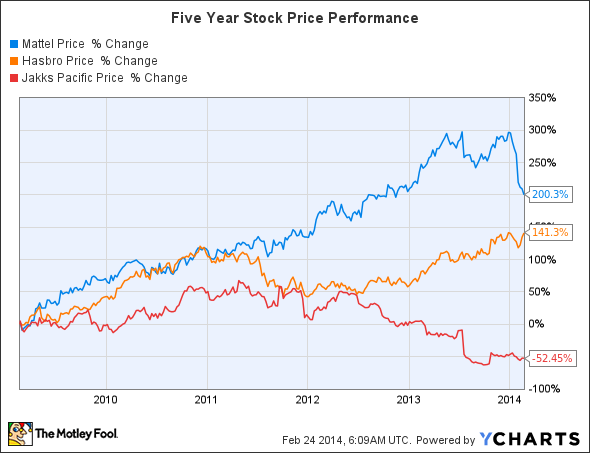 With a return of 200% to its investors, Mattel clearly outpaced the other two players, Hasbro and Jakks Pacific. With some of the leading toy brands such as Barbie and American Girl, Mattel has been able to lure customers. In fact, research results from NPD Group show that out of 50 top toys in the U.S, 12 were those of Mattel in 2013.

Mattel's peers are also trying to overcome competitive pressures by broadening their product portfolios and expanding their businesses. For example, JAKKS Pacific acquired Maui, an Ohio-based manufacturer of outdoor toys, in July 2012. The acquisition expanded JAKKS' portfolio of non-licensed products and diversified its distribution capabilities. Also, the company plans to expand the product line in the international market. The buyout of Maui came in addition to the company's acquisition of Moose Mountain Toymakers in October 2011. By acquiring the sports products manufacturer, JAKKS Pacific expanded its product mix, thereby allowing it to offer a wide variety of items to its customers.

Similarly, Hasbro is also gearing up with its recent acquisition of Backflip Studios. Backflip, the developer of some of the most popular mobile games for Android devices, will enhance Hasbro's digital gaming expertise. With the growing importance of mobile gaming, this acquisition definitely looks like a smart move from Hasbro's side. It will be interesting to see how Hasbro fares with this acquisition, as it could provide stiff competition to Mattel and other players in the industry. Additionally, Hasbro plans to roll out a number of new games in the first quarter of 2014 which should help the company boost its top line.

Looking ahead
Although its marketing and product innovation efforts were not up to the mark during the fourth quarter, Mattel plans to enhance its efforts in the current quarter. In fact, its marketing strategy for the American Girl brand worked well during the quarter, which is evident from its sales growth of 3% over last year.

Also, Mattel released two new video games during the quarter, which should start bearing fruit in the coming months. On top of that, the company has been trying to expand its retail footprint in the U.S. as well as the international markets, which should help in its growth.

Final views
Mattel is having a tough time and it has been unable to attract customers to its products, which has led to poor sales. Also, lack of product innovation is hurting the company. Hence, the toy maker needs to be more focused on the innovation and marketing. Competitive pressures from companies such as Hasbro might hamper Mattel's sales further. Although Mattel is trying to win back lost customers, it is prudent to wait until the company shows clear signs of recovery.