In a little more than two years the average Bakken per-well output has fallen 11%. In absolute terms North Dakota's production has grown 79%, but geological constraints are finally catching up. Now is the time for responsible drillers to start buying acreage in other formations and start planning for the era of low Bakken growth. 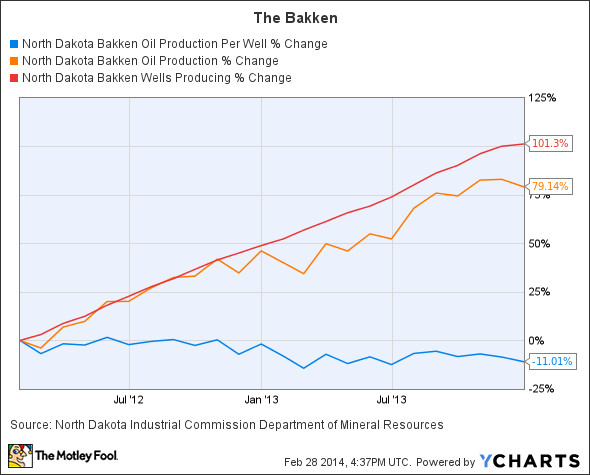 The split between the growth of total oil production and number of wells is a sign of the times. From the beginning drillers knew that horizontal wells' production curves decline at an accelerated rate, but increased drilling has put off the inevitable.

The problem is that retail investors are so attractive to growth that they can easily bid up companies with little respect to their future earnings.

Continental Resources (NYSE:CLR) is one of the biggest firms in the Bakken, producing 93.3 mboepd in Q4 2013. The company has a strong asset base and has seen extreme growth in the recent decade, but it is trading at a price-to-earnings (P/E) ratio around 26 with a total debt-to-equity ratio of 1.16, while EOG Resources (NYSE:EOG) is similarly valued with a significantly lower total debt-to-equity ratio of 0.38.

Production improvements
While North Dakota's oil production per well is falling, companies are still able to boost revenue and production by optimizing their drilling techniques. Whiting Petroleum (NYSE:WLL) is increasing production by increasing the number of frac perforations per stage, resulting in 52% to 61% increases in 90 initial production rates. The Bakken's Williston Basin is a big deal for Whiting, producing 63.5 mboepd in 2013.

Increased initial production rates are common across the board. From Q1 2013 to Q4 2013 Hess (NYSE:HES) was able to increase its average 30 day initial oil production rates for Hess-operated wells from 0.793 gross mbpd to 0.892 mbpd.

Hess is an exception, as it is not looking for growth at all costs. Recently it has sold off billions in overseas assets and was able to decrease its total liabilities by $4.3 billion from 2012 to 2013. It still plans to continue by selling off retail assets and its midstream Bakken assets in the next two years. Now Hess has one of the cleanest balance sheets with a total debt-to-equity ratio of 0.26, lower than Whiting's, EOG Resources' and Continental Resources' total debt-to-equity ratios.

Thanks to high oil prices the Bakken is very profitable, but a responsible driller will not put all its eggs in one basket or laden itself with too much debt. Chesapeake's recent asset sales show what can happen if you enter a downturn with your hands tied up in a dirty balance sheet.

EOG Resources is a good example of a company perusing responsible growth with a reasonable total debt-to-equity ratio of 0.38. Its big operations in the Eagle Ford produced 160 mboepd in 2013, but this was only 31.4% of its total production on an oil equivalent basis. The Barnett shale provided 17% of its production and other U.S. assets accounted for 35.5%. Combined with its international operations EOG is pursuing a profitable and diversified growth strategy.

Final thoughts
Investing in growth for growth's sake is a bad idea. Investing in sustainable growth is a good idea. EOG Resources and Hess both offer reasonable debt loads with exciting horizontal plays. Keep your eye on Whiting Petroleum and Continental Resources, but their debt loads are a big source of risk. If horizontal drillers enter a downturn with too much debt they will be forced to substantially cut capex, killing production growth and exposing the company to steep well decline rates.