Sales of Xtandi jumped double digit percentages quarter-after-quarter in 2013, but the company expects that winning streak will end as sequential growth in the U.S. slips to mid single digits this year. Decelerating growth suggests Xtandi is saturating the post-chemotherapy market, but investors should know that Medivation (NASDAQ:MDVN) is modeling for Xtandi growth to reaccelerate later this year following an FDA approval for use in pre-chemotherapy patients.

That suggests looking beyond the first two quarters to the third quarter, when the FDA's decision is expected, and the fourth quarter, when post-approval sales would begin. 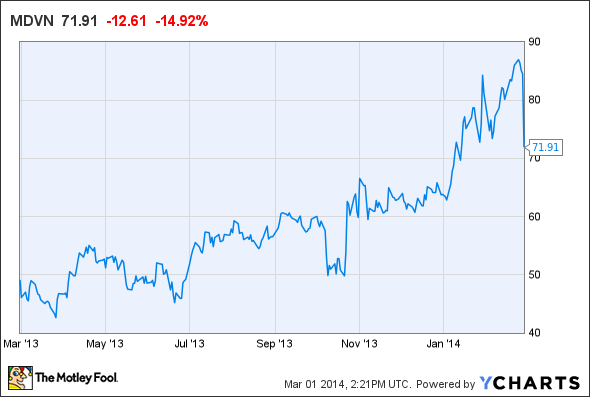 Pre-chemo is a potential game-changer
Questions surrounding slowing U.S. sales growth are due to the company's guidance for Xtandi sales totaling between $500 to $535 million this year. While that forecast is up from sales of $446 million in 2013, it's roughly in line with the annualized sales run rate of $126 million during the fourth quarter.

As a result, investors are right to wonder if the company's guidance is due to slowing demand, or a desire to under-promise and over-deliver. During the company's fourth quarter earnings conference call, analysts asked whether Medivation (NASDAQ:MDVN) is sand-bagging results for the year, or being conservative.

"The way that I would characterize it is -- it is a number that is based on data that we have sufficient confidence in, that we're willing to put it out and put our reputations on the line," was the response from Interim Chief Financial Officer C. Patrick MacHado.

That reply may suggest guidance is indeed on the conservative side. If so, a pre-chemotherapy approval, pre-launch inventory building, and a fourth quarter launch could significantly boost revenue into year end.

After all, once Johnson & Johnson (NYSE:JNJ) won the pre-chemotherapy indication for its prostate cancer drug Zytiga, sales of the drug surged 77% to $1.7 billion in 2013. Medivation (NASDAQ:MDVN) plans to file for Xtandi's pre-chemotherapy approval early this year, which means an FDA decision will hopefully come in the third or fourth quarter.

I believe that odds favor Xtandi getting the green-light from regulators thanks to a strong showing by Xtandi in its Phase 3 Prevail trial. Independent regulators halted that trial early so that those on placebo could switch over to Xtandi -- a ringing endorsement for Xtandi's efficacy. Xtandi patients not only saw a significant improvement in progression free survival, but nearly 80% them saw their PSA drop by more than 50%, versus just 4% for placebo.

If the FDA finds those results compelling enough for approval, Medivation (NASDAQ:MDVN) believes sequential growth will rebound into year end. "And following the receipt of the Prevail label, we would expect quarter-on-quarter demand growth to revert back to double-digit levels that we've seen historically," added MacHado in the conference call.

In its first full year of approval in key overseas markets, international sales of Johnson's (NYSE:JNJ) Zytiga grew nearly 90% in the fourth quarter to $284 million.

Since Xtandi is doing well in the U.S., it seems likely Xtandi's overseas sales will grow significantly this year as launches gain momentum. Fourth quarter sales, for example, accounted for $35.8 million of Xtandi's $52.8 million in international sales last year.

Fool-worthy final thoughts
Xtandi sales jumped 120% year-over-year in the fourth quarter, bringing full year sales to $445 million, up from $71 million in 2012. That performance translated into Medivation's revenue of $273 million in 2013, up from $182 million a year ago.

While the U.S. sales growth rate will slow in the first half of the year, Fools may want to focus more on the second half of the year given the potential for a pre-chemotherapy approval and associated milestone payments. That said, Xtandi is Medivation's only approved therapy, which means its shares are likely to remain volatile in 2014.