Many red flags for Allison Transmission investors are flying.

After the recent announcement of its 2013 fourth-quarter earnings, a bevy of 11 analysts is touting Allison Transmission (ALSN 1.00%) as either strong buy, buy, or hold through their recommendations. The stock showed a good jump in the immediate trading day after its Q4 result announcement, going up more than 3% to settle at $30.61. But before you jump to press the buy button, do a double-check. Is something amiss?

Take a close look
As an investor, you need to worry about a company's ability to churn out profits, worry about the quality of management, and worry about what a company's earnings announcement may not be telling you. And here in Allison's Financials, there is much information you may not grasp with a casual glance.

When you check the latest revenue figure, revenue of the company hardly increased in the last quarter of 2013 from the same period last year. But profit seems to have burst through the roof in the same period: 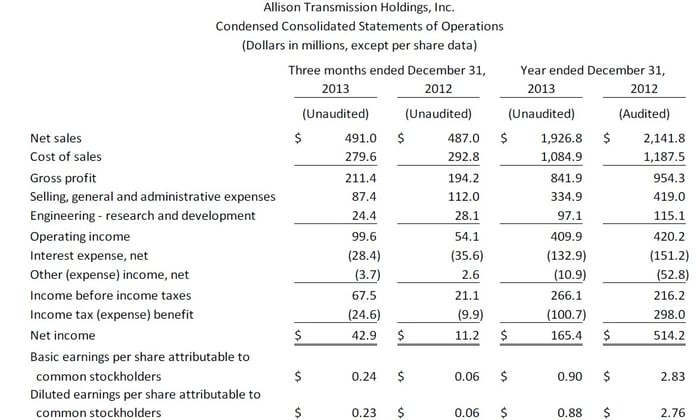 Profit yes, but is it from business excellence
The company had shown a surge in profit in this quarter by cutting down on "selling, general, and administrative expenses" compared with the same quarter last year. An explanation has been given as intangible product amortization and a product warranty charge.

Also, the company has shown lower cost of sales compared with the same period last year. This type of cutting cost couldn't be repeated in subsequent quarters and will put pressure on the profitability of the firm in next quarters compared with this reported quarter.

The management of the company in its earnings discussion with analysts was upbeat about its prospects outside North America in markets like Europe, China, Japan, among others. But if the company is reducing product research expense and marketing expense, how can it win in many of its new or early stage markets?

Mind you, in places like India, the firm is in its nascent stage of operation. So, if the firm reduces its marketing effort, it may lead to revenue loss in coming quarters.

You will get a better picture, when you consider the figures of its performance in various geographic segments:

You can understand that three out of its seven segments showed revenue growth in Q4. Even among the winning segments, service segment may not show the same support in future, if the company's product sales suffer. Outside of North America was one of the primary drivers of growth in this quarter. Therefore, cutting marketing cost and product innovation will not be prudent for the company.

The management and you
This auto parts supplier has had a long tradition, but what should interest you is that it was taken over from General Motors by a group of private equity firms in 2007. Now the major shareholders are the firms The Carlyle Group (CG) and Onex .

The private equity players and insiders had offloaded millions of shares in earlier years. The company had witnessed sustained bout of selling by insiders in the current quarter. The private equity firms' outlook hasn't changed, so why should yours change? If the insiders are selling shares, even when the company is reporting healthy free cash flow and net profit, you may need to worry. Be prepared for negative surprises.

Debt pile
Last but not the least, the company is sitting on a debt pile greater than $2 billion. By 2017, the company needs to refinance a large part of its long-term debt, a concern if interest rates go up. Also, as the company now focuses on paying back its debt, the marketing orientation of the company is affected. Hence, large debt will not allow the company to increase its market penetration efforts in many new markets.

Allison Transmission has strong free cash flow to take care of immediate and short-term financing needs, but a comfortable debt-to-equity ratio may not be easily achieved by the company in next few years, as the annual sales of the firm is only near $2 billion and annual repayment capacity could be capped around $300 million based on its net profit and free cash flow numbers.

What now?
When a stock trades at a P/E ratio of 40-plus based on trailing-12-months earnings, the investors expect a sustained momentum in sales growth year after year. Such a momentum is missing in Allison's sales.

As the focus is now on cutting costs and showing better operating margins, the company's sales growth could slow down considerably. This makes its shares unattractive. Also, as we have seen, analysts' bullishness is not well placed on this company. We need to see consistent outperformance from Allison to justify such valuation from the market and its analysts. Have you seen it? I haven't.

Tahir Haneef has no position in any stocks mentioned. The Motley Fool recommends General Motors. We Fools may not all hold the same opinions, but we all believe that considering a diverse range of insights makes us better investors. The Motley Fool has a disclosure policy.