Using solar power to generate electricity is a hot topic. However, it has some major limitations today, including the fact that solar only works while the sun shines. But that isn't the only issue, and the recently completed Ivanpah power plant shows just how big the other problems are.

A consortium effort
Ivanpah is a massive solar project backed by NRG Energy (NYSE:NRG), Google (NASDAQ:GOOGL), Bechtel, and BrightSource Energy. It's located in California and can generate about 400 megawatts of power. That's not bad and could easily replace an older coal-fired plant. For comparison, Southern Company's (NYSE:SO) high-tech Kemper coal plant, which is still being built and will feature carbon- capture technology, will produce nearly 600 megawatts. 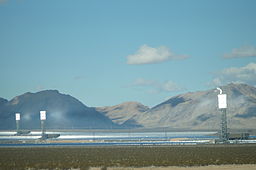 Forget the obvious difference that Southern's new coal plant is expected to run 24 hours a day, seven days a week (making it a reliable base-load plant) and that Ivanpah will only work while the sun is shining. Clearly using the sun is much more environmentally friendly than burning coal, which is why Google decided to kick in around $170 million for the project. The company is looking to get all of its power from renewable sources. Which pretty much sums up the environmental driving force behind Ivanpah and other solar projects.

The entire project, however, cost $2.2 billion, with a $1.6 billion loan guarantee from the Department of Energy. NRG and Google together dumped nearly half a billion dollars into the project. That's a lot of money for a power plant that generates less power than SolarCity's (NASDAQ:SCTY.DL) collection of rooftop-solar installations.

Although government mandates that utilities buy power from their customers with rooftop solar are supporting SolarCity's model, the company gets much of its funding from investors. It expects to have 500 megawatts of power installed by year-end. And, like it or not, SolarCity's model is scalable, Ivanpah's is not.

It's huge
The Ivanpah installation spans 3,500 acres. That's impressively large. In fact, it's so big that it can supposedly be seen from space. And that's the problem; there are only just so many places where you can put one of those. Although a slight exaggeration, SolarCity can slap a solar panel on any roof top that faces the sun.

The more traditional Kemper facility doesn't take up nearly as much room and can produce about 200 megawatts more power. That said, Southern's cost overruns on the Kemper plant, which is using new technology, are massive and have pushed the bill for the plant well beyond the cost of Ivanpah. So cost is, to some degree, a relative issue.

Size and cost, however, aren't the only problem with the giant Ivanpah facility. You'd expect environmentalists to dislike coal-burning Kemper, but they also tried to stop Ivanpah because its vast size reportedly put a species of tortoise at risk. It's hard not to have some environmental impact when your power plant covers 3,500 acres of land.

Happy buyers
Despite the limitations and problems with Ivanpah, it has two very happy customers: PG&E and Southern California Edison, owned by Edison International (NYSE:EIX). Both would much rather buy power from Ivanpah than have regulators force them to pay for power from their customers' rooftops. That's what's happening, and Edison International estimates that it's paying a $0.20 premium per kilowatt hour for the "privilege."

Solar power clearly has a part to play in the United States' energy future. However, power plants of the size and scale of Ivanpah will be hard to duplicate. Companies like SolarCity may be charting a better path toward solar, assuming solar technology advances enough to reduce or eliminate government-mandated subsidies.

But don't overlook the fact that U.S. Secretary of Energy Ernest Moniz was quick to point out the government's investments and commitment to fossil fuels at the opening of Ivanpah. Solar is a great technology, but it still needs reliable base-load power like Southern's Kemper plant to complement it.

In fact, here are three stocks set to benefit in a decidedly non-solar way...