Please ensure Javascript is enabled for purposes of website accessibility
Free Article Join Over 1 Million Premium Members And Get More In-Depth Stock Guidance and Research
By Adam Levine-Weinberg - Mar 4, 2014 at 11:11AM

Hawaiian Holdings, Inc. is dropping another route from its international network. Is this a good thing or should investors be worried?

Last week, Hawaiian Holdings, ( HA -2.39% ) announced that it will end its daily flights between Honolulu and Fukuoka, Japan, at the end of June. This marks the second international route that Hawaiian Airlines has canceled in the past year -- last April, the company decided to drop its four-times weekly service between Honolulu and Manila.

Investors could interpret Hawaiian's decision to pull back from some international markets in two ways. First, it could be seen as evidence that international expansion is not very promising for Hawaiian in general. Alternatively, it could be seen as a sign that Hawaiian has plenty of other opportunities to use its aircraft profitably, so it doesn't need to hang on to routes that aren't working out. Fortunately for shareholders, the second interpretation seems to be correct.

Irrational competition
On the Manila-Honolulu route, Hawaiian Airlines faced what appeared to be an irrational competitor in Philippine Airlines. Due to stiff price competition, Hawaiian's average fare on that route dropped to less than $400, barely enough to cover the price of fuel.

At the same time as Hawaiian announced that it was dropping the Manila service, it rolled out plans to fly from Beijing to Honolulu. (Those flights are scheduled to start next month.) Long term, moving this capacity from Manila to Beijing seems like a no-brainer. The growth of the Chinese middle class over the next decade should drive an explosion in demand for travel to vacation destinations like Hawaii.

Another one bites the dust
Fukuoka is now the second destination to get pulled from Hawaiian Airlines' international route map. It was not much of a surprise to learn that this route was continuing to underperform, as Hawaiian has run into a lot of bad luck with this service.

As of the summer of 2011, no airline flew nonstop between Fukuoka and Honolulu. However, in the first week of September, Delta Air Lines ( DAL -1.80% ) announced that it would fly the route seasonally beginning in late December. Just a week and a half later, Hawaiian announced plans to fly daily to Fukuoka year-round starting in April 2012.

Given the significant lead time associated with planning new routes, Hawaiian undoubtedly had been doing market research and was close to announcing its Fukuoka service when Delta stole its thunder. Additionally, Delta eventually upgraded its Fukuoka-Honolulu flights to year-round service. While the route probably would have worked if Hawaiian had the only nonstop flights, competition from Delta made it hard to find enough demand.

In October 2012, Hawaiian Holdings CEO Mark Dunkerley stated that the Fukuoka route was ramping up more slowly than the carrier's routes to Tokyo and Osaka (added in 2010 and 2011, respectively). However, he still characterized the route's performance as "good" relative to a typical new route.

Unfortunately, the yen began a six-month long slide against the dollar right around then. Since Hawaiian sells virtually all of its tickets for Japanese routes in yen, but nearly all of its costs are dollar-denominated, this shift made it a lot harder to earn a profit. Hawaiian would have needed to raise prices (in yen) by nearly 30% just to achieve the same financial results! 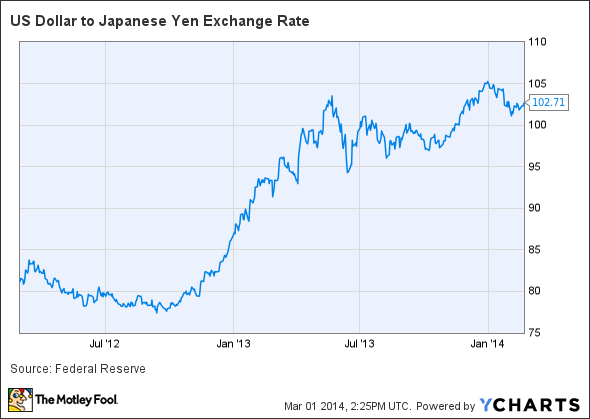 To make matters worse, Delta had hedged at least 50% of its yen exposure through 2015 in the 80 yen per dollar range. This has shielded Delta from the yen devaluation to some extent, giving it an artificial cost advantage. While the advantage is temporary, Hawaiian doesn't have the financial heft to play "chicken" with Delta, hoping that Delta would drop the Fukuoka route after its hedges run out in 2016.

Plenty of opportunities left
The timing of Hawaiian's decision to stop flying to Fukuoka is no accident. Hawaiian's routes to the West Coast performed very well last summer, and the capacity that would have been devoted to Fukuoka flights is now available for additional summer seasonal service.

Beyond the summer, Hawaiian has several options for this extra capacity. One likely alternative is that it will boost frequencies on some of the routes that it flies less than daily. For example, Hawaiian is adding a fourth weekly flight to Brisbane, Australia, at the end of this month, but it has expressed interest in eventually moving to daily service there.

Hawaiian could also use the extra capacity to add another city to its route network -- either an eastern U.S. gateway like Boston or an Asian gateway like Hong Kong. Lastly, it could bolster its Maui hub by adding direct flights to Maui from one of the West Coast gateway cities, where it only flies to Honolulu at present.

On the way up
Hawaiian Airlines has plenty of profitable routes and plenty of expansion opportunities. Thus, it's actually comforting to see that management is willing to pull the plug on routes that aren't working. The Manila and Fukuoka routes both faced unique challenges, whereas Hawaiian's international routes to Tokyo, Osaka, Sydney, and Brisbane quickly became successful, and its routes to other cities like Seoul, Taipei, and Auckland seem promising.

Dumping the low-performing routes to Manila and Fukuoka should help Hawaiian Airlines return to solid unit revenue growth in its international business by this summer, after enduring double-digit declines last year. This will provide a better platform for future growth. Shareholders don't need to worry much about Hawaiian's long-term strategy.