Large insider holdings are often a sign of a great investment for at least two good reasons. For one, the people who run the business see enough value to maintain large personal holdings in the stock. Secondly, being large shareholders themselves, the big insider owners are likely to align their policies and strategies with the interests of investors.

I found three Dow Jones Industrial Average (DJINDICES:^DJI) stocks with large insider holdings in addition to the one I highlighted a couple of weeks ago. Nike had impressed me with a founder who still owns 19% of Nike shares -- and keeps an active hand in managing the business.

Uh-oh. These three large insider stakes might not drive company policies as strongly as I had hoped.

What's wrong with Disney?
The late, great Steve Jobs built his legacy at Apple, but he made his fortune selling Pixar to Disney.

That deal made Jobs a Disney board member and also the House of Mouse's largest shareholder. And owning Disney shares has been a great wealth-building tool since the game-changing Pixar acquisition. 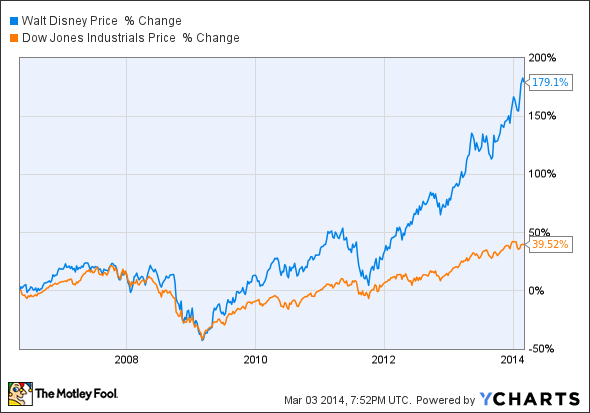 But Steve's widow, Laurene Jobs, did not inherit his Disney board seat. Her Disney shares and options add up to a 7.5% ownership stake with no input on how to run the company -- nor any experience in managing a global business. The rest of Disney's board and management team hold about 0.1% of the stock combined. CEO Bob Iger owns 0.07%.

That's hardly an ideal insider-ownership structure, given that Ms. Jobs isn't much of an insider. There are plenty of reasons to love Disney's stock, but strong insider ownership isn't one.

What's wrong with Coca-Cola?
Jimmy Williams served on Coca-Cola's board of directors from 1979 to 2013. Over that 24-year span, Williams built a massive stock position in Coke equivalent to 4.4% of the soft-drink giant's total market value. With that kind of experience, it's safe to say that he knows the business like the inside of his eyelids.

But Williams is no spring chicken, and he retired from Coke's board last spring at a sprightly 79 years old. So 4.4% of Coke's shares sit in a retired board member's portfolio. According to S&P Capital IQ, Coke didn't even keep him around in an advisory role.

So once again, the lion's share of insider holdings belongs to someone not involved in running the company. Only 0.7% of Coke shares belong to current company leaders, led by director Herbert Allen at 0.3%. Chairman and CEO Muhtar Kent owns just 0.01% of the company, which doesn't qualify as aligning his strategies with shareholder interests.

What's wrong with Microsoft?
Of the three insider structures we're looking at today, this situation is my least favorite. In my eyes, it's downright poisonous.

Top owner Steve Ballmer retired as Microsoft CEO last month. He did so with a hefty 4% of the company's shares to his name. His replacement, Satya Nadella, owns just 0.01%. If you thought Microsoft founder Bill Gates would hang on to a large position, you're wrong: Neither Gates himself nor the Bill and Melinda Gates Foundation appears in the roll call of Microsoft's top 250 owners.

Okay, so there's another ex-leader keeping a large position in his old company. What's so wrong about that?

In this case, Ballmer stays on Microsoft's board of directors for the time being. Normally this would be a good thing, because he's keeping direct tabs on the biggest portion of his personal investment portfolio. But Ballmer isn't your average ex-CEO, retired at peace in old age. At the age of 57, he's actually pretty young for a Dow CEO.

No, Ballmer retired early after a 13-year stint of leading Microsoft in circles -- and shareholders sideways at best. It's a little unfair to judge Ballmer all the way back to early 2000, as Microsoft and the entire IT industry took it on the chin over the next couple of years. But Microsoft shares haven't kept up with the Dow under Ballmer, even if you start counting after the dot-com embers died down. 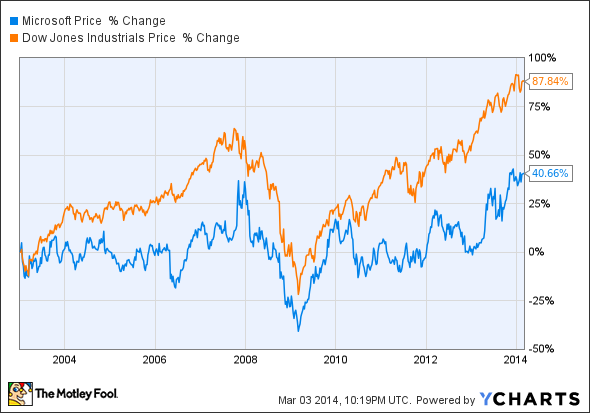 Giving a failed leader an opportunity to push his agenda in the boardroom -- backed by a 4% stake in the company -- does not sound like a good idea. That's why Ballmer's large insider holdings make me queasy. One can only hope that Satya Nadella has the zest and the clout it takes to override Ballmer's protests when they clash in the boardroom.