Molina Healthcare (NYSE:MOH), the private Medicaid insurer, has a big problem on its hands. So many people are signing up for Medicaid insurance that the company is spending big money hiring new people to serve them.

As a result, the company's quarterly selling, general, and administrative, or SG&A spending has jumped more than $50 million since the middle of 2012. That increase is one reason why Molina's (NYSE:MOH) operating costs have climbed from $5.87 billion in 2012 to $6.45 billion in 2013. 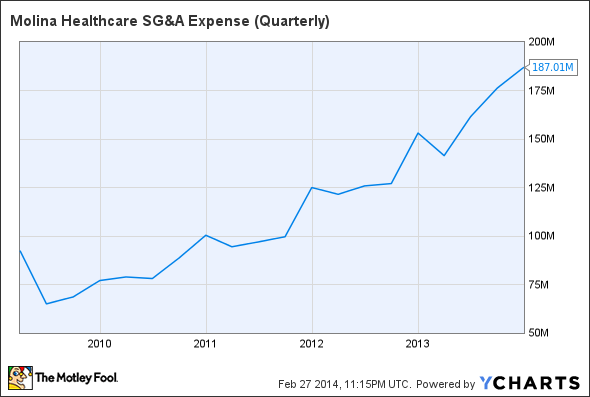 Razor thin margin
Molina's (NYSE:MOH) Medicaid focus means it isn't as profitable as other insurers. The medical care ratio for treating Medicaid patients is substantially higher than individual and commercial markets. In 2013, for example, a medical care ratio of 87% led to anemic margin of just a shade above 2% -- far less than the over 7% margin posted by the more diversified insurance giant United Healthcare (NYSE:UNH). 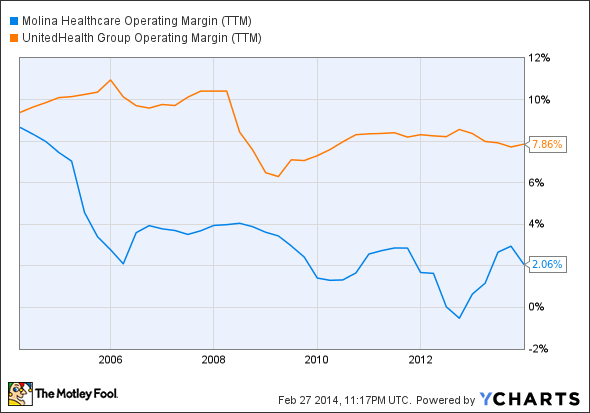 That skin-tight margin means the industry is unquestionably a business of volume. Historically, that volume came from competitors like Molina (NYSE:MOH), WellCare (NYSE:WCG)and Centene (NYSE:CNC) under-bidding one another.

While competitive bidding will remain a major source of risk and reward for the industry, the Affordable Care Act, also known as Obamacare, has opened up Medicaid coverage to millions of new people, in turn giving private Medicaid insurers one of their biggest gifts since Medicaid managed care was created in the 1980s. That means Molina (NYSE:MOH), WellCare (NYSE:WCG), and Centene (NYSE:CNC) have an opportunity to grow without cannibalizing each another.

That expansion has already resulted in more than 3 million people signing up for Medicaid since health care.gov went live last fall, and analysts estimate more than a million of them are newly eligible thanks to reform.

Growing sales opportunity
Molina (NYSE:MOH) racked up $6.58 billion in sales during 2013, up from $5.9 billion in 2012. Fourth quarter sales totaled $1.7 billion, up from $1.58 billion a year ago. That represents solid growth, but even better growth may be coming.

In February, Molina (NYSE:MOH) issued guidance calling for total revenue reaching $9.9 billion in 2014. If all goes as planned, that revenue spike will translate into earnings per share of between $4 and $4.50 per share, well north of the $3.13 the company earned in 2013, and significantly above the $1.72 Molina (NYSE:MOH) earned in 2012.

That revenue and profit advance is being driven by Medicaid enrollment, which has grown to more than 2.1 million people across California, Florida, Illinois, Michigan, New Mexico, Ohio, South Carolina, Texas, Utah, Washington, and Wisconsin as of the end of February. That's up from 1.9 million members at the end of December.

Washington and California remain Molina's (NYSE:MOH) most important markets, representing nearly 40% of its Medicaid members. That's important, because both these states embraced Obamacare's Medicaid expansion. California is reporting more than 1.5 million people have enrolled or been found eligible for its Medi-Cal Medicaid program since October 1st. And more than 300,000 people signed up for new coverage in Washington's Medicaid program between October and February 25th -- including 200,000 who were newly eligible, and 100,000 who were previously eligible but hadn't previously signed up.

That's a sharp contrast to competitor Centene (NYSE:CNC), which does a lot of business in Texas, Georgia, Florida, and Mississippi -- all states that have not expanded Medicaid (although Florida still might).

It's also in contrast to WellCare (NYSE:WCG), whose top two markets include Georgia, which didn't expand coverage, and Florida. WellCare's third biggest market, however, is Kentucky, one of the most successful states in signing up new recipients. As a result, the number of people covered by WellCare (NYSE:WCG) in Kentucky grew to 292,000 in December from 207,000 a year ago.