Please ensure Javascript is enabled for purposes of website accessibility
Free Article Join Over 1 Million Premium Members And Get More In-Depth Stock Guidance and Research
By Tyler Crowe - Mar 4, 2014 at 11:15AM

With the situation in Ukraine looking bleaker by the day, natural gas prices in Europe are on a rapid climb. This would be less of an issue once BP can get its Shah Deniz gas project off the ground.

Think of the global energy markets like a spider web. Each single strand connected to another, but some of the strands are more critical to the entire structure. Take both Syria and Ukraine. Like a short strand in the middle of the web, the Syrian civil war has had little impact on the greater energy market because it is not a major producer, consumer, or major transport hub. Contrast that to Ukraine, which is a much more critical part of the web. Its geographic location makes it the gateway for the European natural gas market, and the potential disruption of that gateway could send Europe into an energy crisis.

While this situation looks dire to many, BP ( BP -0.55% ) should see this as a great opportunity for one of its projects. Let's take a look at why Ukraine's civil strife could send Europe's gas prices through the ceiling and why BP is in such a great position to change it. 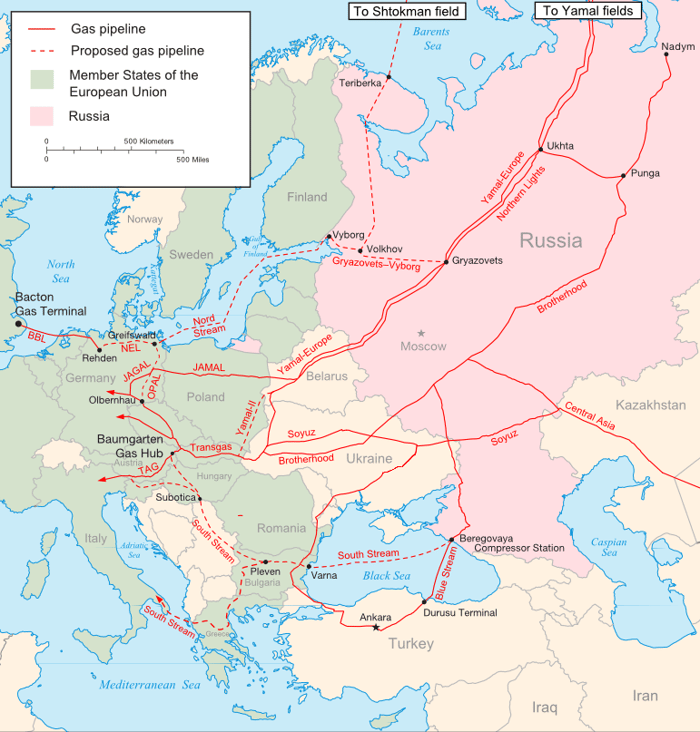 Ukraine itself is not a major energy player when it comes to the consumption or production of natural gas. What makes it so important, though, is its location between the natural gas fields in Russia and the demand centers of Europe. The natural gas that flows through Ukraine represents 34% of all imports to the European continent, and all of that gas originates from Russia. For years, this has made the relationship between Ukraine and Russia so important to natural gas across Europe.

To give an idea of how important this relationship is, we only need to look back to 2006. Russia's Gazprom and Ukraine found themselves in a pricing battle that resulted in Gazprom shutting off the gas to Ukraine. Within hours of the pipes closing, France, Germany, Italy, and several other European nations all saw gas line pressure drop by at least 30%. Luckily, the conflict only lasted four days and deliveries of gas were restored.

If the conflict in Ukraine were to persist, there is a chance that something similar could happen, which would strike a major blow against a slowly recovering European economy. Several projects from Russia such as the Nord and South Stream Pipelines provide crucial links between Russia and Europe without passing through Ukraine, but the recent standoff over Russia's involvement in Crimea could put many European countries in a difficult situation regarding intervening in the conflict and energy security.

From conflict, opportunity
The tension over the conflict in Ukraine makes one thing very clear in the energy market: Europe needs to diversify its energy sources. Liquefied natural gas will certainly play a large role in it, but there is one project operated by BP that could have an even deeper impact: the Shah Deniz gas project.

Shah Deniz and the adjacent work on the Trans-Anatolian and Trans Adriatic Pipelines would be one of the first established links between the gas fields of the Caspian Sea and continental Europe that would not traverse either Ukraine or Russia. Once fully complete, the entire project will supply Turkey and European companies with 2.5 billion cubic feet per day. This amount is equivalent to almost 10% of Europe's total imports.

While it may be a good idea for Europe, this is a great outcome for BP and its partners in the project, the Azeri national oil company SOCAR and Statoil ( EQNR -1.81% ). Current prices for imported gas in Europe hovers at about $11 per thousand cubic feet, almost double the price for an equivalent amount of gas here in the United States today. By choosing to construct a pipeline instead of trying to construct an LNG facility, BP and its partners will be able to avoid the higher costs of liquefaction and transport of LNG. Once the second phase of the project is completed in 2018, its production will generate just under $10 billion in revenue annually based on today's European spot prices. Also, based on the size of the natural gas find, the project should have a life of more than 40 years.

Recently, Statoil has sold part of the project back to BP and SOCAR, reducing its working interest from 25% to 15%. Also, Total ( TTE -0.46% ) has announced that it will sell its entire stake in the project. Some might consider these signs that the project is doomed, but they are both more indicative of the situaion for both individual companies. Statoil has said it wants to focus more on some recent offshore discoveries in Norway, and Total is looking to shed several assets off its books where it is not the operator.

What a Fool believes
BP isn't the only one to see supplying gas via pipeline as a highly profitable venture. Noble Energy ( NBL ) has mulled over the idea of supplying gas to Europe via pipeline from its recent gas discoveries in the offshore regions of Israel and Cyprus, but it is running into a slew of problems. Ultimately, though, projects like BPs should not only provide a crucial diversification of the European gas market, but it will likely be a core asset for BP for many years to come as it starts to rebuild its portfolio following the Deepwater Horizon sell-off.