There is no doubt that Apple's (NASDAQ:AAPL) silicon team is one of the most -- if not the most -- impressive in the mobile world. The A7 is a fantastic processor that brings a great user experience to the iPhone 5s and both the iPad Air and the iPad mini with Retina display. Many focus on the 64-bit marketing point. But 64-bit or not, the A7 is a high-performing, well-balanced system-on-chip for tablets and phones -- but it's still a far cry from what Intel (NASDAQ:INTC) provides for the MacBook Air and above.

Rolling its own makes sense for the iOS devices
Designing a system-on-chip and all of the IP that goes into it is neither easy nor cheap. To justify doing it, either for customization's sake or in order to save money, a company needs to have the following:

In the case of the Apple A-chip for iOS devices, it's clear that Apple has different design goals and priorities than the majority of the other merchant chip vendors -- a focus on high single-thread performance and GPU performance. Further, with roughly 250 million iOS devices shipped per year, the development costs per A-chip -- likely in the area of $300 million-$400 million and getting more expensive each generation -- can be amortized over a large number of units.

However, this is far from the case when it comes to the Mac.

Mac volumes are relatively tiny, chips more complex
The performance level of an iMac, MacBook Pro, or even MacBook Air is substantially above that of the iPhone or iPad, thanks to a much larger thermal budget. Only Intel, which has a pretty substantial manufacturing lead for high-performance processors, can offer the kind of performance per watt that it does with its Core processors. Further, as the PC Client Group represents over $30 billion per year in sales for Intel, the investment level here is justifiably very large. Apple would have to spend quite a bit in order to even come close -- and it's running with a manufacturing disadvantage. 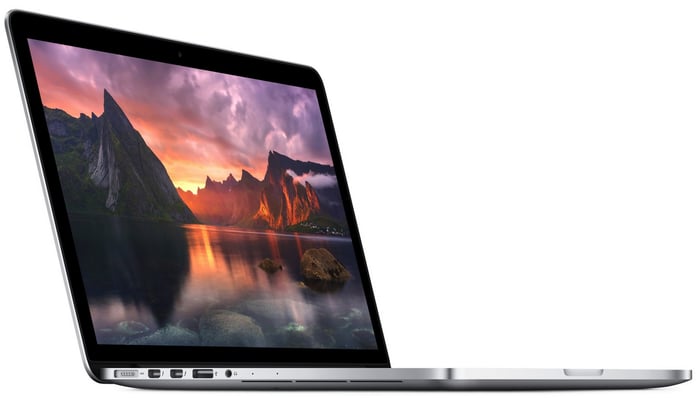 It's important to understand the kinds of volumes we're talking about here. While the iOS devices shipped per year number in the hundreds of millions, total Mac sales during fiscal year 2013 added up to a mere 16 million. An A-series chip is unsuitable for the kind of performance and power needed for these machines. Since each type of Mac -- MacBook Pro, MacBook Air, iMac, and Mac Pro -- would require a different SKU at a different power/performance level, it could become pretty messy for a company like Apple, which prides itself on finely tuning one design each year.

Intel is willing to do the work!
What's even more telling is how Intel seems to be working very closely with Apple in designing these processors. The MacBook Air was first out of the gate by far with an Intel Haswell-ULT -- that's the low-power, 15-watt variant -- while the rest of the Windows world didn't roll out with machines based on this chip until late 2013. On top of that, it's hard to miss that Intel essentially did the Iris Pro, a quad-core Haswell with a giant eDRAM cache, as a custom job for Apple. The Cupertino-based company seems to be the only one really deploying it in volume.

So, why would Apple give up this relationship in which Intel, the world's largest and most powerful semiconductor company, is willing to bend over backwards for it, particularly for chips aimed at a little-to-no-growth product line? The return on investment in doing a custom, MacBook/iMac-oriented processor simply isn't there for Apple. But Intel is certainly willing to do it.

Foolish bottom line
While every so often there is a vocal Intel bear declaring that Apple is going to boot Intel out of the Mac, it really makes no sense for Apple to do so. Apple may be great at low-power SoCs, but when it comes to high-performance CPUs, there really isn't a better company at its job than Intel. The odds that Apple boots Intel out of the Mac are almost as low as the odds of Apple packing in its in-house silicon development team in favor of Intel-based chips for its iOS devices.