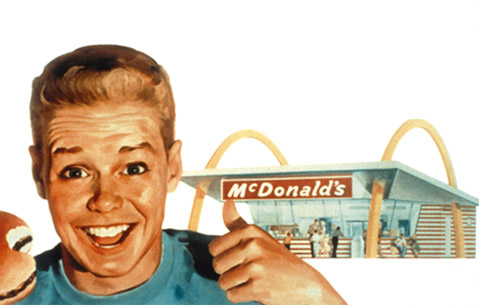 McDonald's (NYSE:MCD) is the biggest, most successful restaurant company in the world, with 35,000 locations serving 70 million people daily. In 2013, It made more than $28 billion in sales, and $5.5 billion in profits. But times have been tough lately. Comps are down in the U.S. The stock has lagged the broader market. And consumers seem to be flocking to rivals like Chipotle (NYSE:CMG), Starbucks, and Panera instead of the Golden Arches..

The quote below from CEO Don Thompson in the company's latest earnings release may best sum up its current waywardness.

"While 2013 was a challenging year, we begin 2014 with a renewed focus on the global growth priorities that are most impactful to our customers. We are uniting consumer insights with innovation and consistent execution to optimize our menu, modernize the customer experience and broaden accessibility to Brand McDonald's."

If you're confused, you're not the only one.

That vision thing
While Thompson's statement is sure to be a winner for those of you playing MBA bingo at home, it does a terrible job of serving the purpose of an earnings release: informing shareholders and the general investing public. Thompson's statement was pure boilerplate/consulting-speak that tells the reader nothing. It's a reflection of a company that's lacking in original ideas, and the words of a visionless leader who sees his job as maximizing shareholder value, rather than innovating and running great restaurants.

Perhaps it's no surprise, then, that McDonald's stock has significantly underperformed the market during his tenure, which began in July 2012, as the chart below shows. 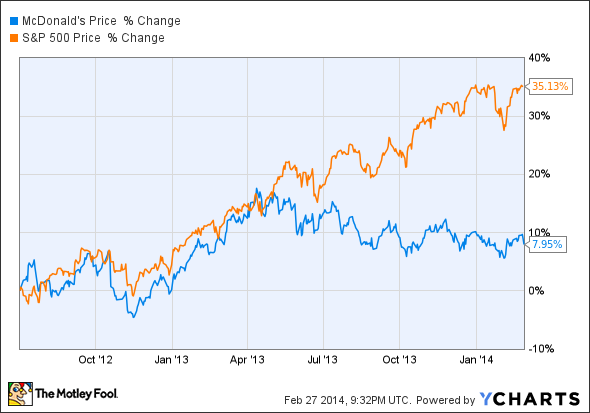 Since former CEO Jim Skinner announced his retirement in March 2012, the stock has actually fallen slightly.

Chipotle is a place that appeals to a diverse customer base throughout the country and beyond. We offer our customers a range of flavors from a focused selection of beautiful, top-quality ingredients that are expertly prepared by a passionate team of extraordinary people. Our focus on our unique people and food cultures has created an impressive demand for a restaurant experience that is redefining fast food for the better.

Now that sounds like a CEO who knows his business and understands what's driving his success. It's the statement of a founder who believes in something greater than simply "creating value." Ells regularly touts his company's high-quality ingredients and use of classic cooking methods on Chipotle's earnings calls, and food quality and integrity have become a staple of the brand, as seen in its recent animated short films.

That statement may also explain why Chipotle has become the restaurant industry's biggest rising star, at the head of the fast-casual movement it started. Shares are also near their all-time high, having appreciated more than 12 times since the company's 2006 IPO.

How the hunter became the hunted
More than any other restaurant company, McDonald's is responsible for the innovations that have come to shape modern fast food, pioneering concepts like the drive-thru, the Chicken McNugget, the Big Mac, and the Egg McMuffin, all of which have become industry standards. For decades, it was the trendsetter, but these days it seems to be getting left behind by a new generation of fast-food slingers. Its menu additions, such as its McCafe line, are often borrowed from competitors, and its restaurant redesign seems to be an imitation of Chipotle's minimalist decor. Core branding elements like its red-and-yellow colors and television advertising, both of which became industry staples, are also noticeably rejected by newer chains like Chipotle, which prefer earth tones and a more organic form of marketing. All of this adds up to a company in the midst of an identity crisis. It just doesn't seem to know it yet.

American consumers' higher standards for food and greater health concerns also look like bad news for McDonald's. In the fourth quarter, McDonald's U.S. locations saw a 1.4% drop in comparable sales, while Chipotle's jumped 9.3%. At a time when consumers' palates and tastes are changing, McDonald's needs to realize that Americans aren't looking for restaurants to be "impactful" or to "unite insights with innovation." As Ells understands, they want fresh, high-quality food from a brand they can identify with .

Thompson needs to figure out what McDonald's stands for in the 21st century, and what direction he wants to take it in. Otherwise, this burger chain could be cooked.