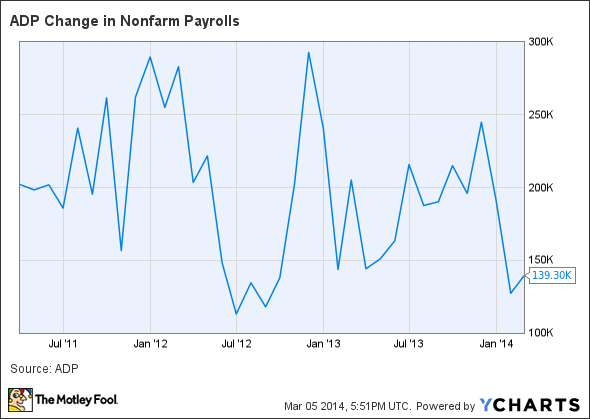 The second report was the Institute for Supply Management nonmanufacturing purchasing managers' index, which fell from 54% in January to 51.6% last month, below analyst expectations of 53%. Readings above 50% indicate economic expansion while anything below 50% indicates contraction. The index was led down by a 8.9 percentage point drop in the ISM nonmanufacturing employment index from 56.4% to 47.5%, an indication of slower job growth.

Many economists have tried to lay the blame for slower economic growth and jobs on the terrible winter the U.S. is experiencing, but as Federal Reserve Chairwoman Janet Yellen noted last week: "A number of data releases have pointed to softer spending than many analysts had expected. Part of that softness may reflect adverse weather conditions, but at this point it is difficult to discern how much."

The Federal Open Market Committee meets in two weeks to discuss monetary policy. Given the last statement from the committee and recent speeches from its members, I fully expect the Fed to continue with the taper of its long-term asset purchases.

Your investment strategy shouldn't depend on the latest economic releases. The story remains the same. The economy continues to slowly grow, the housing market is slowly getting healthier, and the market is still overvalued. I'm holding some extra cash, continuing to educate myself, find great companies, and invest for the long term.