BlackBerry (NYSE:BB) held out as long as it could. But this week the company rolled out beta testing of featured placement, sponsored posts, and sponsored invites in its BBM messaging app. The move is a big step in the right direction for a company that can no longer rely on hardware sales to keep it afloat. 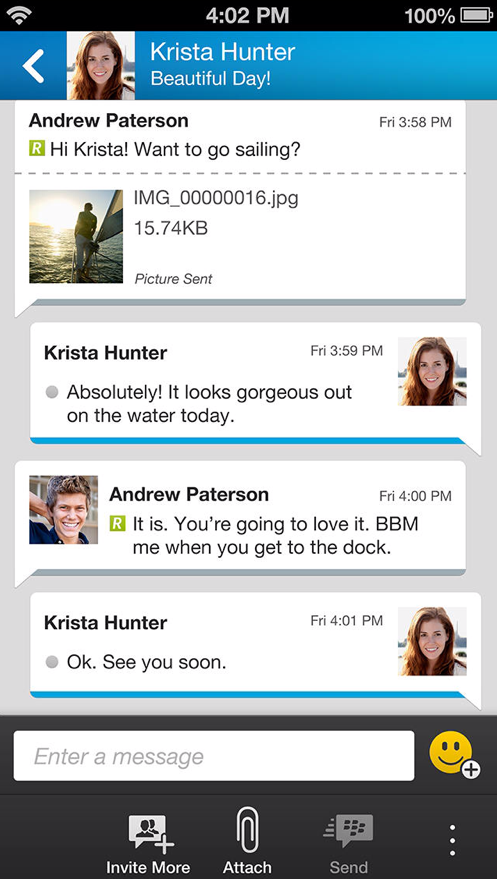 To understand how this is good for BlackBerry, let's take a quick look at what the company is testing. To be clear, all of this is in beta mode right now, so not all users are seeing it.

So let's quickly dissect what BlackBerry is doing here. The company is offering content creators three ways to pay to have their content pushed out, while still giving BBM users the capacity to control how they see that content. This sounds like a win-win.

Compare this strategy to Twitter's sponsored tweets. Twitter allows for sponsored tweets that show up in a user's feed, which is actually a bit more invasive than BBM's strategy. BlackBerry is regulating sponsored posts to the updates screen, where users are already accustom to seeing content. BBM users can theoretically still access the chat options and never see sponsored post if they don't want to.

As for featured placements, this doesn't seem that much different than Facebook curating content to the sections in its Paper app. Users select general themes in Paper and then receive content based on those themes, but they don't decide who the initial content comes from. Featured placements are paid for, unlike Facebook's curated content, but could still deliver relevant content to users as long as BBM uses the demographic information correctly.

It's possible the sponsored invites may become a nuisance, but just like sponsored posts, BBM users can still access the chat section without having to see any of the invites. Again, this is still in beta mode and if BlackBerry decides its users are being oversold, it could easily change how all this works.

Foolish thoughts
I've been skeptical about BBM's ability to turn BlackBerry around, and the new sponsored options don't change my opinion. But it's hard to argue with BlackBerry experimenting with new ways to generate revenue. BBM has about 80 million active monthly users right now, and testing the waters with a few sponsored solutions is exactly what the company should be doing with the app.

While valuing revenue from BBM right now would be purely speculative, investors should watch for any changes made to the beta testing. It's my guess that BlackBerry will keep around all three options when it launches them to all BBM users, at which point the company is likely to talk more about how much revenue the new features are generating. That probably won't happen for a few more months, but it should give BlackBerry investors something to look forward to.