The fourth Jurassic Park film is set to hit theaters next summer, and early details surrounding the dino-drama are promising.

It's been two decades since dinosaurs first roamed free in Jurassic Park, and now a fourth film is finally in the works. Set to hit theaters next summer, Jurassic World should give hardcore fans all the Velociraptor and T-rex action they can handle. But will the movie be better than Jurassic Park III, widely considered the worst installment in the franchise?

I think it's headed in the right direction -- here's why.

1. A return to its roots
Unlike The Lost World and JP3, Jurassic World will reportedly include Isla Nublar, the site of the original film. According to director Colin Trevorrow, the new story is "set 22 years after the horrific events of Jurassic Park." Although plot details are just rumors at the moment -- it could follow everything from a cleanup operation to a modern-day park -- Trevorrow's admission is important for one reason: Jurassic World will not be a reboot. By returning to its roots without restarting the story, the film can satisfy new and old fans alike.

And as Screen Rant wrote recently, a setting on Isla Nublar "also gives the filmmakers the opportunity to dip back into the source material and pursue certain plot points from Michael Crichton's [first] book that were abandoned in the first film." Remember Crichton's terrifying river raft chase, or Dr. Grant's hunt for raptor nests? Both would make intriguing scenes in World, as would rumored underwater dinosaurs.

2. Dino-humans probably aren't involved
Perhaps the best thing about the fourth film, though, is that it likely won't involve dino-human hybrids. After some odd concept art went viral a couple of years ago, Industrial Light & Magic said it was not theirs, squashing speculation that World would feature gun-toting, half-human, half-dino creatures.

Instead, Jack Horner, a paleontologist and consultant for the new film, told USA Today an entirely new dinosaur will be featured. "You'll want to keep the lights on after you see this movie," he told the outlet. Nothing has been revealed yet, but everything from Utahraptors (a larger version of the Velociraptor) to Troodon, a highly intelligent nocturnal creature found in Jurassic Park: The Game, could be involved.

3. It's already near production
Ever since Steven Spielberg first mentioned it in 2002, talk of a fourth film has captivated fans. A release initially set for 2005 was pushed back to 2007, and then indefinitely after a script could not be agreed upon. After more delays, Comcast's ( CMCSA -1.80% ) Universal Pictures finally announced last year that Trevorrow would direct Jurassic World and Spielberg would serve as an executive producer. More recently, Chris Pratt (who's also leading Guardians of the Galaxy) and Bryce Dallas Howard have signed on to star, along with Irrfan Khan of Life of Pi, and Vincent D'Onofrio.

In an interview with MTV, Pratt said his character, Owen, has "a little bit of the [Jeff] Goldblum cynicism, but also the Sam Neill excitement," when asked how he'll compare to the original film's protagonists. With World set to begin filming in Hawaii soon, the movie has progressed further in the production cycle than previous iterations -- a positive sign for its future.

The business of killer dinosaurs
Universal has set a June 2015 release date on the film, and due to the franchise's history of box office success, expectations are likely high. 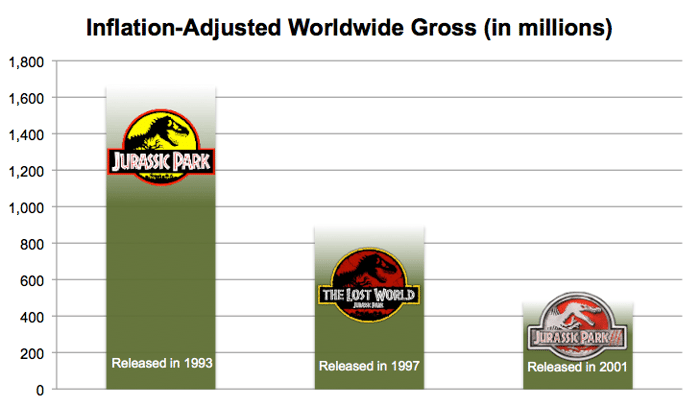 On average, the inflation-adjusted gross of its three predecessors -- 1993's Jurassic Park, 1997's The Lost World: Jurassic Park, and 2001's Jurassic Park III -- is a little over $1 billion per film. The first installment has been the most successful by far, and even though the third made significantly less, it still generated a profit of $275 million. In fact, no Jurassic Park film has had a budget above $100 million, which makes early rumors -- claimed by a source with "insider information" -- of a $200 million budget for Jurassic World all the more intriguing.

There's no way to pinpoint how much Universal will spend or make on the film, but if history is any judge, a $400 million gross would be a reasonable ground floor estimate. A lack of blockbuster competition next June also bodes well for World. Big budget peers Fast & Furious 7 (April), Avengers: Age of Ultron (May), Mad Max: Fury Road (May), Terminator: Genesis (July), and Star Wars: Episode VII (December) are all scheduled to debut in different months, giving the film some breathing room.

The bottom line
While there's a chance Colin Trevorrow's project could miss the mark, early details are promising. A return to Isla Nublar is a best-case scenario for Jurassic World, and talk of a new dinosaur adds an extra layer of excitement. As I've said before, Chris Pratt could become the modern day Harrison Ford, and his role as a hybrid of Jurassic Park's main protagonists should endear him to audiences.

If the film can simply generate the same amount of revenue as Jurassic Park III made over a decade ago, it will be a box office success. A billion-dollar take is certainly possible if the cards fall right.