Marvel's 'Guardians of the Galaxy' is generating a ton of buzz, but critics say the sci-fi comedy will flop. Here are five reasons they're wrong.

What hasn't been said about Guardians of the Galaxy's first full-length trailer? It's energetic, quirky, and unexpectedly amusing for a sci-fi epic. Half Star Wars, half Firefly with a dash of Indiana Jones, Disney (DIS 0.85%) and Marvel Studios hold the keys to a potential blockbuster.

1. The Marvel tie-in
The movie is based off Marvel's 2008 comic book series, and has significant ties with The Avengers'  battle against alien supervillain Thanos. Director James Gunn has said in the past that it is "connected to The Avengers 2 [Age of Ultron]," which is set to be released in 2015, adding, "at some point in time they'll all meet up with different characters throughout the galaxy."

Peter Quill (Chris Pratt) giving the finger in the 'Guardians of the Galaxy' world premier trailer.

In a vacuum, worries that Guardians is too obscure to go mainstream are warranted, but that's simply not the reality. Gunn's film not only has the blessing of Marvel, it will also play a key role in developing "Phase 2" of the company's comic-to-film rollout, which, after Thor: The Dark World and Captain America: The Winter Soldier, will culminate with Avengers: Age of Ultron.

2. It can toe the fine line
As PolicyMic wrote recently, Guardians "translates the oddball elements of the original comics from page to screen." Although expansion of the Marvel universe is important, the film's most essential element may be its ability to cultivate a bravado that's been missing from most recent films in the genre (the Iron Man trilogy is the lone exception).

But it's a balancing act, and a risky one at that. For every Twelve Monkeys, there's a Pluto Nash. A fine line between funny and silly exists in the realm of sci-fi comedy, which is what makes the Internet's reaction to the first Guardians trailer so promising.

"Hooked on a Feeling," a rock pop hit from four decades ago, saw its daily downloads skyrocket 700% last week after being featured in Guardians' world premier TV spot. The song's presence on Peter Quill's Walkman sets the tone for the quirkiness so proudly on display in the trailer.

Fizziology also reports that after the reveal, the movie's Twitter (TWTR) and Facebook (META 2.53%) mentions outranked the debut of 2013's Man of Steel and rivaled The Amazing Spider-Man 2. In an interview with TheWrap, the research company revealed that "a lot of people didn't know how the film was going to work...but they [Marvel] nailed the tone," adding, "you see that reflected in the social media reaction."

3. The marketing machine
With that in mind, the Marvel marketing machine appears to be embracing sci-fi comedy at a level not seen before. All three Iron Man movies have had their laughs, but their trailers have focused on explosions and high-tech suits of armor, not Robert Downey, Jr.'s witty portrayal of Tony Stark. Likewise, the Thor and Captain America campaigns -- and movies themselves -- prefer gravitas over humor.

Sticking with Guardians' unique tone, Marvel has already released five behind-the-scenes "Meet the Guardians" videos, and a new poster that dons the phrase, "You're welcome." 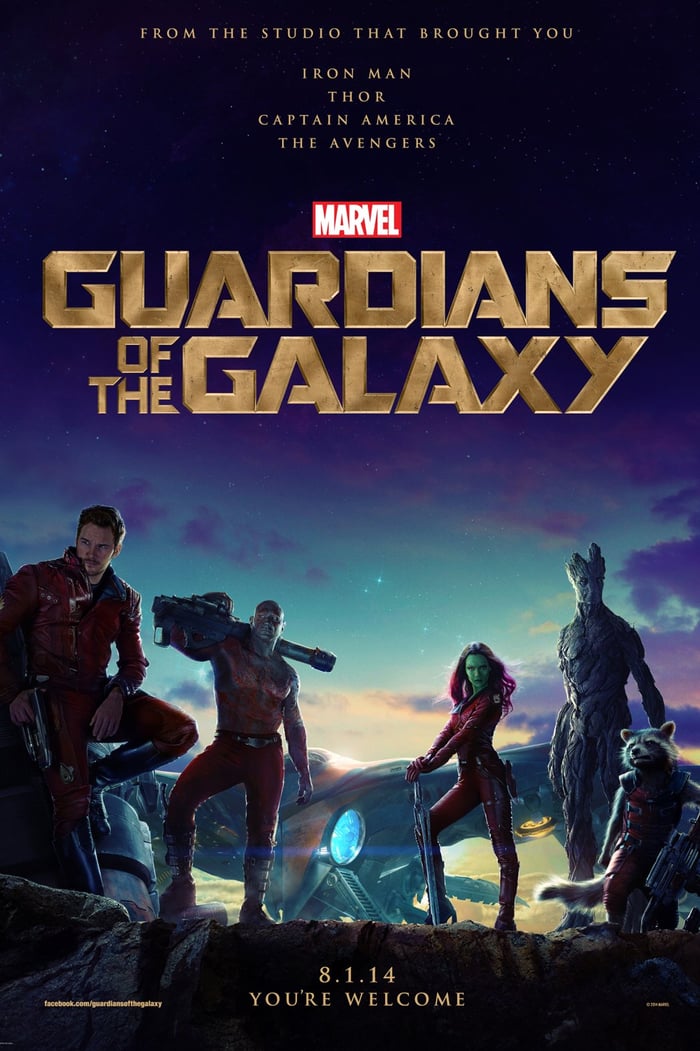 Viral marketing is important for the promotion of any modern-day film, and Guardians has gotten the ball rolling in the best way possible. Although millions will be spent on development and ads, Marvel's track record suggests profitability is very likely.

4. The track record
Within the Marvel cinematic universe, every film has been a box-office success, and none have come close to losing money.

Beginning with Iron Man in 2008, Marvel has been on a legendary run. Only The Incredible Hulk has generated a return on investment less than 100%, and two of the past three Marvel projects -- The Avengers and Iron Man 3 -- are among the highest-grossing films of all-time.

Guardians has the added benefit of being sandwiched between two highly anticipated installments of this universe: Captain America: The Winter Soldier and next year's Avengers: Age of Ultron. As fellow Fool Tim Beyers wrote recently, the movie will probably cost at least $150 million to make, and judging by the chart above, a worldwide box-office take of $265 million (a ROI of 76%) would be a worst-case scenario. Most likely, Guardians will make at least twice its budget.

Critics point to an Aug.1 release as a potential drag on sales -- the month is typically middle-of-the-pack at the box office -- but these fears are overblown. A peek at the top-grossing films of the past 10 Augusts indicates that none were sci-fi epics, and only two (The Other Guys and GI Joe: The Rise of the Cobra) made less than twice their budgets.

5. The star power
Lastly, the star power of Guardians is an underrated strength. The film's "Meet the Guardians" series hypes two of its megastars -- Bradley Cooper and Vin Diesel, who voice Rocket Raccoon and Groot -- though additional marketing may be necessary. The more fans understand Cooper and Diesel have prominent roles in the film, the more mainstream exposure there will be.

Parks and Recreation star Chris Pratt, who will also have a major role in 2015s Jurassic World, could become this decade's Harrison Ford if the cards fall perfectly. At the very least, Pratt's ability to embody Peter Quill can endear him to fans much like what Robert Downey, Jr. has done with Tony Stark.

Zoe Saldana, Djimon Hounsou, Benicio Del Toro, and John C. Reilly round out the cast in a way few Marvel movies have besides The Avengers. Unlike most of the company's solo superhero flicks, Guardians' very nature allows it to feature a diverse group of rising and established actors.

The future
It's a little more than five months until Guardians of the Galaxy hits theaters, and the future is bright. The Marvel tie-in should serve as a nice security blanket for the film, and a rare mix of comedy and science fiction has fans clamoring for more trailers and marketing material.

If history and Marvel's track record are indicators of box-office success, it's reasonable to think Guardians can make at least twice its budget. If it costs $150 million to make, that's a $300 million take, though I wouldn't be surprised if it can at least match the first Captain America, which grossed $370 million.

While the obvious risks -- that Guardians is too goofy for sci-fi fans and too niche for those in the mainstream -- remain, I applaud Marvel's decision to go forward with the film. It's a unique entry into a genre that's been unimaginative in recent years, and if aliens listening to "Hooked on a Feeling" isn't original, I don't know what is.

And now, a Guardians skeptic who thinks Jake got most everything wrong.