Facebook (META -0.86%) is not at its best these days. Usage growth is slowing at the world's largest social network, data privacy concerns are bubbling, and your ex is doing just fine without you. Facebook shares have shed nearly a fifth of their value over the past year, making this the only stock in my current top 10 that has not appreciated year over year.

The former dot-com darling is trying to clean up its act. It announced last week that it has taken down 14 million pieces of terrorist content from its site, with the median time to take action averaging less than two minutes in its latest quarter. It recently blocked 115 accounts that may have been engaged in "coordinated inauthentic behavior" ahead of last week's midterm elections.

Facebook also told its staff on Friday that it's ending forced private arbitration for sexual harassment claims, freeing employees to pursue claims in court. Google announced a similar move a day earlier. Facebook is trying to get it right, but is it too little too late?

Let's go over this week's updated list of 50 top large-cap stocks, kicking things off with the top 10. 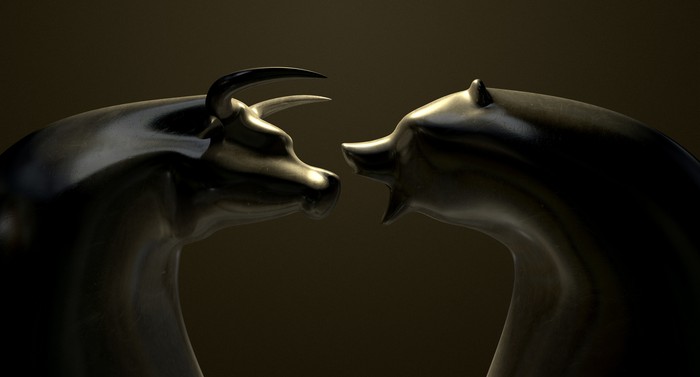 "Senator, we run ads," CEO Mark Zuckerberg famously said in explaining Facebook's business model during his springtime congressional testimony. Keeping its 2.27 billion monthly active users happy, engaged, and growing will go a long way toward keeping the ads coming. The world's leading social network may be the country's sixth-most valuable company based on market cap, but it's on the verge of dropping out of the top 10 here as the stock keeps sliding.

This healthcare provider continues to be the picture of health. Revenue rose 12% in its latest quarter, marking UnitedHealth's third consecutive period of double-digit percentage growth. Adjusted earnings grew even faster, soaring 28% thanks to cost controls and a reduced federal statutory tax rate. UnitedHealth is the lone new entry on the Top 10 this week, having jumped up from No. 15. There are 40 other large caps in this list hanging out in the waiting room.

Some people just aren't patient enough to wait for Black Friday, so Walmart is bumping up the popular shopping holiday. Following the lead of other online retailers, Walmart began offering Black Friday deals through Walmart.com late last week. Walmart remains the world's largest retailer, but it's been making a big push to be a dominant force on the internet, too. Do you know if Facebook is hiring store greeters for its online storefront?

The giant in consumer banking, investment banking, and credit cards continues to benefit from broader trends in the financial-services industry. JPMorgan Chase moves up a notch as its trailing return over the past year has been bumped up to a double-digit percentage gain.

There's a lot of plastic swiping going on, and Visa's leading the way at the checkout line. It posted a strong 11% surge in payment volume in its most recent quarter, and last week we saw BMO Capital analyst James Fotheringham boosting his price target on the shares. He feels that lower taxes and incentives are helping to offset a dip in China volume. He is also boosting his earnings target for the new fiscal year.

The company formerly known as Google may be making online health its next priority. The Wall Street Journal reported that it has tapped the CEO of a tech-savvy hospital system to a new position as the head of Alphabet's healthcare efforts. Alphabet slips a position this week as its stock marches in place. That wasn't the case for the company taking over fourth place. Cue the Warren Buffett fan club.

Big stocks can make big moves, too. Berkshire Hathaway gained 7% last week -- and in the process rises a notch here -- after posting strong quarterly results. Buffett's operating earnings for the third quarter doubled, once again validating the wealth creator's status as the best investor of our generation.

Amazon and Microsoft are neck-and-neck when it comes to market cap. Microsoft has a slight lead, but Amazon's superior gains over the past year have it rising a notch this week. Microsoft isn't walking away empty-handed in this fight with the e-tailing juggernaut, though: CNBC is reporting that Microsoft sealed a five-year deal with Gap (GPS 2.02%) to provide the brick-and-mortar retailer's cloud computing services. The platform, Microsoft Azure, competes with Amazon Web Services for cloud-based hosting. Mr. Softy is fighting hard.

The world's leading online retailer finally settled on where its next headquarters will be, and it was a split decision. Dozens of cities were vying to be the home for Seattle's second corporate hub and the 50,000 new jobs expected to follow. After months of jockeying for position, New York City and the Crystal City region of Arlington, Virginia will split the new headquarters and job openings.

The world's most valuable company by market cap saw its stock slip below $200 early last week, a level that investors haven't seen in more than three months. Apple quickly got its chin back up over the pull-up bar. The iEverything company continues to expand its global reach. It opened its first store in Thailand over the weekend, and now Bangkok shoppers will experience the pocket-draining joy of walking into a stylish store with a shiny Apple logo.

Disney (DIS -3.52%) hit fresh three-year highs after posting better-than-expected financial results. The media giant is closing out fiscal 2018 with double-digit growth in revenue and earnings in its fiscal fourth quarter. Strong theme park trends and another robust period at the box office have been more than enough to offset recent struggles with its consumer products division and the continuing slide in ESPN and Disney Channel viewers.

Disney also announced some of the new shows that will debut on its Disney+ streaming service when the new platform launches in the latter half of next year. It's not easy to stand out in a world where Netflix, Hulu, and Amazon Prime Video are already well established, but Disney is tapping some of its biggest franchises to contribute content that will stream exclusively on Disney+ next year.

Coca-Cola (KO -1.37%) is getting some love on Wall Street. Citi analyst Wendy Nicholson boosted her price target on the beverage giant, arguing that it should trade at a 50% premium to the market. Soft drink consumption trends continue to go the wrong way, but Coca-Cola is finding growth in bottled water, sparkling water, and low-sugar drinks. It also announced recently that it's developing a pair of energy drinks.

We have three new names making the cut this week. Johnson & Johnson, Oracle, and Amgen are giants in their fields. Johnson & Johnson is the company behind Tylenol pain killers, Listerine mouthwash, and Band-Aid bandages. It also has a strong portfolio of pharmaceutical products. Its omission last week was an oversight, as it commands the seventh-largest market cap among U.S.-listed stocks.

Enterprise software giant and biotech bellwether Amgen were bubbling just below the surface a week earlier. They appreciated enough to make the cut this time around.

The three names on the way out are Ecopetrol (NYSE: EC), NVIDIA (NVDA -1.58%), and Lowe's (LOW -4.03%). Ecopetrol was the smallest company on last week's list. It made the cut because it was the only stock with a market cap north of $40 billion that had more than doubled over the past year, and that is no longer the case. NVIDIA and Lowe's saw their trailing gains shrink enough to make room for the new additions to the list.

Target (TGT -5.62%) is Walmart's much smaller "cheap chic" rival, but the discount department store chain is starting to make a resurgence. The stock has soared 45% over the past year.

Things looked pretty bleak a couple of years ago when a data breach exposed the credit card information of tens of millions of Target shoppers. The company has since done a great job of winning back its reputation. (Take notes, Facebook.) Target saw its comparable-store traffic rise 6.4% in its latest quarter, marking the chain's strongest showing on that front in more than a decade.

Target's market cap is near the low end of the $40 billion minimum required to make our Power Rankings, but the retailer's momentum as it heads into the telltale holiday shopping season can't be ignored. The stock's yield of more than 3% also doesn't hurt, especially for shareholders who turn right around and use their quarterly dividend checks to justify shopping sprees. The chain is bubbling just below this week's Top 50 list, but it will earn its signature bull's-eye logo if it comes through with a strong showing during the next few seasonally potent weeks.