The Dow Jones Industrial Average (DJINDICES:^DJI) appears ready to shrug off a disappointing Hump Day performance and push toward another fresh all-time high onThursday. The landmark index is 0.5% higher just after noon EST, and with enough strength it could surpass the peak of 16,576 points set on the very last day of trading in 2013. If the Dow does break through to new highs, investors can largely thank a few standout stocks -- one being Caterpillar (NYSE:CAT), which has been one of the average's best performers with an 8.4% return this year, and which is leading all blue-chip stocks today with a 1.6% gain.

You probably know a few things about Caterpillar, particularly that it's the world's largest manufacturer of construction and mining equipment, which makes its financial performance a useful proxy for American industry. But there are probably more than a few interesting facts about Caterpillar you might have never heard.

Caterpillar was created in 1925 by the merger of two of America's largest tractor manufacturers, which decided that coming together was better than tearing each other apart with lawsuits.

Caterpillar's predecessors were the C.L. Best Tractor Co. and Holt Caterpillar -- Holt being Benjamin Holt, who produced the first workable "crawling," or caterpillar-tracked, tractor beginning in 1909. Holt Manufacturing Co. had produced farm equipment since 1892, with his family's entrepreneurial roots in farm-equipment manufacturing stretching back to the 1870s. The company's name was changed to Holt Caterpillar once Holt developed his first caterpillar-tracked machines.

Holt did not actually invent the caterpillar-track, as records exist of payments he made to Alvin Orlando Lombard to license Lombard's 1901 patent for a continuous track. Continuous-track designs resembling modern uses were first conceived by forgotten inventor Henry T. Stith, a Civil War veteran who first exhibited prototypes as early as 1879. However, Holt did earn the first patent for a caterpillar-tracked tractor, which he would use in later legal battles.

Holt's continuous tracks were vital to the support machinery of World War I,as Allied forces used Holt tractors to tow artillery and supplies. The continuous-track design of Holt's tractors helped inspire the design of the earliest tanks -- you can see Benjamin Holt standing next to a prototype "tank" with his name painted on the side in the accompanying photo, with British Maj. Gen. Ernest Dunlop Swinton to Holt's right honoring the entrepreneur with a salute.

The end of the war left Holt Caterpillar saddled with surplus wartime machinery that it couldn't sell, and this combined with the early 1920s depression to create dire financial straits that eventually compelled Holt and C.L. Best to merge in 1925. As the economy boomed, the newly formed Caterpillar saw its sales double and profits triple between 1926 and 1929. A larger model of Caterpillar tractor sold for roughly $60,000 in real terms by 1929.

Caterpillar has paid a dividend every year since it was created in 1925. The company began trading on the New York Stock Exchange on Dec, 2, 1929, which was one of the worst possible times to step up to the Big Board, as the market had only recently begun to slide into the Great Depression. However, anyone who bought one share of Caterpillar that day for $56.25 would have still wound up with roughly 312 shares today worth $30,545 -- not counting any reinvested dividends (Caterpillar's dividend records are spotty at best prior to 1990).

Caterpillar adopted two of its signature designs during the Great Depression -- it launched the first diesel-engined tractor in 1932 after spending more than $1 million on research and development, a year after unveiling its now-iconic yellow-and-black color scheme.

During the Great Depression, Caterpillar machinery was instrumental in constructing some of America's most notable water-based landmarks, including the Golden Gate Bridge and the Hoover Dam.

During World War II, Caterpillar factories produced roughly 51,000 tractors for the military. After the war, Caterpillar equipment was put to use across the country to construct more than 70,000 miles of the Interstate Highway System.

By the time Caterpillar joined the Dow in 1991, it was already a well-established world leader in heavy industrial vehicle manufacturing. It been one of the index's best performers, and has absolutely trounced the index's own performance since 1991 with a 2,500% total return: 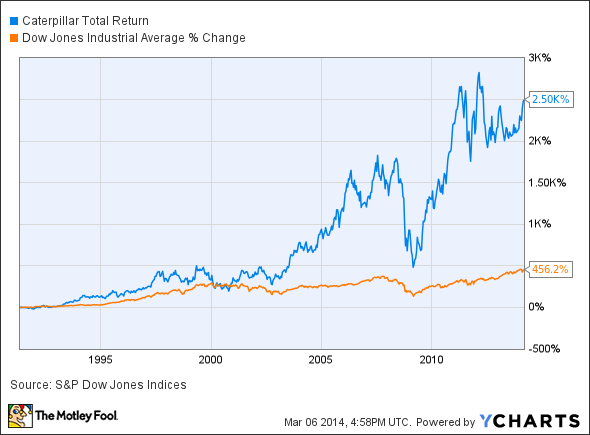