Please ensure Javascript is enabled for purposes of website accessibility
Free Article Join Over 1 Million Premium Members And Get More In-Depth Stock Guidance and Research
By Reuben Gregg Brewer - Mar 6, 2014 at 10:15AM

Would someone please make a final decision on the Keystone XL pipeline!

TransCanada ( TRP -1.23% ) is suffering through what's best described as a political and regulatory nightmare as it tries to build the Keystone XL pipeline. It's making strides, but there are still huge obstacles. And that could have big implications for a key northern oil region.

Unsticking a jam
One of the reasons for the Keystone XL pipeline was to help get oil from Cushing, Oklahoma to the Gulf Coast. Increased domestic oil output left Cushing with too much oil to processes, pushing the price of the region's oil below historical levels. The easy answer to that problem is to move the oil to areas that have more processing capacity.

This is exactly why Enterprise Products Partners ( EPD 0.33% ) and Enbridge ( ENB -0.62% ) reversed the direction of the Seaway pipeline. Demand for capacity is so great that Enterprise and Enbridge are building a "twin" pipeline to, "more than double Seaway's capacity to 850,000 [barrels per day]." That project should wrap up by mid-2014 and add to the top and bottom lines of both companies this year and next.

A good start
The expansion of Enterprise and Enbridge's Seaway, however, will have to compete with the lower half of TransCanada's Keystone XL. That segment of the project has been completed, but only because it didn't cross the border between Canada and the United States. Thus, it didn't need to pass the hurdles of the upper half of the proposed pipeline that would bring Canadian Oil Sands oil into the U.S. market. 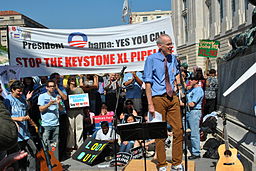 Completing the Cushing-to-Gulf Coast segment is a good start. The success of Seaway suggests that TransCanada will easily be able to get its new project filled to capacity. The first year target is 500,000 barrels per day, with a goal of reaching around 800,000 over time. Look for TransCanada to finally make some real money off of Keystone XL, even as it continues to fight to complete the project.

Oil Sands
The full benefit of Keystone XL, however, will be in connecting the Canadian oil sands to the U.S. Gulf Coast. The problem is at the border, which shifts the approval process to Washington. That's gotten Keystone bogged down in political red tape and turned Keystone XL into something of a soap opera; good news one day, followed by bad news another. In the end, little is getting done.

That's a problem for Canadian oil sands projects like the one being undertaken by Teck Resources ( TECK 0.33% ), Suncor ( SU -1.16% ), and Total ( TTE 1.48% ). This trio has agreed to proceed with the Fort Hills project that has an estimated life of 50 years. While Suncor is a leading player in the oil sands and Total is a giant international oil company, Teck is going out on something of a limb.

That's because Teck mines for coal, copper, and zinc, among other things. Fort Hills will be its first foray into oil. To be fair, the oil sands is a mining operation, so Teck isn't going to have to learn the oil business from the ground up. And Suncor and Total have years of experience. Still, having more outlets for the project's oil can only help. That same dynamic is true for every company mining the oil sands, from Royal Dutch Shell ( RDS.B 0.41% ) to PetroChina ( PTR 1.28% ).

No one is sitting around waiting
The thing is, gaining more access to the large U.S. oil market is ideal, but it isn't the only way for Canada to go. For example, China's appetite for oil has been growing rapidly, a fact that hasn't gone unnoticed by Canada's leaders. If U.S. red tape holds Keystone XL up too long, Canada will find other ways to sell its oil sands riches. That would be bad for TransCanada and bad for the United States.

For now, though, investors should be happy that TransCanada has at least a portion of the Keystone XL project up and running. But you can't stop watching the Keystone XL drama because it isn't over yet. It's an unfolding story that all Canadian oil sands players will be watching closely, since it will have a big impact on how and to whom they sell their oil.

Meanwhile, if you're looking for investments that'll have a big impact...