Please ensure Javascript is enabled for purposes of website accessibility
Free Article Join Over 1 Million Premium Members And Get More In-Depth Stock Guidance and Research
By Neeta Seth - Mar 6, 2014 at 11:00AM

Not all pizza chains are made equal, so which one is worth your money?

There's one thing that differentiates winners from whiners in business -- the ability to grow despite headwinds. Winners brave the headwinds and whiners are quick to blame economic weakness and tepid consumer spending for their poor performance.

The environment for the restaurant industry in 2013 was weak, according to Black Box Intelligence. The year ended on a negative note, with inclement weather in December spoiling the party further.

However, it doesn't take much effort to differentiate the winners from the whiners. The latest results from Domino's Pizza ( DPZ -1.84% ) and Papa John's International ( PZZA -3.40% ) were far better than those of Yum! Brands ( YUM -1.92% ). Domino's came up with good fourth-quarter results, sustaining the momentum of the first three quarters. Can it maintain its winning streak going forward? Let's take a look and find out.

Domino's operation is a hybrid of company- and franchisee-owned outlets. Fourth-quarter comparable-store sales grew 3.7% and 7% for domestic and international operations, respectively. In addition, Domino's had a total of 47 net domestic locations and 273 international stores during the quarter. These new stores and positive comps drove system-wide sales higher, resulting in revenue growth of 5% year over year to $566.5 million. 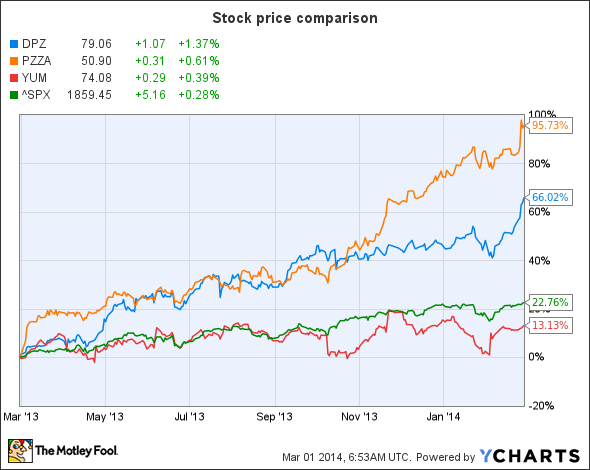 Earnings soared 21.9% year over year to $0.76 per share on the back of positive comps, top-line growth, a lower share count, and margin expansion. The estimate-beating results were received well by the market, and the sustained performance of the company is reflected in the chart above.

Strategies for the future

Going forward, Domino's is expecting to maintain its growth momentum. For the long term, it is expecting comps growth in the range of 2%-4% and 3%-6% for domestic and international operations, respectively. It also expects new store openings in the range of 4%-6%. Its multi-year tie up with Coca-Cola will help Domino's bolster its volumes as a result of joint marketing initiatives.

In addition, Domino's digital ordering is one of its catalysts going forward. Digital ordering is growing at about 5% a year and currently contributes 40% to revenue. In association with Ford, Domino's unveiled the Easy Order app using the SYNC AppLink System. This will be made available to customers beginning mid-2014 and will be one of the growth drivers going forward. It will allow customers to order Domino's from their cars.

Papa John's had a stellar fourth quarter. During the past year, it outperformed its peers and the market by quite a distance as shown in the above chart. The company had year-over-year comps growth of 9% and 7% in its North American and international operations, respectively. This fueled revenue growth of 12.2% year over year. Earnings per share grew a whopping 32% year over year to $0.41. 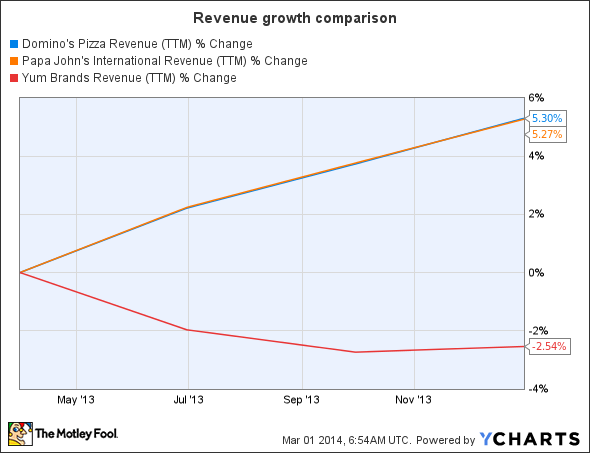 Whereas Domino's and Papa John's have grown their top lines during the last year, despite weakness in the restaurant industry, Yum! is going through troubled times. Its revenue has been declining, and in the very words of management, "2013 was frankly a very humbling year." It has been through a rough phase in China and is trying to deal with one problem after another. But the company hopes to bounce back in 2014.

As if it's woes in China weren't enough, a recent violation of the health code by an employee at Yum! Brands' Pizza Hut chain could well prove to be a public relations nightmare for the company. The long-term ramifications of this are difficult to quantify, but this isn't going to help growth in any form.

Bottom line
Domino's Pizza and Papa John's have grown impressively over the past few years. Both companies have successfully tapped the e-commerce channel, as rapid growth in their digital orders shows. Domino's tie-up with key consumer-goods players such as Coca-Cola and Papa John's and continued strength in online ordering should help these companies grow further; Pizza Hut's troubles could be another growth driver for both.