It was recently announced Brian Moynihan, the CEO of Bank of America (NYSE:BAC), would be receiving a pay raise of 17% to $14 million, yet there are three things he's likely even more excited about.

1. The Warren Buffett endorsement
Many people remember the investment Warren Buffett made through Berkshire Hathaway (NYSE: BRK-A)(NYSE: BRK-B) in which Buffett bought $5 billion of preferred stock of the bank that pay a $300 million, or 6% annual dividend, and also provides him with the warrants to buy 700 million shares of the common stock at any time before September 2021 for just $7.14 a share.

CNBC reported in August "Warren Buffett thanks BofA CEO Moynihan for $5.3 billion profit," but little has been said by Buffett himself about the investment. But in the most recent annual report from Berkshire Hathaway, that all changed as Buffett noted:

We are likely to purchase the shares just before expiration of our option. In the meantime, it is important for you to realize that Bank of America is, in effect, our fifth largest equity investment and one we value highly.

When you consider Buffett affectionately calls his $65 billion top four positions of Wells Fargo, American Express, Coca-Cola, and IBM, his "big four," and the Bank of America position would only need to grow by 15% to equal the size of the IBM stake -- $10.9 billion versus $12.8 billion -- one has to wonder if it will someday become the big five.

When the one of world's greatest investors says the company he runs highly values his business, it undoubtedly makes Moynihan smile.

2. Strong revenue growth
Appropriately, much has been made of the reality Bank of America saw its net income jump from $4.2 billion in 2012 to $11.4 billion in 2013 as it continues to distance itself from the pitfalls that plagued it during the financial crisis and the following years. In addition to the remarkable growth in its bottom line, all four of Bank of America's principal businesses saw revenue rise in 2013:

Often times, much is made of strong sales growth at retailers or firms like Coca-Cola that sell products to consumers, but little is told of the strong growth in the top line results of Bank of America. When you consider the combined revenue of peers JPMorgan Chase, Wells Fargo, and Citigroup actually fell by 1% in 2013, the growth in revenue must be a source of encouragement for Brian Moynihan.

3. Remarkable wealth management results
While many people think of Bank of America as a consumer or a corporate bank, it actually has an enormous Global Wealth & Investment Management business, which also delivered an impressive growth in revenue. Of all the businesses at Bank of America, it delivered the third highest net income in 2013. More impressive was that its income grew by a staggering 32% on the year: 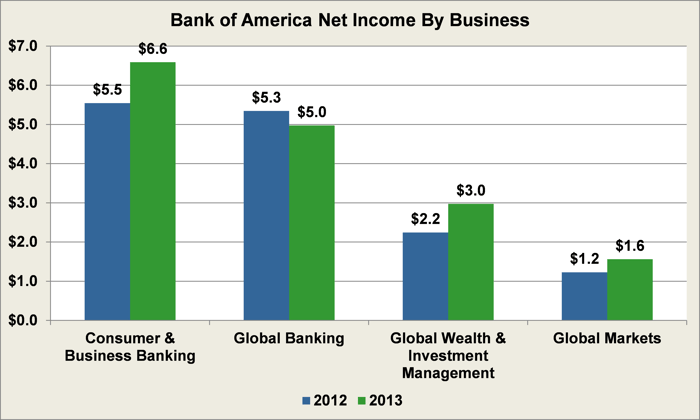 Even still, the business's prospects for future growth look strong. Bank of America grew the total balances it had across all products -- from assets under management, to deposits, loans and others -- provided to its wealth management customers by 10% to $2.4 trillion.

Things are looking for Bank of America

Even more remarkable was the $120 billion growth realized in its assets under management, which rose 18% to more than $820 billion.

When you consider the Wealth & Investment Management business provides a nearly 30% return on average allocated capital -- versus around 20% for its other businesses -- strong investment management result should result in continued growth in returns to shareholders as well.

Bank of America's past troubles have put a lot of frowns and frustrations on the face of Brian Moynihan, but 2013 marked the year where that all began to change.