The employment report is in the spotlight today after the jobs market slowed in the past few months. Originally, it was estimated that the economy added just 75,000 jobs in December and 113,000 in January, well below the average of 180,000 a month of the past few years. The Labor Department today revised those respective numbers up to 84,000 and 129,000 for a combined addition of 25,000 jobs. The government also estimated that the economy added 175,000 jobs in February. 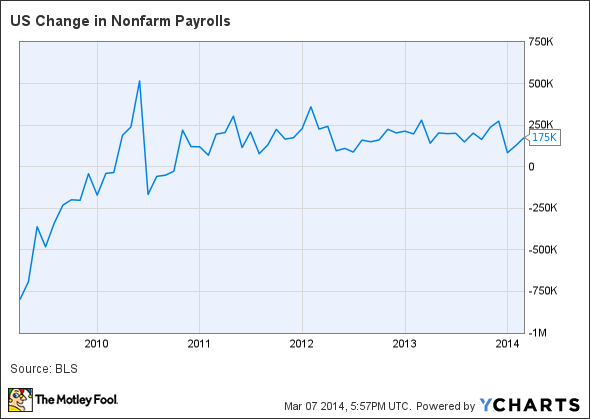 This basically continues the ongoing story of the economy's slow growth and the jobs market's slow improvement. The other important statistic in today's report was that the unemployment rate rose to 6.7% from 6.6%. That occurred as the number of people working or looking for jobs rose an estimated 264,000 in February. 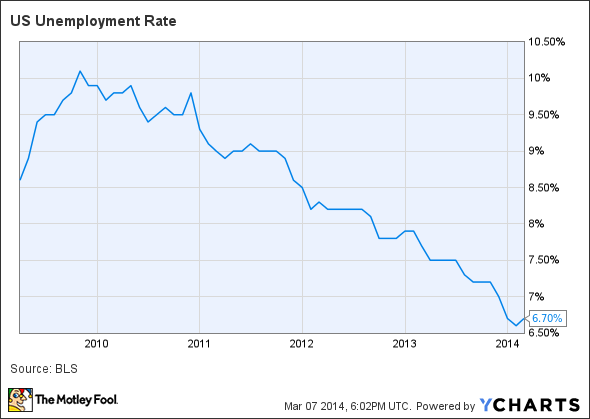 The unemployment rate has been steadily dropping over the past year as the economy adds jobs and baby boomers begin to exit the labor market. This is important for a couple reasons: not only does it mean the economy is strengthening, but the Federal Reserve has previously said a 6.5% unemployment rate is the target level at which it becomes appropriate to begin considering raising interest rates. The Fed has since backed away from the idea that it is only considering the unemployment rate when it comes to potential interest rate hikes, now asserting that it is also assessing other measures of the health of the labor market.

The U.S. stock market has been propped up by the steady influx of cash from the Federal Reserve, which is now dropping as the Fed tapers its asset purchases. The next meeting of the Federal Open Market Committee is scheduled for March 18 and 19. It is likely the central bank will announce another taper of its asset purchases to $55 billion a month.

Foolish takeaway
So what can an investor do in times like this? It's hard to stay sober while everyone around you is drunk on Fed-stimulus punch, telling you to join in on the fun. For me the story remains the same. The economy continues to slowly grow, the jobs market is slowly getting healthier, and the market is still overvalued. I'm holding some extra cash, continuing to educate myself, find great companies, and invest for the long term.