Sears Holdings executives may be losing their perspective and falling victim to groupthink.

Last week, Sears Holdings Corp (SHLDQ) reported yet another dismal quarter. The company reported an adjusted loss per share of $0.96 as domestic comparable-store sales fell 6.4%. While Sears has had lots of ups and downs since hedge fund manager Eddie Lampert combined it with Kmart almost 10 years ago, there's been hardly anything to cheer about recently. 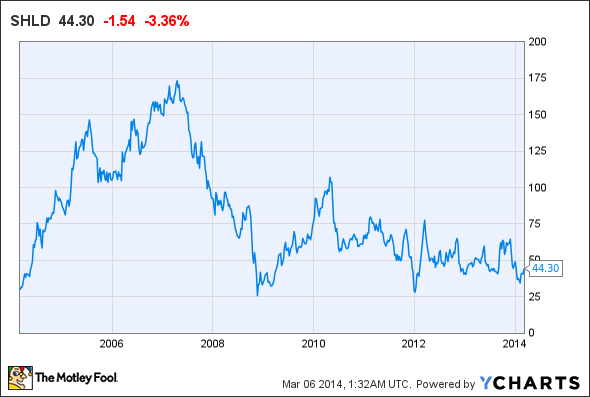 Last January, Lampert -- who has owned a controlling interest in Sears Holdings and served as the company's chairman ever since the Sears-Kmart merger -- finally took over the CEO spot as well. As Lampert has solidified his leadership of the company, Sears has taken a turn for the worse.

Yet Lampert and other Sears Holdings executives continue to tout small "successes." For example, they have repeatedly highlighted how a rising percentage of sales are going to members of the Shop Your Way loyalty program. Sears executives take this as a sign of higher engagement -- even though sales are still falling as quickly as ever.

This suggests that Sears' leaders are becoming out of touch with reality. This could be a symptom of groupthink: a condition in which members of an insulated group that is under pressure prioritize consensus over objective or independent thinking.

Groupthink: The basics
Groupthink is a concept in psychology that has been used to explain many cases of faulty decision-making, from the Bay of Pigs Invasion to the bankruptcy of Swissair. The main idea is that members of a small decision-making group can become insulated from reality, especially when facing a significant external threat.

Groupthink causes members of the group to seek consensus rather than critically evaluating all of the available facts. Evidence that leaders' preferred courses of action are not working (or are not likely to work) gets suppressed, either through self-censorship or due to pressure from other members of the group. Flaws in the group's decisions go unrecognized until they are so obvious that it is too late.

The newest victims of groupthink?
Over the last five years, Sears has implemented a strategy to become what it calls a "Member-Centric Integrated Retailer." This fancy terminology means that Sears wants to turn customers into loyal members of its "Shop Your Way Rewards" program, while giving them the ability to buy products through a variety of channels: in stores, online, from third-party sellers, etc.

However, while Sears executives talk a good game, the company's results have been nothing short of dreadful.

In the company's recent earnings presentation Sears Holdings CEO Eddie Lampert and CFO Rob Schriesheim spent most of their time explaining how -- as bad as the results were -- the company was really making significant progress in its turnaround. (Unlike most public companies, Sears plays a pre-recorded call, which rules out Q&A with analysts, potentially shielding executives from tough questions.)

Sears executives don't seem to recognize how much trouble they are in.

Many of the positives mentioned by Sears management seemed to be more spin than substance. For example:

1. Lampert noted that member engagement had improved, as 72% of sales went to Shop Your Way members last quarter, compared to 58% in Q4 2012. Yet this "increased engagement" did not prevent a massive slide in comparable-store sales and total company sales.

2. Lampert also lauded the company's 10% online sales growth last quarter -- despite the fact that this is much slower than the rate of e-commerce growth nationally.

3. Schriesheim blamed gross margin deterioration on the cost of giving Shop Your Way members points for their purchases in addition to standard promotional markdowns. Yet Sears has not outlined how it will ever be able to wean customers off discounts -- other retailers like J.C. Penney have tried this and failed miserably.

4. Schriesheim also noted that Sears is an "asset-rich enterprise" and highlighted the company's success in generating additional liquidity last year. He didn't mention how Sears has been burning through all the cash it has generated from asset sales, spinoffs, and other financial engineering undertaken in recent years.

Foolish bottom line
In short, Sears executives do not seem to fully grasp the severity of the situation the company faces. Whereas Sears seemed to be stabilizing its performance in early 2013, when Lampert took over, adjusted EBITDA (a measure of earnings that Sears executives prefer) declined by nearly $1 billion last year.

To make matters worse, Lampert -- who has presided over several CEO changes in the last decade, but never chose a retail industry veteran -- has now installed himself in the CEO spot. (Lampert's background is in hedge fund management, not retail.)

While Sears executives talk about transforming the company's business model, they confront two intractable problems. First, they want to turn Sears and Kmart into member-oriented stores, yet neither chain has an image that would entice many people to become loyal fans. Second, while they talk about eventually reducing promotional markdowns, there's no clear strategy for doing so without taking a big hit to sales.

Sears Holdings needs some fresh thinking if it is to avoid squandering whatever shareholder value remains. Instead, since Lampert took full control of the company last year, groupthink has set in, leading to complacency in the face of weakening performance.