Time is slipping away. Are you ready to say goodbye to Windows XP?

More importantly, are shareholders ready for the market reaction when it happens?

Microsoft (NASDAQ:MSFT) will end technical support for the aging operating system exactly one month from today. After a mighty 12-year run, Windows XP joins Windows 2000, Windows 95, and (shudder) Windows ME on the scrap heap of history.

Microsoft released Windows XP just two years after joining the Dow Jones Industrial Average (DJINDICES:^DJI). The operating system is not only a big part of the Microsoft's history and legacy, but it has been the leading platform throughout nearly all of the company's time among well-respected American businesses.

And now it's all over.

"There will be no more security updates or technical support for the Windows XP operating system," Microsoft warns on its website. The same goes for the equally vintage productivity suite, Office 2003. With no more security patches on tap, hackers will have free rein to break into and exploit XP-based computers at will.

A wholesale hack attack would clearly not be in Microsoft's best interests. So the company suggests that all XP users upgrade to a more modern and supported operating system, such as Windows 8.1. Adding a carrot to the stick, Redmond notes that XP users moving up to Windows 8.1 also "benefit from dramatically enhanced security, broad device choice for a mobile workforce, higher user productivity, and a lower total cost of ownership through improved management capabilities."

Mind you, mainstream support for Windows XP ended in 2009. What's ending next month is the lesser range of extended support services. No new features have been added in the last five years, and users have been out of luck on warranty claims since 2009 as well.

And just to make it clear that XP users really should move to the latest and greatest Windows 8.1 version, Microsoft hasn't provided mainstream support for Windows Vista since 2012. Windows 7 only has 10 months left before moving into the bare-bones extended support period.

But the obsolete system still holds a 30% market share among desktop operating systems, according to market research firm NetMarketShare. The preferred migration target? Windows 8.1 is only used on 4.3% of desktop systems today.

Remember the nightmare scenario of rampant hacking into unsupported Windows XP systems? It's coming. Digital misfits are probably saving some dry powder as we speak, getting ready for an unhindered assault once the security fence goes down. Third-party security firms may be able to help for a while, but they don't have access to Microsoft's source code and cannot be expected to plug every gap.

Things will get ugly in April. Microsoft is failing an important litmus test of Windows users' loyalty. In spite of XP's strengths, Microsoft has underperformed the Dow since the greybeard system was released -- and the market performance gap only grew wider in recent years as a suitable heir to the Windows throne never materialized. 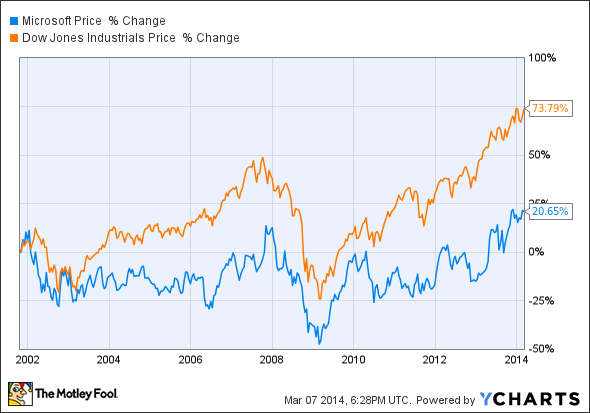 When nearly one-third of all Window's users are left exposed to a firestorm of security attacks in April, I would hate to own Microsoft shares as the market takes in another PR disaster.