From the NBA's sleeved jerseys to the ongoing uniform switcheroo in the NFL, athletic apparel redesigns are common. So what did Nike (NYSE:NKE) just do that has the sports world buzzing?

A new spin on U.S. Soccer
Despite the company's decision to renew its long-term sponsorship with U.S. Soccer last year, its latest move was still a surprise. On Monday, Nike unveiled a new, all-white design that will be worn by the men's and women's World Cup teams this summer.

As Bleacher Report reports, a segment of fans are "underwhelmed" with the design because of its similarity to golf and tennis gear. Although it's by no means comprehensive, recent data from Sentiment140, which tracks social media sentiment, indicates 80% of Twitter users have reacted negatively to the jerseys.

In a press release, Nike says they're "classic ... simple and iconic," but it's obvious some critics prefer a design closer to what the team wore in 2006 and 2010. These versions featured shoulder sashes, modern font, and did not have collars.

Don't forget about the Bucs
That's not the only change Nike revealed this week. Following in the footsteps of the Seattle Seahawks, Miami Dolphins, Minnesota Vikings, and Jacksonville Jaguars, the Tampa Bay Buccaneers' jerseys will look very different next NFL season. 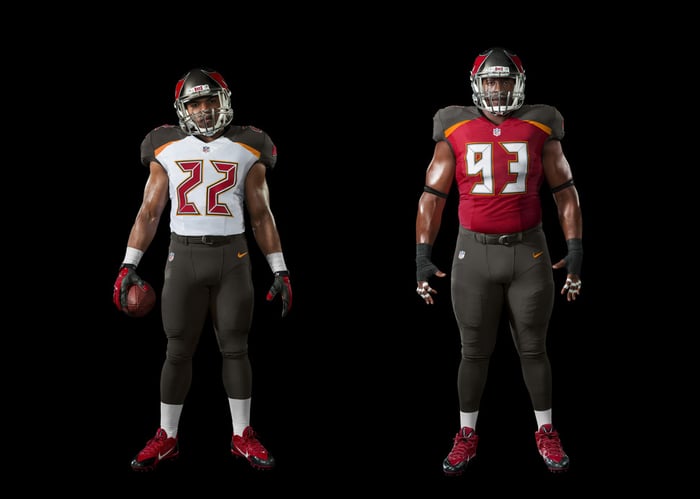 Despite flashy graphics (and jersey numbers that look like they were taken off a digital watch), the media was not impressed. Deadspin, for example, compared the design to something an "indoor football" team might wear, while Business Insider called it "ugly." Social media sentiment mostly echoed these complaints, which begs the question: Why did Nike make the changes in the first place?

The business behind both moves
The company's U.S. Soccer sponsorship costs more than $12 million a year. While Nike doesn't share how much revenue it generates from individual team jersey sales, its latest quarterly earnings call explained the purpose of the redesign: to highlight its Dri-FIT and Pro brands. According to a Seeking Alpha transcript, Nike CEO Mark Parker says the company is undergoing an "unprecedented level of product innovation ... for the World Cup."

This past week, the company also released new kits for Portugal, Turkey, Poland, Greece, France, and Brazil -- all feature the latest Nike Dri-FIT and Pro technology. Much like the Winter Olympics, World Cup sponsors use the event's enormity to highlight their newest products. In Nike's case, a jersey redesign simply makes it easier to do so.

The NFL is a different animal. Ever since Nike began its five-year, $1.1 billion sponsorship with the league two years ago, pundits have wondered why the deal is nine times more expensive than what Reebok previously paid. If it wasn't clear before, the reason is even more obvious now: Nike aims to radically change the face of NFL apparel. After the Cleveland Browns' expected transition to new jerseys next year, a total of six teams will have upgraded their gear since the start of Nike's deal.

The bottom line
Although it's tempting to think Nike made these decisions to reinvigorate merchandise sales, it's not that simple. At the World Cup, a reasonable assumption is that it wants to shine the global spotlight on its Dri-FIT and Pro brands.

The NFL, by comparison, is reaping the rewards of Nike's enormous apparel sponsorship, and if the new-look Buccaneers are any indication, future uniform changes should be far from subtle.

While backlash from the media and fans is never fun, let the Seahawks serve as a lesson. After Seattle's Nike jerseys were introduced in 2012, they were widely mocked. By the next year, though, they were one of the league's top-sellers, and that was before the team won the Super Bowl.