On March 3, 2014, management at Darden Restaurants (NYSE:DRI) released a presentation which provided the details behind the company's planned spin-off of its Red Lobster operations. For months, activist investors like Barington Capital Group have pressed Darden to get rid of Red Lobster and Olive Garden.

After Darden told investors that it would keep Olive Garden while spinning off Red Lobster, Starboard Value, which has a 5.5% stake in Darden, pressed management to put the divestiture plan to a vote. Barington, which also believes that the company isn't maximizing its potential, backed Starboard's suggestion. With the release of this presentation Darden laid out its rationale for its plan and effectively told these activist investors to deal with it. Here are three of the selling points put out by the company:

Darden has effectively maximized shareholder value in relation to peers
Although Darden has reported bad and worsening comparable-store sales figures from Red Lobster and Olive Garden, its long-term performance has been strong, especially in comparison with its peers. 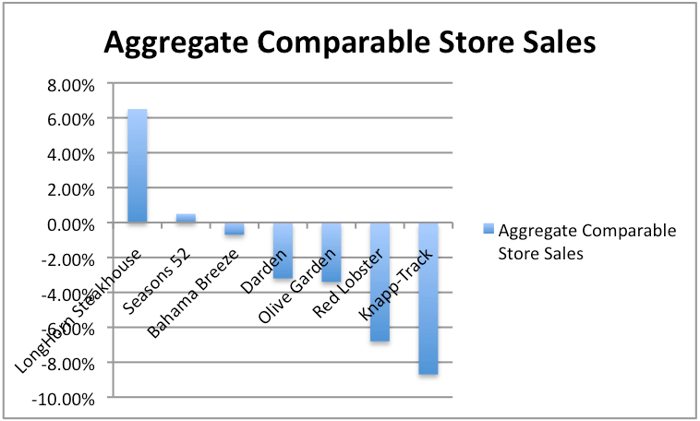 As we can see, Darden has posted, in aggregate, a comparable-store sales decline of 3.2% from the start of its 2009 fiscal year through the second quarter of its 2014 fiscal year. At first glance, the company's performance looks anything but good, but it did do much better than its rivals. The Knapp-Track, which measures the comparable-store sales of casual-dining restaurants, shows a cumulative loss of 8.7% (excluding Darden's performance) over the same time-frame. This suggests that, while the company isn't doing so hot it's done a better job of preserving value than its peers did.

The following chart also shows how well Darden has fared when pitted against some of its larger competitors: 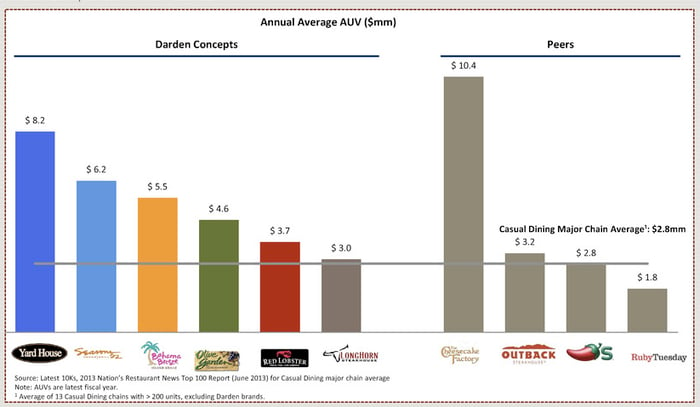 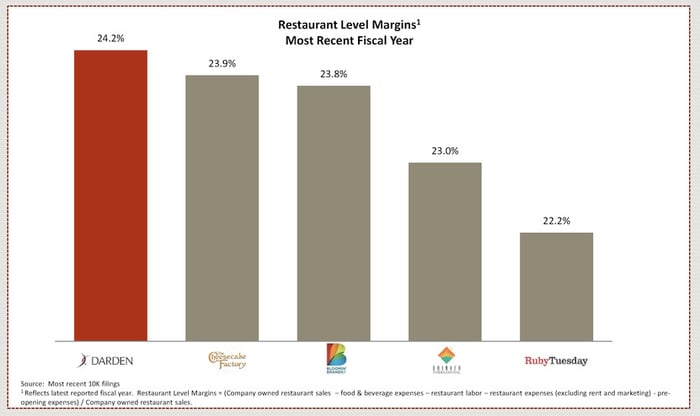 Darden's exploring menu options and revamping its locations
Aside from delivering relatively good results, Darden hopes to change its current business model. Instead of spinning off its Olive Garden chain along with its Red Lobster chain, it plans to retain Olive Garden and change both its menu and physical appearance.

The company's new menu includes crab-topped chicken, salmon bruschetta, a smashed chicken meatball sandwich, and pappardelle pescatore. To top things off, the company's Olive Garden chains will have a more-modern look. Personally, I think it looks like the chain's interior will look less Italian, and it will fall in the footsteps of Chipotle Mexican Grill.

Debt could be a major concern under another plan and other plans are sub-optimal!
Management at Darden is also afraid that any alternative division method would expose investors to too much risk and result in credit concerns. In its presentation, management claims that a good portion of its debt would have to be placed on the surviving company if Olive Garden and Red Lobster were spun off together.

If LongHorn Steakhouse was also included in the transaction, the surviving company (which would consist of only its Specialty Restaurant Group) would likely have to assume all of the business's debt. At nearly $2.5 billion as of its most recent quarter, the company's debt load would probably depress the share price of the surviving Darden company considerably.

Investors also suggested spinning off the company's real estate assets in the form of a REIT, or real estate investment trust. The company would receive tax benefits and, in turn, gain higher margins so it could deliver a better return to its shareholders. The company maintains, however, that since its real estate is best suited for restaurants this plan would result in more concentration than investors would like. This, in turn, would likely imply a depressed share price for the business.

Foolish takeaway
Based on the evidence provided in Darden's presentation, it looks logical that management plans to spin-off just Red Lobster. However, the Foolish investor should keep in mind that the company's findings are based on loose assumptions and strongly rely on its past performance. In truth, any of these factors can change going forward.

For this reason alone, shareholders should not automatically assume that Darden's decision to spin off Red Lobster by itself is optimal. However, it is safe to assume that management effectively told shareholders it will do what it considers best and that shareholders can either trust their judgement or talk with their feet.