It's no surprise 2014 has seen plenty of rumors surrounding the details of Apple's (NASDAQ:AAPL) next iPhone lineup, but this week brought some particularly interesting display-related news.

First, on Monday, a member of China's WeiPhone forum posted images of a purported iPhone 6 front panel featuring a new bezel free design -- indicating, in other words, Apple may be tweaking the new iPhone's display to extend all the way to either side of the device.

The images have since been removed by WeiPhone, but French news site NowhereElse.fr were nice enough to grab a copy:

Of course, we can't tell whether that  image is real just yet -- it's possible someone could have altered the panel's appearance -- but it would lend credence to a February Korea Herald report stating that Apple was working on a new device with bezel-less screen.

In addition, this is also a perfect way for Apple to incorporate larger displays without significantly increasing the overall size of each device.

Baby steps
While it's definitely a slick physical upgrade for Apple to remove the borders at the edge of the iPhone displays, I don't think the folks in Cupertino intend to stop there.

To be sure, on Tuesday, the ever-watchful eyes at Patently Apple noticed that Apple was just granted a patent for an iPhone with a wraparound display. 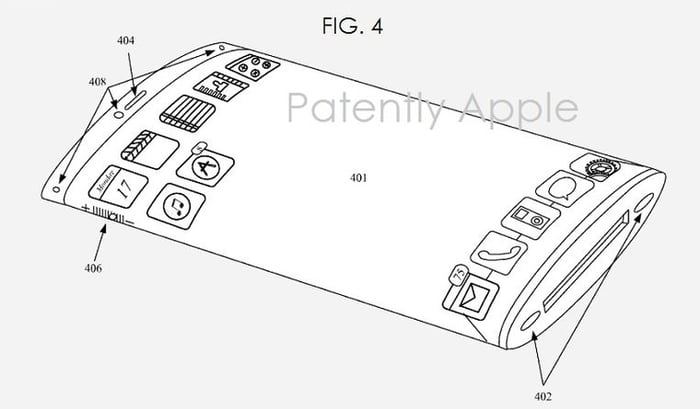 And make no mistake -- that could be great news for shareholders of Universal Display Corp. (NASDAQ:OLED), whose flagship OLED technology has already enabled curved, flexible displays in both smartphones and televisions from Samsung and LG.

So why didn't Universal Display shareholders explode with excitement following the news?

For one, keep in mind Apple already has droves of patents, and there's no guarantee it'll ever create tangible products from the innovations they contain. What's more, if the preceding image looks familiar, it's because the market first noted that Apple applied for this patent last March. This week's report, then, is simply confirmation that Apple's application has finally translated to an actual patent.

There is an upside: If Apple really is planning to invent a new iPhone with a wraparound OLED display, its newest patent paves the way for it to do so without fearing legal copycats. If that happens -- and regardless of how the market reacts to Apple's form factor change -- Universal Display shareholders would stand to reap huge rewards.

Don't hold your breath yet
On that note, we shouldn't expect to see iPhones with wraparound displays rolling off the line anytime soon. If the release of such a product was anywhere near, it would be difficult for Apple to hide preparations for mass production with such novel hardware. To be sure, and much in the same way earlier reports unveiled a probable late-2014 launch for a small-screen OLED iWatch, the launch of an even larger, already popular device would almost certainly set off alarm bells from supply-chain speculators.

In any case, you can be sure we'll keep our eyes peeled for any updates going forward.