Please ensure Javascript is enabled for purposes of website accessibility
Free Article Join Over 1 Million Premium Members And Get More In-Depth Stock Guidance and Research
By Brian Stoffel - Mar 8, 2014 at 11:00AM

Three reasons this is looking more like a value trap.

The Fresh Market, (NASDAQ: TFM) reported earnings yesterday, and they don't offer up a whole lot of hope for investors who have ridden shares down 45% since hitting all-time highs in late 2012.

Even if the stock looks cheap compared to fellow natural/organic grocers, there are three big red flags investors need to be aware of moving forward.

While The Fresh Market has been around for more than three decades, it only recently began expanding beyond its core markets of North Carolina. But the company announced yesterday that it would be closing four of its stores by the end of the month: three in Sacramento and one in Houston.

This isn't a good sign for the company. Take a look at when the stores were opened and what the median household income was in each neighborhood, and there's really no excuse why The Fresh Market wasn't able to capitalize.

Sources: Company release, Census Bureau. Range for Houston specific to four locations being closed was not immediately given.

What's worse, these seem to show that the company has done a poor job of researching its potential markets before moving in. The company admitted as much in its release, saying it has "deployed new analytics and forecasting methods designed to improve the site selection process and enhance the accuracy of sales forecasting." 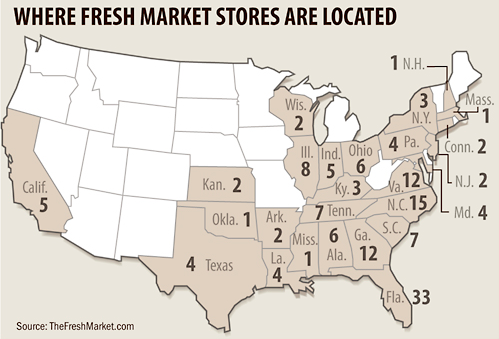 The company's decision to move out of certain California and Texas locations wasn't isolated, either. The Fresh Market announced that it would now be focused on expanding in established markets instead of expanding into new ones. Specifically, the company said that its primary focus would be on locations located east of the Mississippi River.

What does this really mean? In my opinion, it's that The Fresh Market is getting beaten out by larger brands like Whole Foods Market ( WFM ), and has little chance of moving into territory that smaller niche players like Sprouts Farmers Market ( SFM -0.75% ) and Natural Grocers ( NGVC -1.87% ) already occupy. 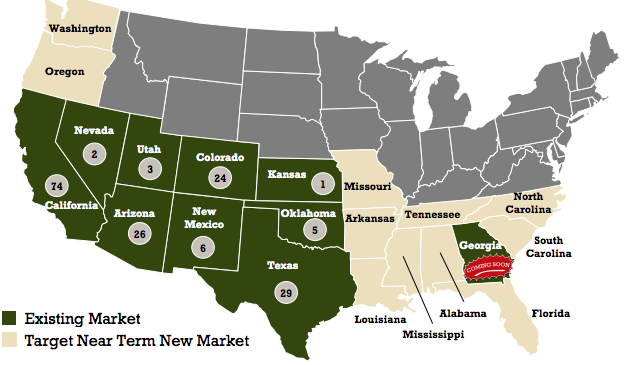 The first map represents Sprouts, the second, Natural Grocers. While Whole Foods is a nationwide chain, a look at the spread of locations of the three smaller players shows that The Fresh Market is largely giving up the West.

The deathblow
In the grocery industry -- and retail in general -- there is one metric that stands above the rest in importance: same-store sales. Anyone can grow their revenue by opening up new locations. But it takes a store that has truly struck a chord with its customers to consistently grow sales in existing locations.

Over the last quarter, Whole Foods, Natural Grocers, and Sprouts grew same-store sales by 5.4%, 10.6%, and 13.8%, respectively. And Whole Foods' lower number is largely due to its larger base of stores that have hit their market saturation point.

So where does The Fresh Market come in? It grew sales last week by 3.1%. Even worse, it is predicting same-store sales between 1.5% and 3.5% in the coming year. For an industry that's as hot as this one is, those numbers are downright abysmal.

A final verdict
Tie in those sales numbers with the fact that the company thinks it can somehow do better in already-established markets and you've got a recipe for underperformance. The Fresh Market might trade hands for a lower multiple than its peers, but that's for good reason, and I wouldn't go anywhere near the stock right now.