Just the other day the latest annual report from Berkshire Hathaway was released, and one more number proves Warren Buffett's resounding success

That's what they try to tell you. Don't listen. He is still one of the best investors of all time.

Over the weekend Berkshire Hathaway ( BRK.A -0.56% )( BRK.B -0.44% ) released its annual report which includes the valuable letter from Warren Buffett. It is full of facts, figures, wisdom, quotes, and quips, but there was one number that stood above all the rest.

The trend ends
Last year, Buffett revealed in his annual letter there had never been a five-year stretch in which Berkshire Hathaway failed to beat the S&P 500 when comparing its book value growth to the appreciation of the stock market. Yet he cautioned; "the S&P has now had gains in each of the last four years, outpacing us over that period. If the market continues to advance in 2013, our streak of five year wins will end."

Although Berkshire Hathaway posted a staggering 18.2% growth in its book value per share in 2013, it was far surpassed by the 32.4% growth seen by the S&P 500 last year. This gap of 14.2% was the fourth largest difference in the 49 year history of Berkshire Hathaway: 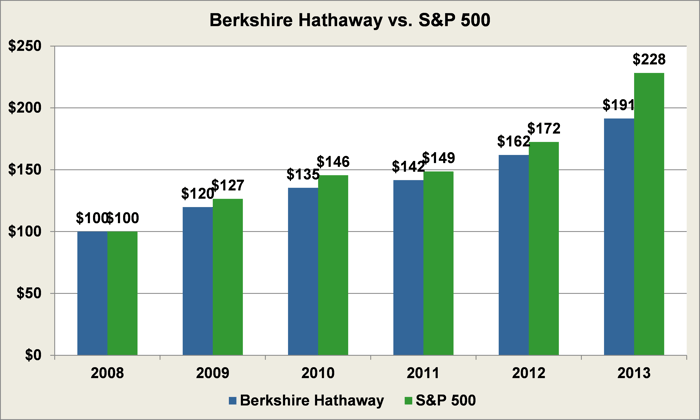 This difference of 37% on the initial investment is a staggering discrepancy between the historical performance of Berkshire Hathaway relative to the S&P 500 when gauging the five year returns: 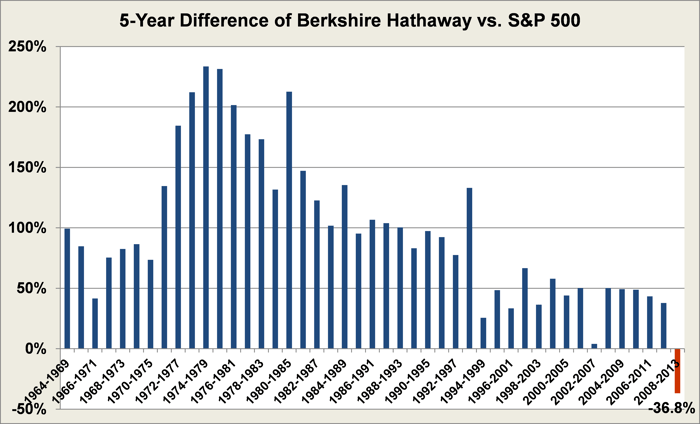 While it is easy to think this now indicates Buffett has lost it and should no longer be trusted for investment advice, it turns just the opposite is true.

By comparison, if the same $19 was invested in the S&P 500, the gain of 32% would've represented a growth of just a little over $450 on an original $19 investment made in 1964. This difference displays the power of compound interest, but it also shows how remarkable Warren Buffett's performance truly is.

Warren Buffett has long extolled the values of buy-and-hold investing, and it can be clearly seen through this example that true investment gains are not made over the course of a few weeks or months, but instead years. That is why Buffett's success shouldn't be evaluated over the relative return of his company over just one or even five years, but instead over decades of investing.

In his 1988 latter to shareholders Buffett said, "when we own portions of outstanding businesses with outstanding managements, our favorite holding period is forever," which reminds us all investing for the long-term is truly when astounding gains can be made.