The world's hottest automaker has wowed Wall Street for a year, but can Tesla's (TSLA) fundamentals ever catch up to its white-hot stock?

Investors love stocks that consistently beat the Street without getting ahead of their fundamentals and risking a meltdown. The best stocks offer sustainable market-beating gains, with robust and improving financial metrics that support strong price growth. Does Tesla Motors Inc (TSLA 0.91%) fit the bill? Let's look at what its recent results tell us about its potential for future gains.

What we're looking for
The graphs you're about to see tell Tesla's story, and we'll be grading the quality of that story in several ways:

What the numbers tell you
Now, let's look at Tesla's key statistics: 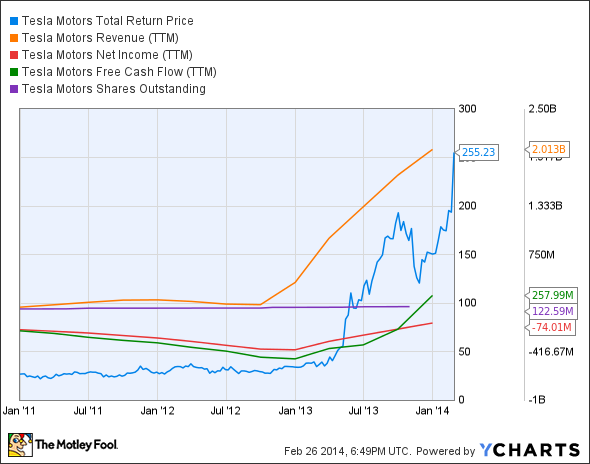 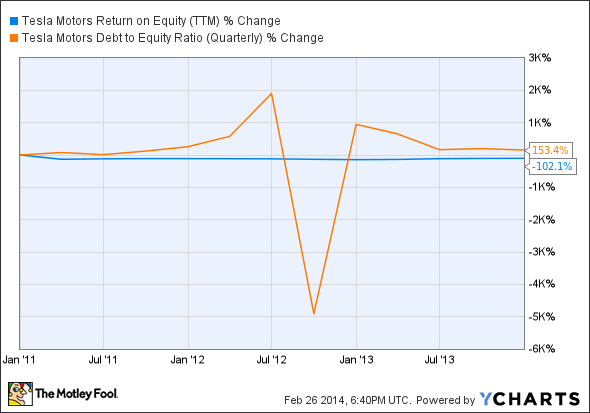 How we got here and where we're going
Tesla stomped on the accelerator out of the starting gate, but its battery packs ran out of juice as we progressed through our analysis, finishing with a respectable (but not amazing) four out of seven possible passing grades. Over the past few quarters, Tesla's revenue and earnings have skyrocketed because of high demand for its electric vehicles worldwide. However, the company's stock growth has far outpaced the gains in its net income, which remains in negative territory on a GAAP basis despite positive adjusted results. But will Tesla keep outperforming on the back of rising demand for electric vehicles in the future? Let's dig a little deeper to see.

Tesla's latest quarter produced another big pop in its share price, as the company reported market-topping revenue and earnings per share thanks to record deliveries of roughly 6,900 Model S vehicles, a delivery rate which is expected to continue rising over the next few years. The company now expects to complete 35,000 deliveries of the Model S sedan in 2014, which will necessitate an increase in production to 1,000 cars per week from the latest report of 600 cars per week.

Fool contributor Jeremy Bowman notes that Tesla continues to make significant investments in its supercharging station infrastructure and service centers, and also continues to pursue expansion into global automobile markets. Tesla's Model S is scheduled to launch in China this spring, and its Beijing store is already its largest and most active retail location. Tesla's foray into emerging markets should accelerate revenue growth, as the Chinese high-end auto market is expected to grow by 12% per year until 2020 -- provided, of course, that Tesla can ramp up production at sufficient rates. Tesla plans to sell the Model S and the upcoming Model X for a lower premium in China as compared to other automakers, which could make Tesla's electric cars eligible for subsidies from the Chinese government. As a result, Tesla hopes to quadruple annual sales to 100,000 electric vehicles by the end of 2016.

Fool contributor Adam Weinberg points out that Tesla's Model X should see more demand than the Model S has already enjoyed. To satisfy this demand, Tesla Motors announced the construction of the world's largest battery "Gigafactory," which will lay the groundwork for its more affordable Generation III vehicle, with a base price of $30,000 to $35,000.The company could also sell lithium-ion batteries from the Gigafactory to solar-panel companies such as Musk's own SolarCity (SCTY.DL) to create fully off-the-grid renewable solutions.

Morgan Stanley's analyst Adam Jonas recently doubled his price target to $320, citing opportunities from the Gigafactory's low-cost battery cells and from the launch of the Model X. However, Tesla has already delayed the launch of the Model X to the spring of 2015, which could revenue growth over the next two years due to consumer plans for luxury-car purchases typically peaking in the winter months. Fool contributor Beth McKenna notes that Tesla now plans to build out its Supercharger network in Germany, Europe's largest auto market, by the end this year. According to Tesla, combined sales in Asian and European markets will be almost twice that of North American sales.

Putting the pieces together
Today, Tesla Motors has some of the qualities that make up a great stock, but no stock is truly perfect. Digging deeper can help you uncover the answers you need to make a great buy -- or to stay away from a stock that's going nowhere.

Alex Planes has no position in any stocks mentioned. The Motley Fool recommends and owns shares of SolarCity and Tesla Motors. We Fools don't all hold the same opinions, but we all believe that considering a diverse range of insights makes us better investors. The Motley Fool has a disclosure policy.