On this day five years ago, the Dow Jones Industrials (DJINDICES:^DJI) hit their lowest level of the bear market, setting the stage for an explosive bull-market move that saved many investors from financial ruin. Yet even though the Dow has climbed 150% over that time span, its longer-term returns have been far less impressive when you consider the year and a half of dramatic losses that preceded the March 2009 lows. Measuring from late 2007, you'll find three surprising Dow stocks that have actually lost ground even after impressive recoveries from their bear-market lows: Goldman Sachs (NYSE:GS), Cisco Systems (NASDAQ:CSCO), and General Electric (NYSE:GE). 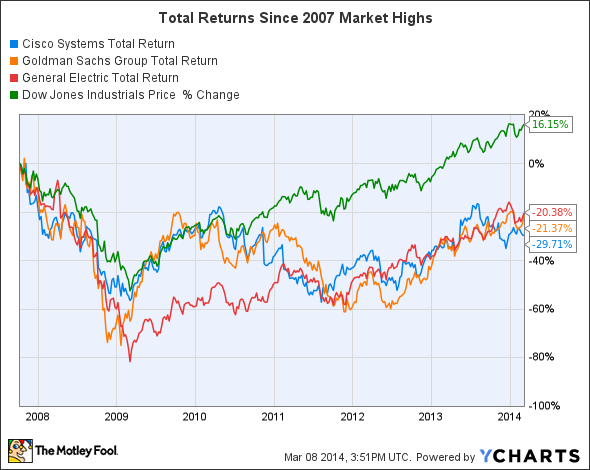 The one thing these three stocks have in common is that they've lost ground over the past six-and-a-half years even as the Dow has climbed. But the reasons behind each of their share-price trajectories vary, despite some superficial similarities.

General Electric (GE) was the stock most deeply hurt by the financial crisis, with its GE Capital division bringing the rest of the conglomerate to its knees. Even after Warren Buffett announced an injection of capital into General Electric in late 2008, GE stock continued to fall into the beginning of 2009, eventually losing more than 80% of its value from its late 2007 levels before bottoming out.

Since then, General Electric has done a masterful job of revamping its business, moving away from its GE Capital division and instead refocusing on its industrial roots. Its energy division has become a key part of its overall growth strategy, and strength from the commercial aviation industry has also helped General Electric's aerospace business. By doing so, the stock has slowly clawed back most of its losses with inexorable, steady performance over the past five years. Yet even with the stock having nearly quadrupled from its worst levels, the fact that General Electric had dug itself so deep a hole means that it has still lost 20% of its value since late 2007.

Meanwhile, Goldman Sachs (GS) had a different experience from General Electric from a share-price perspective. Even though the bank was equally embroiled in the financial crisis, Goldman shares rebounded sharply in the months following the market bottom, regaining the majority of its worst losses from late 2008 and early 2009. But after topping out in late 2009, Goldman shares started to fall again, with renewed worries about the banking sector and seemingly endless bouts of regulatory and legal actions pounding the stock. Goldman has done a good job of bouncing back since mid-2012, as bank balance sheets improved. But even as other banking peers have recovered all of their lost ground from the financial crisis, Goldman still languishes more than 20% below its late 2007 levels.

Cisco Systems (CSCO) isn't a financial stock, and so its losses in 2008 and early 2009 weren't as extreme as General Electric's and Goldman's. But Cisco has faced company-specific challenges as the technology industry has become increasingly competitive, especially among the upper ranks of companies in the sector. Not only has Cisco had to deal with rivals aiming squarely at its former dominance of the networking space, but it has also had to look for new growth opportunities in other niches of the tech sector in order to bolster its overall results. Cisco's success on those dual fronts has been mixed at best, with recent revenue declines showing just how difficult it has been for the networking giant to fight against its tech peers and maintain its place among the leaders of the industry.

It's tempting on this fifth anniversary of the bull market only to look at the best of times for the stocks in the Dow Jones Industrials. But to give yourself a full picture of their true performance for long-term investors, including the terrible period from the 2007 highs to the 2009 lows is essential in judging the Dow's stocks fairly.