Last week the number of drilling rigs targeting oil in the U.S. surged to a record level according to a report on Bloomberg. The rig count jumped by 13 to 1,443 rigs, which is the highest total since the industry began keeping track of separate rig counts in 1987. That's a record that should continue to see new highs as the industry continues to find new sources of recoverable oil in the U.S.

Just getting started
The area behind last week's surge is the Permian Basin in west Texas. While that legacy oil basin has been producing since 1921, its best days are likely to still lie ahead. This is because producers like Pioneer Natural Resources (NYSE:PXD) and Concho Resources (NYSE:CXO) are just beginning to accelerate drilling programs to unlock additional sources of oil using horizontal drilling. Because of this trend the rig count in the region increased by 10 to 265, which is the highest total since 2011.

Pioneer Natural Resources is one of the leaders in developing the Spraberry/Wolfcamp formations in the Permian Basin. The company is already the second largest oil producer in Texas, but it's just getting started on drilling horizontally into these two promising formations. Pioneer Natural Resources currently sees about 20,500 future horizontal locations in this region, which is a dramatic increase from the 7,000 mostly vertical wells the company has drilled so far. One of the reasons the rig count in the region should keep growing is because Pioneer Natural Resoruces is expected to increase its horizontal rig count from 5 at the end of last year to 16 by the end of this quarter in the northern portion of its acreage as it starts ramping up its horizontal drilling program.

Concho Resources likewise is just beginning to accelerate its horizontal development program in the Permian Basin. It has identified over 22,000 horizontal drilling locations, which is nearly twice as many locations as it thought it had at the end of 2012. Outstanding well results combined with downspacing continues to open up additional well locations. Because of this Concho Resources is confident that it can double its production by the end of 2016.

Core growth
While the Permian Basin is expected to produce a surging production growth at both Pioneer Natural Resources and Concho Resources, it's also fueling core growth with producers like Devon Energy (NYSE:DVN) and Apache (NASDAQ:APA). Both companies are well diversified outside of Texas, however, the Permian Basin is a big part of future growth plans at both companies.

Devon Energy, for example, sees its strong Permian Basin position forming the bedrock of its U.S. oil growth platform. Production in the Permian has already doubled since 2011 and should continue growing in the future. It's part of the company's three pronged oil growth strategy that includes the Eagle Ford Shale and the Canadian oil sands and is expected to fuel a 20% compound annual oil production growth rate for Devon.

Apache also sees the Permian Basin as being one of the areas that fuels future growth. The company is now the top driller in the Permian Basin as it has grown its rig count from 6 to 39 since 2010. What's so appealing about this basin is that there are multiple oil bearing targets. As the following slide shows, Apache is already developing several targets and it sees a number of additional targets that should fuel growth for a long time. 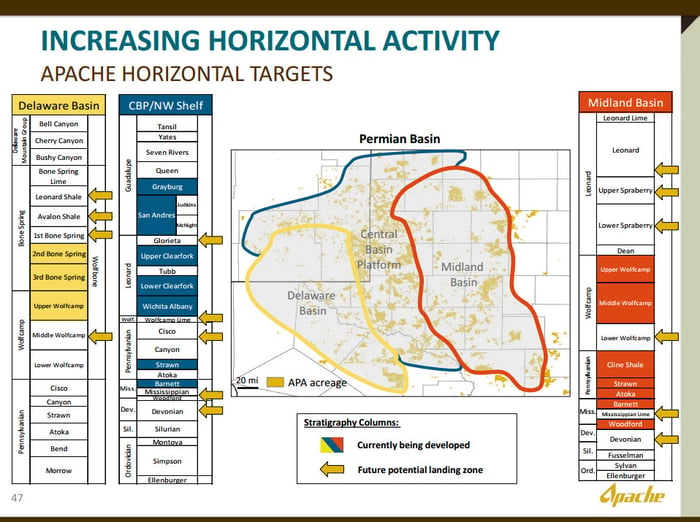 Apache sees significant resource potential from its 1.7 million net acre position in the basin. The company estimates that its net resource potential is 4.8 billion barrels of oil equivalent, which is a billion barrels of oil equivalent more than it thought was there just last year. When combining the Permian Basin with the company's strong position in the Mid Continent and Gulf of Mexico, it's expected to fuel 12%-16% compound annual production growth in North America through 2016.

Investor takeaway
The Permian Basin is filled with untapped oil potential making it an important growth area for energy companies. Pioneer Natural Resources and Concho Resources are among the most levered to the basin while producers like Apache and Devon Energy offer growth beyond the Permian. Because of that investors have a lot of options to make money in the years ahead.