A Foolish look at the top performing healthcare stock in 2014.

One of the biggest stories in the biotech space has undoubtedly been Intercept Pharmaceuticals' ( ICPT -8.28% ) sudden, explosive rise following a mid-stage trial for its experimental Non-Alcoholic Steatohepatitis (NASH) therapy called obeticholic acid (OCA). As a refresher, OCA showed such a strong clinical benefit to patients receiving the drug, compared to a placebo, that the trial was stopped early after an interim analysis last January. Basically, it would have been unethical to continue dosing patients with a placebo when the therapy was clearly working.

On the back of this news, Intercept shares shot up over 500% in two days, giving the stock an astronomical 900% gain over the past twelve months alone. So, it's reasonable to wonder if Intercept can continue this upward trend, or if it's time to take profits. 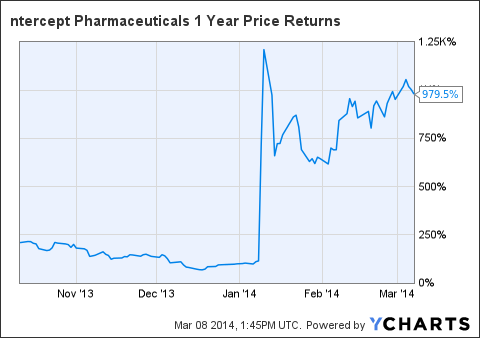 NASH & OCA
Recent studies estimate that more than 30 million adults in the U.S. are afflicted with NASH, and there is no approved treatment. Within this subpopulation, 21% to 26% are projected to develop liver cirrhosis, many of whom will eventually require transplants. NASH patients are also much more likely to develop Type II diabetes and chronic weight problems. So, it's safe to say that OCA is targeting a large unmet medical need.

OCA is a close analog to a natural bile acid CDCA that is a potent farnesoid X receptor, or FXR, agonist. Put simply, Intercept's researchers have chemically modified CDCA by adding a 6-α ethyl substitution to form OCA. The result is that OCA is 100 times more potent as a FXR agonist than natural CDCA.

What does this biochemical wizardry amount to in layman's terms? The FXR pathway is key in terms of reducing liver fibrosis, inflammation, improving fat metabolism, among many other biologically important functions. So, the basic idea underlying OCA is to stimulate this complex biochemical pathway in a manner that benefits patients with NASH, as well as other liver diseases. And OCA appears to be a powerful tool to achieve this goal.

Even if OCA ends up being used in only the sickest patients, or 0.3% to 0.9% of diagnosed NASH patients, analysts are still projecting peak sales of between $2.7 billion to $3.6 billion per year. So, if our ability to diagnosis NASH improves, all bets could be off. Put simply, OCA has the potential to become one of the top-selling drugs of all time, if NASH can be diagnosed without having to resort to a liver biopsy.

Additional value drivers in Intercept's pipeline
Oddly enough, the few analysts that were watching this stock weren't doing so because of the NASH trial. Most were focused on OCA's late-stage trial for primary biliary cirrhosis, or PBC, the drug's lead indication. OCA is currently being tested as a second-line treatment for PBC, with analysts suggestions that peak sales could top $850 million for this indication.

Although this trial is expected to readout in the first half of this year, the path to Food and Drug Administration, or FDA, approval is not yet clear. Specifically, the FDA may require another late-stage confirmatory study prior to approval, whereas Intercept aims to file for accelerated approval, enabling the confirmatory study to essentially become a post-marketing requirement. Looking ahead, Intercept is expected to initiate four additional clinical trials for OCA later this year. In sum, Intercept has a lot more to offer than a single upside surprise from its NASH studies.

Foolish wrap up
When considering OCA as a treatment for NASH, the drug looks to be one of this year's top clinical breakthroughs. Although participants in the study receiving OCA experienced higher levels of "bad" LDL cholesterol, I believe this side-effect is minor in comparison to the drug's benefits. And given the large peak sales projections for an effective NASH treatment, it's no wonder that a plethora of companies like Gilead Sciences, Novo Nordisk, Raptor Pharmaceuticals, among many others, are racing to develop their own treatments. However, despite this potential competition, I think Intercept still has more room to run.