Visionaries are what we look for when seeking companies to invest in. Long-term vision for expansion, impact, and, of course, profit all contribute to good investments.

Tech and telecommunications is a sector that is constantly evolving and even branching into other sectors such as health care and energy. Although we love the advances in technical hardware, the real tech and telecomm gems may be a bit softer. Social media has crept into our lives to take an important and essential role in our everyday experiences and is proving to be the next luxury and necessity for our communications needs.

Facebook and Internet expansion
After Facebook (NASDAQ:FB) made the huge $19 billion dollar acquisition of WhatsApp a few weeks ago, CEO Mark Zuckerberg took to the big stage at the Mobile World Congress event in Barcelona, Spain last week and spoke on Facebook's plans for the future. Zuckerberg defended his investment with key points of the initial success of the WhatsApp's userbase being at 500 million and that amount of usership is hard to come by.

Mark isn't stopping with the WhatsApp acquisition when it comes to his core mission to connect the world. His long-term vision is already coming into view with Internet.org, which is "a global partnership between technology leaders, nonprofits, local communities and experts who are working together to bring the Internet to the two thirds of the world's population that doesn't have it." The plan is to develop free Internet access for all at one point, with basic Internet and messaging services available for free in order to maintain connectivity with or without data carriers and plans.

Facebook is leading the Internet.org effort, making it a key player in the future of Internet and data services. Revenue for the full year 2013 was $7.87 billion, an increase of 55% year-over-year; and net income for the year was 1.5 billion. Q4 2013 revenue from advertising was $2.34 billion -- a 76% increase from the same quarter last year -- with mobile advertising making up 53% of that figure.
The livelihood of tweets
At the Goldman Sachs Technology and Internet Conference on February 13, Twitter (NYSE:TWTR) CEO Dick Costolo emphasized that Twitter is a "content, communications, and data platform." He views the platform as an indispensable companion to life in the moment that people use to discover and engage in conversations around moments. Costolo sees Twitter as a complement to all other media in existence, as it is the only site with the combination of real time Internet usage and a following feature that "paints a picture of personal interests."
Twitter's longevity is more focused around being a live communication link between advertisers, business, media outlets, etc. and consumers. The Amplify initiative is set to allow broadcast content to show short clips from partners, with a pre-roll (10-15 second commercial) in front -- somewhat like YouTube videos. Also, the company's recent acquisition of MoPub is set to help make the mobile platform and programmatic buying more efficient for advertisers and users alike.
The self-service ad program is perfect for the small business owner or indie entrepreneur to be able to launch an ad campaign that directly connects not only to the followers of the company, but also to the in-the-moment conversation.
In fiscal 2013, Twitter closed strong with a full year revenue of $665 million, up 110% year-over-year. Q4 2013 revenue alone was $243 million, and advertising revenue totaled $220 million, accounting for 90%+ of the revenue for Q4 with mobile advertising bringing in 75% of all advertising revenue. Fiscal 2014 revenue is projected to be in the range of $1.15 billion to $1.2 billion. 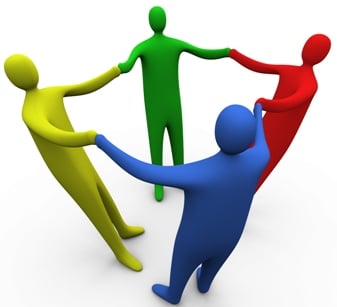 The big link
LinkedIn's (NYSE:LNKD.DL) recent acquisition of Bright, "a company that leverages data insights and matching technology to connect prospects and employers," was a strategic move to combine companies that share a vision of connecting candidates with employers via data and algorithms so to achieve the greater mission of connecting the world's professionals to make them more productive and successful -- creating economic opportunity for every member of the workforce.
LinkedIn has also recently expanded to China because of the country's steady GDP growth and emergence as a strong and competitive economy. This move also creates the perfect opportunity to create the world's first "economic graph." CEO, Jeff Weiner released in an article that:

We want to digitally map the global economy, identifying the connections between people, companies, jobs, skills, and professional knowledge, thus allowing all forms of capital – intellectual, working, and human –to flow to where it can best be leveraged.

LinkedIn also closed 2013 strong with revenue at $1.5 billion, up 57% from 2012's $972 million. Revenue for Q4 2013 was $447.2 million, an increase of 47% from $303.6 million in Q4 of 2012, with revenue from Premium Subscriptions products totaling $88.1 million. For 2014, revenue is expected to range between $2.02 billion and $2.05 billion with adjusted EBITDA expected to be approximately $490 million.
As far as social media and the Internet, all three of these companies can create a larger partnership within Internet.org in a collective mission to connect the world personally, professionally, and in real time. The future of the Internet is the future of our world, and with this tool being such an integral part of everyday life, why not put your money into the same things that you put your time and energy into?
This article represents the opinion of the writer, who may disagree with the “official” recommendation position of a Motley Fool premium advisory service. We’re motley! Questioning an investing thesis -- even one of our own -- helps us all think critically about investing and make decisions that help us become smarter, happier, and richer.